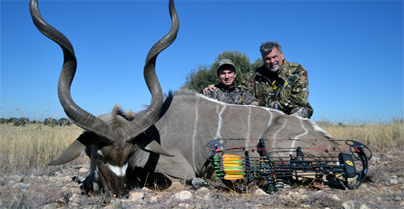 "What a giant Kudu bull! Wyatt made short work of this massive Kudu bull as well. We couldn't tel who's smile was bigger- Wyatt's or Scott's"

The bright, African sun beat down across sun-dried plains as a tribal elder quietly coached his grandson in their native tongue. Delivered in soft, short whispers, “…wait until the animal relaxes…. pick a target, aim at the target… now when your ready- shoot.” With a familiar “WACK!”- history had repeated itself once again. Heeding the advice of his grandfather, the young archer had successfully anchored a giant Kudu bull, and we were watching it fall as the celebration erupted.

“Yeah Wyatt! You got him… Congratulations! I’m so proud of you… You did great…” Smiles, laughter, and giant bear hugs (and not just directed at Wyatt) filled the mud colored hut. I had just been part of one family’s history- and was able to witness something truly special.

When I first met sixteen year old Wyatt Peary, I was truly impressed. Being a middle school teacher I have the chance to interact with many teenage kids. Wyatt is special, and immediately made a good impression on me. With a strong, firm handshake and direct eye contact, I thought he was a confident kid who had been brought up well. As I got to know him further, I learned that my first impression was spot on. Wyatt is the kind of kid that makes adults like myself excited for the future. Wyatt shoots with a mature grace not seen in many young archers and conducts himself socially in the same manner. He is easy to have a conversation with- yet wide eyed and young enough to know that he’s still learning from every experience. With a bold faith and strong character, Wyatt’s smile and healthy sense of humor put others at ease and show his great leadership potential.

President and CEO of Robinson Outdoor Products, Scott Shultz is busy accomplishing lots in his second career. He also accomplished much on his first career, and in his younger days Schultz was quite the competitive archer. Now in his “new” life, his demanding corporate lifestyle and dedication to family and friends leave little time for him to shoot for fun. Don’t get me wrong, Scott still shoots amazingly well, and as often as possible- just not competitively. Scott’s also a world traveled hunter, with trophy mounts and even bigger memories from all corners of the world. Being driven by his love for his family, strong faith, and a keen sense for right and wrong, Scott is a bull in the board room, and is proud of all of the families his company supports. But – like many of us, Scott’s an onion with many layers. Layers that sometimes can only surface on a wild African bow hunting adventure.

“Jason…” We were palling around in the airport on our way to Johannesburg, with a huge, earnest smile on his face and a slap on my back, “I like to say big plane ride equals big adventure…” Scott was explaining to me his philosophy on proximity to home in relation to vacations. For years I’d heard stories about Scott and his bowhunting endeavors. Now I’m proud to call him a friend, and often reflect on his impact on my life. Schultz has influenced me spiritually, and reassured me often that the way I’m bringing up my own children with a strong work ethic is the right way to do things. I often call Scott “a modern day Fred Bear” and he simply laughs. Not denying his passion for adventure, but always humble and never completely agreeing with me either.

On this particular trip, I got to witness his legacy in action. I got to see how Scott’s family values shined true through his grandson Wyatt. World traveled, corporate big wig, who serves on a number of committees and boards- Scott Schultz is really, behind the scenes, a loving and doting grandfather. The same man, who has traveled the globe taking all sorts of dangerous game with archery equipment is wrapped around his grandchildren’s little fingers. I remember the first time stepping in Schultz’s office. I was in awe of the exotic trophies from across the world, and listened intently as he shared their stories with me. Near the end of our conversation, he said, “Here are my real trophies..” and with a huge smile, pointed to several pictures of his family on his desk.

There were sixteen of us total, traipsing across South Africa with Wintershoek Johnny Vivier Safaris on the “ScentBlocker Safari”. People from all walks of life sharing one thing in common- an affinity for bow hunting adventure. I had the unique privilege of getting to know everyone well, as I hunted with my camera, with different parties each day. Scott organized the whole thing and the invite list showed a healthy cross cut of his life. There were old hunting/shooting buddies from back home in Pennsylvania, invited along to share in yet another adventure. Representatives from the Archery Trade Association were brought along to see the huge potential African bowhunting has to offer. Crews and hosts from outdoor television shows ScentBlocker’s The Chase and ScentBlocker’s Most Wanted were on-hand to share their hunts and continue to grow the sport. I was there to document the entire thing in picture and print. And of course, rounding out the guest list was Scott’s grandson, Wyatt.

Wyatt was there to hunt with his grandfather. Or, more like… Wyatt was there to hunt with his grandfather at his side. If memory serves me right, Scott picked up his bow to hunt one time the entire two weeks, taking a beautiful Sable ram. As usual, Scott’s hunt was rather eventful, but I’ll save that vivid tale for another time. According to my calculations, Wyatt was “high hook” or in this case, ”high arrow” with a total of seven animals taken on the trip! I was along on a few of Wyatt’s hunts, heard the stories from the rest, and cannot honestly say who had more fun- Wyatt or Scott!

One lucky day, where God just kept blessing us with encounters and great shots- Wyatt had already taken a beautiful Springbok and his giant Kudu- he insisted that I take a turn to hunt. We went to a new blind and eventually had a mature Springbok ram make it in front of my sights. I was treated like family, with Scott whispering encouragement in my ear right before I released my arrow, and Wyatt slapping me on the back as the animal fell. We all recovered the animal together, I got properly “initiated” to Africa by Scott himself as Wyatt took pictures. I realized the family’s love of the sport wasn’t a selfish one. Both Scott and Wyatt were truly happy for me and rejoiced in my celebration as well. I felt privileged to be welcomed into such a primal brotherhood and welcoming family.

Amidst all of the hustle and bustle of the trip- the laughter and hugs, Scott and I had a chance to talk privately. Scott cares about me as a person, so I shared a few things for a bit and then the conversation shifted to him. I was explaining how impressed I was with Wyatt and ended with this, “Think about your legacy- what you’re going to leave behind after you’re gone. Imagine the stories he’ll have about his “crazy bowhunting” grandpa who invited him across the world to share in the hunt. What an impact you’re having on his life.”

Scott’s response was nothing more than a simple, peaceful smile, and a nod of his head.

Later in the week, when we all had to say our goodbyes at the Atlanta airport, I watched Scott and Wyatt one last time. Realizing what special events I had been able to witness, I paid particular attention to their body language. Exhausted and homesick like the rest of us, but working as a team, the two bowhunters grabbed their luggage and vanished in the mass of people, laughing and carrying on about the newest chapter that they shared in their lives. With all of the attacks on family values that we see in America these days, it was nice to spend time with a family who loves each other. Missing my family terribly, I couldn’t wait to get home and hug my own wife and kids. I was left with reassurance by Scott to keep plugging away with my own family, and doing my best to raise my kids the right way. I am happy to say that Scott’s influence on family values stretches beyond his own, and my family is better for it.

If you would like to submit your successful hunting pics while wearing your ScentBlocker gear, you can please go to: http://www.robinsonoutdoors.com/tech-ed/trophy-gallery/