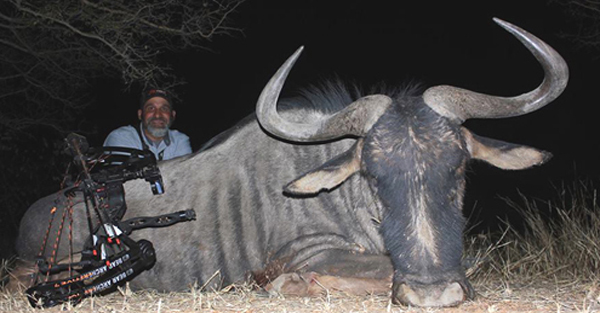 Bear Archery’s Matt Guedes goes to South Africa last year and was able to take 11 hunters to experience Sediba Nkwe Hunting Safaris. In this group was the likes of Don Dvoroznak of Ripcord Arrow Rests and Steve Wagnitz of Lakewood Products along with 9 other great guys.

I had the privilege of going to South Africa last year on three occasions. On my first trip of the year, I was able to take 11 hunters to experience Sediba Nkwe Hunting Safaris. In this group was the likes of Don Dvoroznak of Ripcord Arrow Rests and Steve Wagnitz of Lakewood Products along with 9 other great guys.

Our trip was a huge success on every level. These men were able to harvest 94 animals in their 10 day safari. There was only one animal that wasn’t recovered and more than 60% of those animals would qualify for Roland Ward. This trip was also successful because of the relationships that were built. Some existed prior to the trip and others were brand new. Needless to say is that by the end of the trip there were many lifelong relationships established. 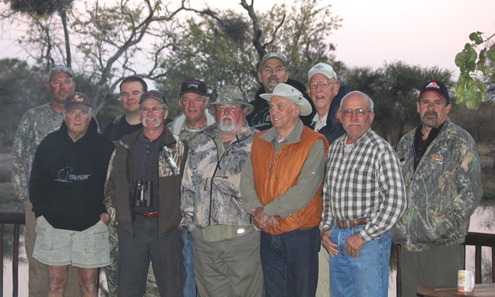 For most of Journey Hunts clients on this trip it was their first time to Africa. That first African Safari always brings with it a feeling of being overwhelmed, but it usually ends with guys planning their second trip while still on the plane on the way home. That was definitely the case with this group. Journey Hunts always strives to take out all the aspects of the trip that generally can lead to problems and to streamline the process so that the client only has to concentrate on hunting. 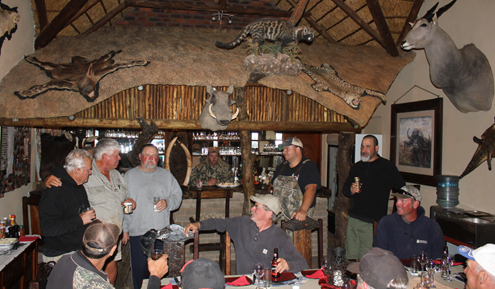 Just six days prior to this trip Bear Archery had sent me a Motive 7 bow to test shoot. At the time I was shooting for another bow company, but had fulfilled my commitment and time frame and was not under contract with any unfulfilled commitments. I always love shooting new bows and was glad to try this new Bear offering but truly didn’t have high expectations.

My mind was quickly challenged in that thought process. I got the bow out of the box and set it up immediately. I wasn’t even sure if I would be taking it to Africa because it was only 6 days away and I would personally have little to no time to hunt on this trip because of the size of the group. I sighted that bow in from 20 to 80 yards in 40 minutes. I was stunned at how accurate it was, how fast it was, and how little hand shock there was.

I shot the bow each day that week and decided that I would take it along just in case I got an opportunity to hunt with it to see what it can really do. Because of the number of animals that were being hunted by the group, I ended up working all week in camp. With two days left in the trip, most of the guys had harvested all the animals that they had wanted. This opened up the opportunity for me to hunt.

I had brought two bows with me. My sponsored company and my “test bow”. I decided that I would take my son out that first day and that he would be the first shooter. He was able to harvest a great Blue Wildebeest with his bow. The mammoth animal only went about 70 yards as he heart punched it with his arrow. We now would have one day left and I had a decision to make.

I decided that last evening to take out my Bear Archery Motive 7 to really put it to the test on a live animal. It had performed well on the range, but now we were in a real hunting scenario.

We got into the blind and I was down to the last hour. We had seen many animals, but I was hunting only for a Zebra or a Blue Wildebeest. With about 30 minutes of light left, a big herd of Wildebeest approached. There was one male in the group that was massive, but I couldn’t seem to find an opportunity to shoot him. They mingled around for about 15 minutes and then the opportunity came.

I picked up my Motive 7 and ranged the Blue at 25 yards. I drew back my bow and put my 20 and 30 yards pins from my Trophy Ridge 7 pin Hit Man .010 pins right above and below the heart. I settled in and let my Black Eagle Deep Impact arrow fly. The hit was perfect. As the Blue Wildebeest ran off, it hit the deck 60 yards away and within view of our side window in the blind.

My son Tekoah and I left the blind and walked over to the beest. It was heart punched and all the components of my set up performed wonderfully. The cut from the Rocket Ultimate Steel was perfect. My Motive 7 test was completed and the result was one Blue Bear byproduct.

I came home and contacted the team at Bear Archery. I was thrilled to report to them all the discovery that I had accumulated in using their new bow. I instantly struck an agreement to shoot for Bear and I have only found the same results of great bows and equipment, incredible customer service, and most importantly great people within their organization. I now call this simply the best bow decision that I have made in the outdoor industry.

To shoot your best be sure and go to: Bear Archery Company and for more bowhunting adventures please go to: Bear Bowhunting