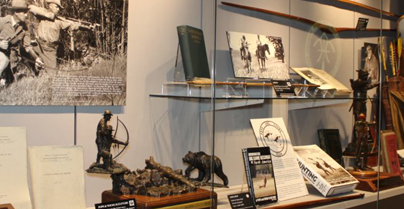 The other day I watched some of the Pro Football Hall of Fame inductions, where some of my football heroes are housed. Almost all of those “heroes” are Steelers, and goodness knows, there are a bunch of Steelers in that hallowed Hall. And “hall of fame’s” are for heroes. I don’t care if it is the Rock and Roll Hall of Fame or the Pro Football Hall of Fame, such homes are for heroes. People who did their best, made a mark, and made their discipline, whatever it is, better. 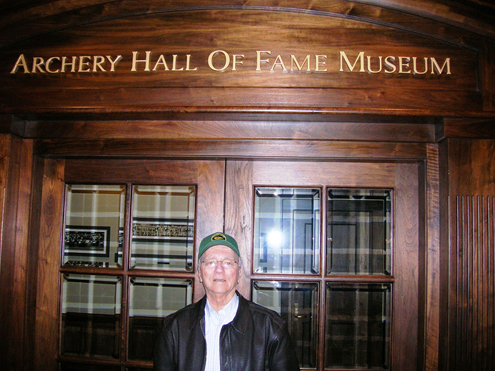 Some of those in the Hall have names familiar to most bowhunters. You will recognize the names of the men and women who were inducted in the first class of 1972; Fred Bear, Howard Hill, Ben Pearson, Maurice Thompson, and Ann Hoyt. You say you never heard of Maurice Thompson? Shame. A writer and archer who was born in 1844, and after the Civil War he wrote “The Witchery of Archery.” This book contained stories, some humorous, about the equipment used in archery and how to use it to bowhunt. Up to that time, most archery was practiced by Native Americans, but this book sparked a big interest in archery, and led to the election of Mr. Thompson as the first President of the National Archery Association in 1879. 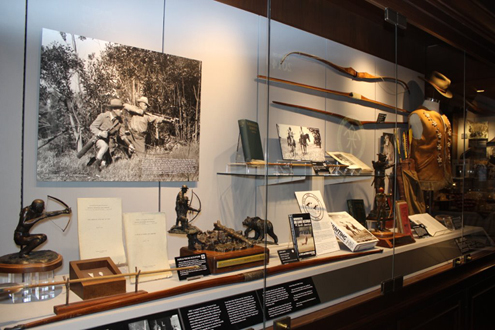 The Hall of Fame display of Art Young and Saxton Pope.

As an aside let me note something a bit scary, but a sign of our times. Go into an archery shop or shooting range today and chat with some new, young bowhunters. Lots of them never heard of Fred Bear. A shame because quite simply, Fred Bear was the father of modern bowhunting.

Yes, and he was the founder of Bear Archery. For many of us older guys, his bows were our first bows. I had the pleasure of hunting with Fred Bear on one of my first out-of-state bowhunts, over 50 years ago. And over the years we talked on occasion, either about the anti-hunting movement, or bowhunter education. He was a good man, and would talk to anyone. Even a young novice like me. 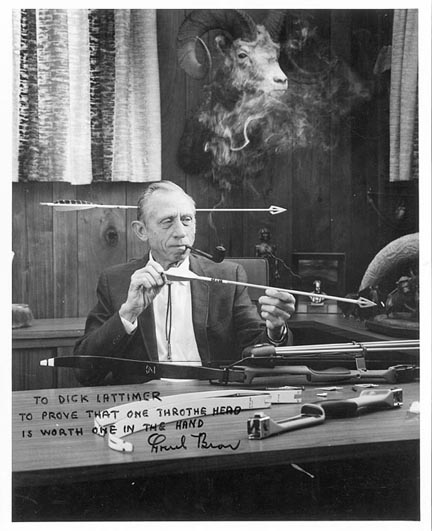 Papa Bear, the immortal Fred Bear showing a comical side.

Saxton Pope and Art Young were inducted in 1973. If you don’t know who they are, and some of you will not, then google their names, or better still, go to the Archery Hall of Fame website (Archeryhalloffame.com) and look them up under “inductees.” Without them, who knows when archery as we know it, bowhunting as we know it, would have happened.

In 1974, Doug Easton was inducted into the Hall. When he was 15, he suffered gun wounds to both legs, and while recuperating, he read Saxton Pope’s book, “Hunting With the Bow and Arrow.” That stimulated Easton to start making yew bows and cedar arrows and in 1922 he began selling those arrows. Not satisfied with his inconsistent cedar shafts, in 1939 he made the first aluminum arrows. Do you think he had any idea where that would lead? 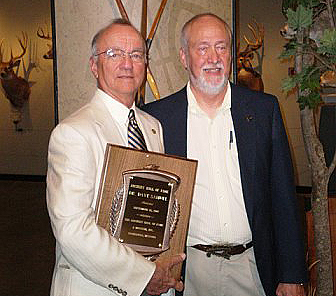 The author at his induction in 2007 with fellow AHoF inductee, author and Founder of Bowhunter Magazine, M.R. James. 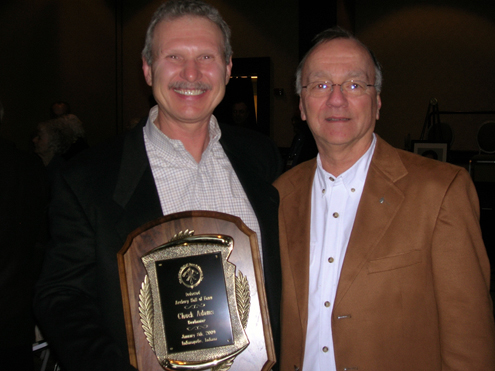 Author with another archery/bowhunting hero at his induction in 2008, Chuck Adams.

The mission of the Archery Hall of Fame is to preserve the history of archery and bowhunting by honoring outstanding members of the archery community. The Hall’s museum is located at BassPro Shop in Springfield Missouri. It exists because of great financial help from many, including Earl and Ann Hoyt, and Johnny Morris the founder of BassPro. Mr. Morris provides a full time curator, and others who make this engine run. And does this engine run? Last year there were over 340,000 visitors to the Archery Hall of Fame Museum. Last Wednesday (July 29th as I write this) there were 1,400 people who went through our museum. And that was the middle of the week. Amazing. 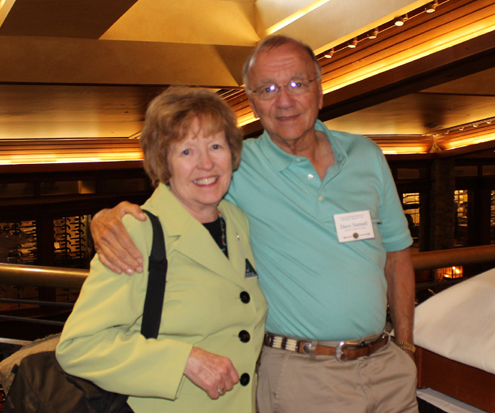 If you have never been to the Archery Hall of Fame Museum, you really need to go. I say that not because I was inducted there in 2007 (the greatest honor of my life by far), but because history is important, critical. And the museum is full of history. The website is too. I find the history of each inductee on the website, fascinating. As I toured the renovated museum for the first time, and gazed at the etched glass wall covering one entire side of the museum where each class of inductees are described, seeing my name and etched picture up there was humbling. This was made more so because another inductee in the class of 2007 was Ishi. Whoa. I mean humbling. 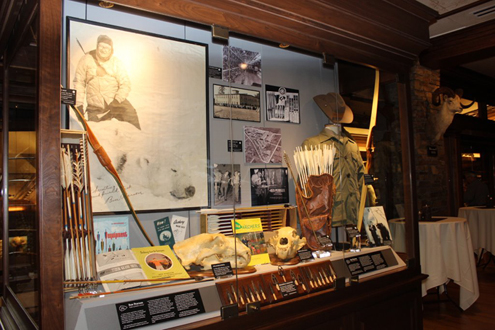 The display for Ben Pearson.

When I am long gone from this world, archers, bowhunters, non archers, non bowhunters, might stride by that wall, see my name, and ask “who was that guy? Who was that Dr. Dave guy?” Maybe they’ll read the inscription and find out, but maybe they won’t. Because the truth is that some walk through the museum and just quickly look at the displays of bows, arrows, books, watch an old Pope and Young video, and walk out. Maybe they were only in the museum for 15 minutes, but they at least left with an impression that archery and bowhunting has history.

Then there will be others, like my good buddy “Pip” Pippinger, who recently went to Branson, Missouri to celebrate his anniversary with his lovely bride of one year. When I heard that was where he was going, I told him. “Pip, you’ve got to go to the Archery Hall of Fame Museum.”

Pip sent me a text while in the Hall, and he loved it. I knew he would, and if you all are the bowhunters I think you are, you will love it as well. 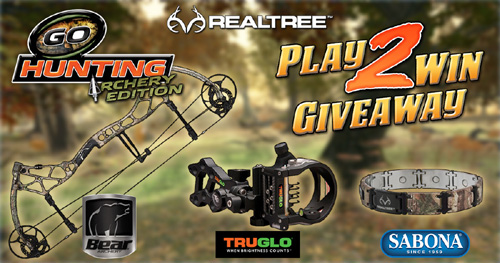 Play the GoHunting Game & Enter the Sweepstakes Too! 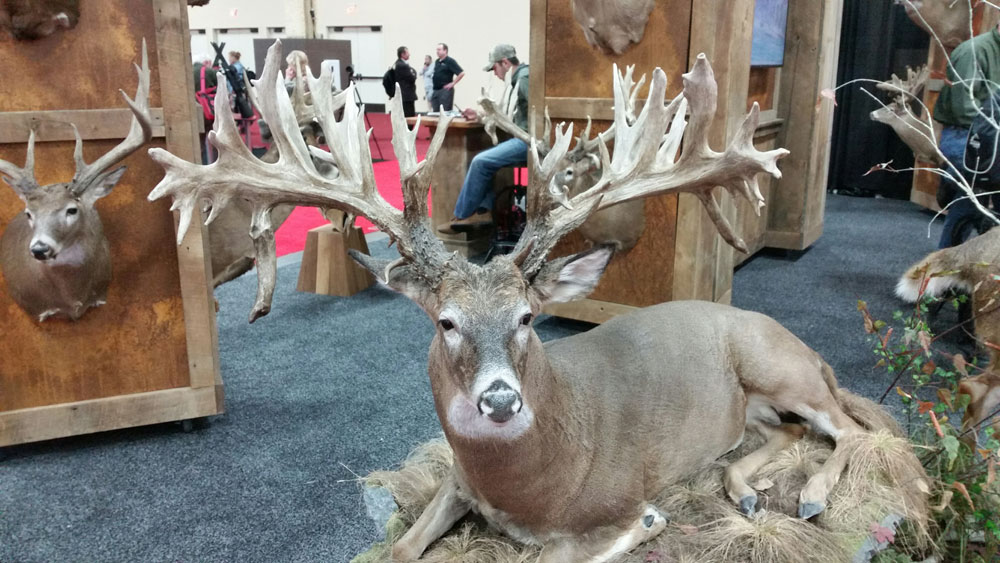 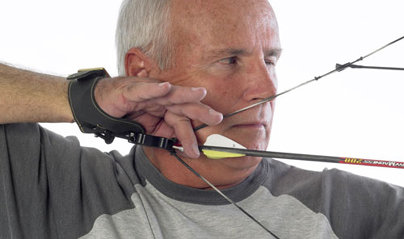 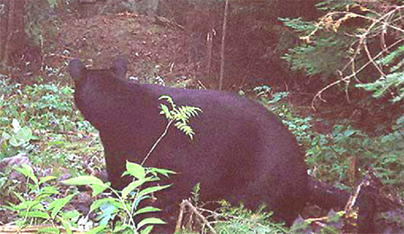