by Paul Murray
in Bowhunting Posts
0 0
A A
2 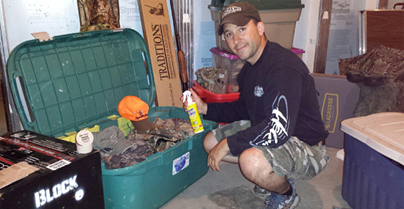 When I started hunting, our camo and hunting gear was washed once a year at the conclusion of the season in regular clothing detergent then stored in the basement in a garbage bag. Really, that was the way we did it. Today that sounds crazy, but now I have a much more effective way to control scent.

One Day last fall, after a long day in the office. I found myself driving home admiring the changing late September leaves. Then as I walked from my truck to the house, the scent of fall filled my nostrils. I drew in one last deep breath through my nose and into my lungs before I walked in the door to the house. We were only a week or so from the opening of the archery season here in New York.

As my hand twisted the door knob, the door barely opened before my thought of what heaven most certainly must smell like was chased from my nose and my mind. The scent of one of my future step-sons cologne was over powering all the smells in the house. Including the scent of the venison roast my fiancé just pulled out of the oven.

Over dinner we discussed who was ready for the rapidly approaching bow season. The boys immediately said, “I’m ready.” I have to say, knowing what I know of these guys. Generally speaking, when they tell you they are ready to do anything, they are not. So, because I had my doubts to the validity of their claims. I had to ask, “Is your stuff ready?” Both replied, “Uh-huh.” I now knew they were completely full of it.

As we cleared the table, I told the guys, after we’re done here, to get their bins with their camo and bring them down so we can “verify” how prepared they were for the upcoming season. With smiles on their faces they carried the bins down to the living room, and I have to admit, I was impressed that they had all their stuff in their bins and organized. But there was one thing out of place. None of their stuff was washed and scent free.

As we washed the kid’s clothes I started to explain about a deer’s nose and its sensitivity. I began with, if you can’t beat your own nose it’s safe to say there is little hope of beating a whitetail’s nose. Because, my guys understand the way computers save information. I had an idea, to impress on them how important it is to try to be as scent free as possible. My idea was to make a comparison between the olfactory nerve and brain of a whitetail to that of a computer that saves and files information. I began with, the time the fawn is born until he draws his last breath. Every breath a deer takes in, it makes a memory of and saves that information. If a deer is used to smelling nothing but the woods and the fall air, as soon as he smells something that is foreign to his nose he goes on alert. As the deer ages he becomes less tolerable of foreign scents in his area. It only takes one wrong whiff to send a mature buck from the immediate area of your stand. Unfortunately this happens so often that most hunters probably don’t know that the buck is in the area because the deer winds the hunter from so far away. We then discussed hunting specific stands on the proper wind.

When I started hunting, our camo and hunting gear was washed once a year at the conclusion of the season in regular clothing detergent then stored in the basement in a garbage bag. Today that sounds crazy, but what did we know? Eventually, the beginning of the scent free era arrived.

The beginning of the scent free era started for us, with us washing our stuff in the washing machine with baking soda and air drying outside on a clothes line and leaving it all hanging that way until a few good rains gave it all an extra rinse. I have to admit we did this for a few years, until I got bit up by spiders that moved into my clothes while they were out on the line.

At some point in the late 90’s I stopped storing my stuff in garbage bags and got a large lockable, air tight Rubber Maid tote to put all my gear in. Over time, as my gear and clothing began to over fill the tote, I have added a few more totes to my collection. Around this time unscented detergent, shampoo and soaps made their way onto the scene. The slow learner that I am, it took some time for me to put the pieces of the puzzle together and figure out if my clothes are scent free maybe my skin, hair and breathe should be scent free as well. Then, it hit me. One evening that fall, while I was raking leaves in the yard, dreaming about being in a tree stand, enjoying the scent of the decaying fallen foliage and the scent of dying golden rod a light bulb went on in my head. What if I made my clothes smell like the scent of the fall air?

Like I said, I’m a slow learner. Shortly thereafter, bottled fall scented products and scent free products were on the shelves at local retailers. To say I have tried them all would be a bold face lie. I have tried a few and have come to count on four products that I buy every year to help minimize my human scent. Each September when the leaves in the North East start to change from their bright green of summer to the vibrant reds, oranges and yellows of Western New York’s autumn my process goes into action almost as if I am affected by photo-period like the big game we hunt.

My System: Once my stuff is washed and completely dried I fold it and place it neatly into my totes. I pick up a pack of Hunter Specialties Fresh Earth Scent Wafers and place one or two in each of my bins right on the clothes. In conjunction with the scent wafers I also add a handful of fresh leafless golden rod stalks clipped to about 2-3 inches in length, a paper lunch bags worth of freshly fallen maple leaves that are still waxy and a few small freshly cut hemlock bows into each bin. Then I close and lock the bin and do not open it until opening day of the bow season. It usually sits closed for about 2-3 weeks, with my clothes and hunting accessories soaking up that fall scent.

The second part of scent control system is my personal hygiene measures. The second product I rely on every year is Hunter Specialties Scent Free Green Soap. Most people I’m sure use it prior to going hunting, not me. I shower with it and use unscented deodorant every day from one week prior to the opening of the bow season until our primitive arms season closes the week before Christmas. Also, all of our household laundry is washed in scent free detergent and scent free fabric softener dryer sheets. My very understanding fiancé drew the line at using earth scent dryer sheets for our everyday laundry. Like I said before, my fiancé and future step sons are not very far off with their opinion of my obsessive compulsive personality traits. Well, at least when it comes to preparing for whitetails or other big game.

Right now we’re in the end of summer. We have about 1 month before bow season opens. Just like everyone else I have shooting to do, food plotting work to do, tree stands to hang and make sure my gang is ready for the season opener. It may be mid August but it’s never too early to start thinking about scent control. If you’re a passionate big game bow hunter like I am. Your quarry’s nose should be the first thing on your mind. Because it only takes one sniff to miss the chance at the trophy of a lifetime.