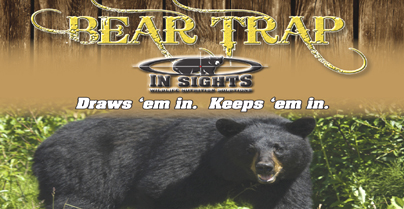 People in North America have been hunting bear for hundreds of years. Now there is a new attractant to help with those hunts; Insights Nutrition’s Bear Trap.

This new pourable attractant is berry sweet syrup made with real sugar but no unnecessary chemical fillers. Bear Trap comes in a convenient 1 gallon, pourable container, which is both easy to transport and use. The Insights Nutrition website touts “BEAR TRAP™, the irresistible sweet syrup that Draws ‘em in – Keeps ‘em in.”

We started several bait sites in Saskatchewan and topped them off with the Bear Trap syrup. I noticed immediately how good it smelled and could not resist sticking my finger into the syrup and sampling just a bit. It was delicious! I almost decided to hoard some to pour over ice cream, but this is bear bait, not Diane bait! I poured a small amount at the base of a pine tree near my stand, away from the bait site, just to see if this product was drawing them in or was it the combination of flavors. Time after time I witnessed bears coming into the bait, then turning and walking directly to the pine tree and lick the syrup from the base. As the bears would leave the area, they were spreading a scent trail throughout the forest with the syrup that clung to their paws, drawing more bear into the sites.

In one day of sitting on stand, I saw 11 different bears come in and sample our offering; most came in multiple times. Checking the trail camera pictures, there were new bear coming in every couple of days and still the others made sure to come in. This was fast becoming our hottest stand.

The morning of the 3rd day, I unintentionally chased a big cinnamon color phase boar off the bait when I came into the stand. I had a good feeling he would be back for more Bear Trap. I settled into my tree stand and waited.

Just an hour and a half later, a black sow came in and I felt the cinnamon boar would be close on her heels. Not more than 30 seconds later, sure enough, here came my boar. Soon both bears settled in to eat their fill of bait and lap up more syrup off of their paws. When the proper shot was presented, I took my shot and my cinnamon boar was truly mine.

Three days later, a 7’ chocolate color phase boar was taken off of the same stand and, yet again, early the following week another near 7′ cinnamon boar was also taken at the same site; 3 trophy bears in just 8 days at the same site! Bear Trap was proving its effectiveness.

The MSRP on the gallon size of Bear Trap is $11.99 and can be purchased at  In Sights Nutrition

And, as great a draw as their Bear Trap is you will also want to check out their line of Deer and Hog products. In Sight Nutrition: Draws ’em in – Keeps ’em in.

For more please go to: Ladies In Camo Column

For more please go to: Ladies In Camo