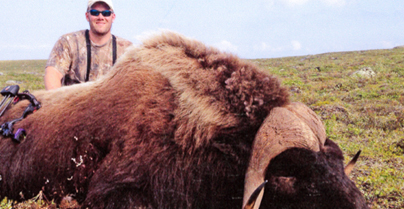 In August 2013, Brian Keith traveled from his home state of Texas to the Contwoyto Lake region of the Nunavut Territory in Canada to hunt muskox. Muskox are often hunted in the bitter cold of winter or early spring on the islands of northern Canada. This hunt, however, was on the mainland and during the summer, which can make for more pleasant, and exciting, stalking opportunities. On the fifth day of Brian’s hunt, a successful stalk paid off and yielded this extraordinary bull muskox. 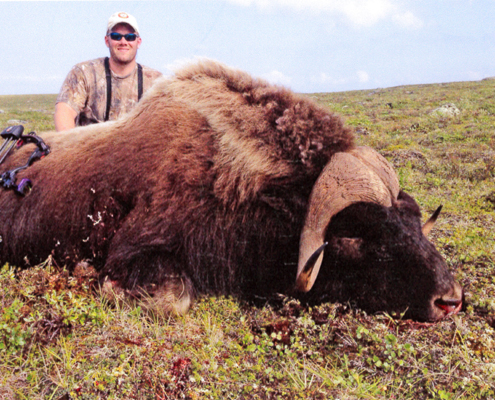 Mr. Keith’s muskox has an initial entry score that is 2/8 of an inch higher than the current World’s Record. It is yet subject to Panel Judging verification, which may change the final accepted score for a variety of reasons, including unusual shrinkage, initial mis-measurement, etc. This muskox is entered into the current, ongoing 29th Recording Period—the biennium representing entries accepted into the P&Y Records Program from January 1, 2013 to December 31, 2014.

At the close of every two-year biennial recording period, numerical awards and honorable mentions are awarded to the most outstanding animals in each species category that have been entered during that recording period. New world’s records are verified and proclaimed, and awards are presented to these outstanding animals during the Pope and Young Club’s biennial convention and awards banquet.
Prior to the actual convention and banquet, outstanding trophies are requested to be sent to a designated site for panel judging. Panel Judging is a process of verification of the final scores of antlers, horns and skulls of the highest ranking North American big game specimen entered during that two-year recording period. A hand-picked team of highly knowledgeable and experienced certified measurers gather for the actual scoring.

Congratulations to Mr. Keith on this incredible animal! The Keith family are longtime friends and loyal supporters of the Pope and Young Club (several whom are members). They donate a Texas whitetail deer hunt on their ranch for the conservation fundraising auction at each P&Y National Convention. We are very grateful for their support. Look to see this outstanding North American big game specimen, plus roughly a hundred more of the biggest and best over the last two years, on display at the Pope and Young Club’s National Convention in Phoenix, Arizona, April 15-18, 2015.

Established in 1961, the Pope & Young Club is a non-profit North American conservation and bowhunting organization dedicated to the promotion and protection of our bowhunting heritage, hunting ethics and wildlife conservation. The Club also maintains the universally recognized repository for the records and statistics on North American big game animals harvested with a bow and arrow.