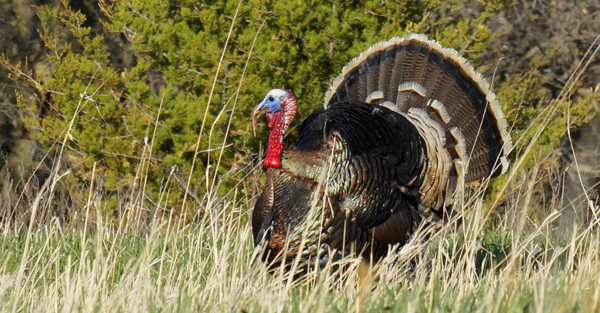 After my last Nebraska bowhunt, Terry, the landowner of the farm Fred and I hunt in Nebraska drove me to Gregory, SD, a half hour drive. He dropped me off at the Double K Guide Service hunt headquarters in Gregory. Head guide Jeff Quinn took me out to an area with sprawling hills and set up a Double Bull ground blind for me. This was where Chef Klaus had bagged his big gobbler.

I saw about a dozen wild turkeys during the afternoon. The wind was blowing like crazy in the opposite direction and I don’t think they could hear me call at them. 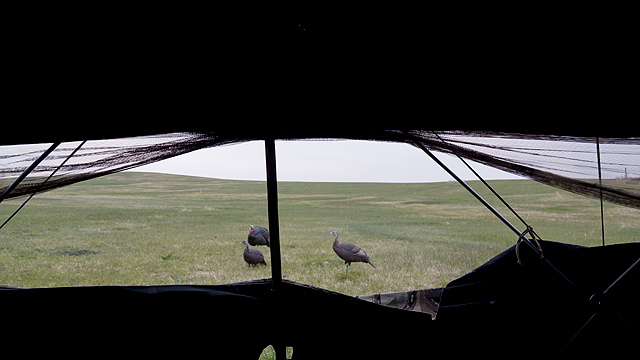 The next day Collin Cottrell came with me and we hunted an area up above a valley with lots of trees and brush. A good looking South Dakota type turkey hunting place. 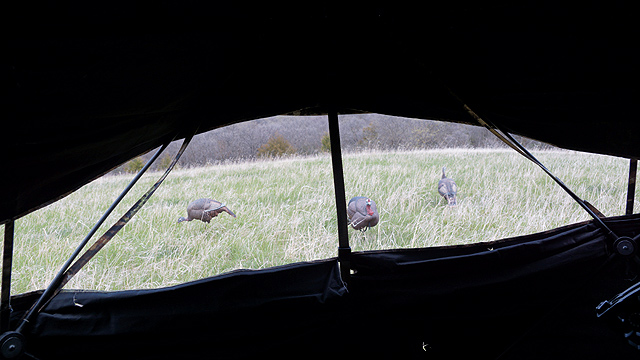 Collin called in two large Jakes. We passed on them. 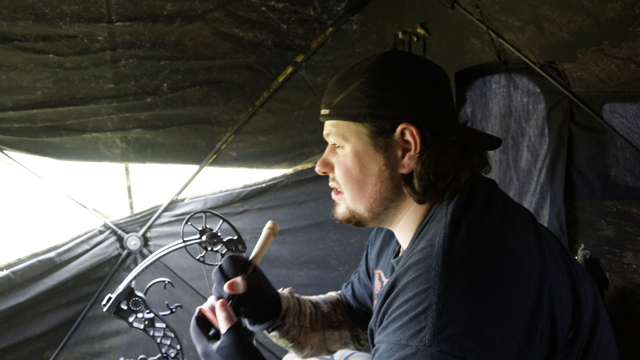 Later Collin called in two longbeards that were following a hen. They broke away from the hen and circled our blind and checked out our decoys. They came “almost” close enough. Then the gobblers re-joined the hen and followed along behind it. Collin and I had only one day left for our South Dakota hunts, we were going to Minnesota next and had to get on the road. 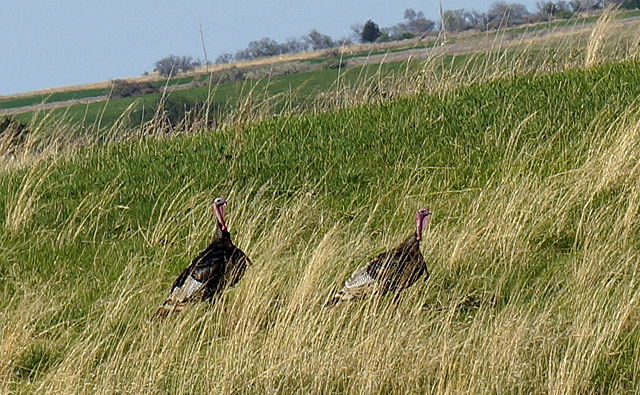 Jeff Quinn took me to a similar area, sprawling plains next to a draw full of trees and brush. Jeff set up my blind in an “L” where the draw curved. It was a good looking wild turkey place. 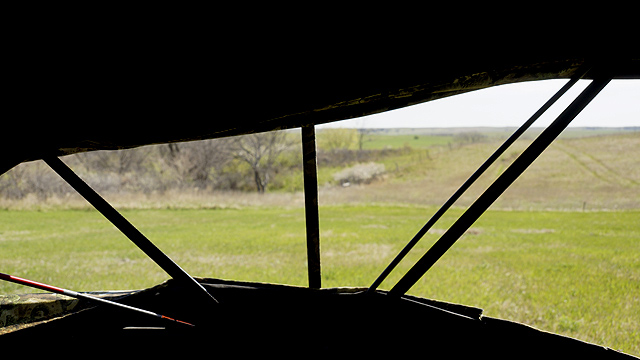 I heard gobbles in the draw to my right and called at them. They ripped it up with gobbles and I spotted them in a small opening in the trees. Three longbeards, and they changed directions and came up the incline to the edge of the woods. But I noticed two hens coming out of the woods ahead of the gobblers, and none of them came my way.

Later that afternoon an unseen gobbler in the woods to my right gobbled for over half an hour. Finally his gobbles started getting closer.

Soon, I saw him walking on the edge of the drop off. I called at him and he showed me his fine fan. I took his picture. It was now late in the afternoon and things looked promising. 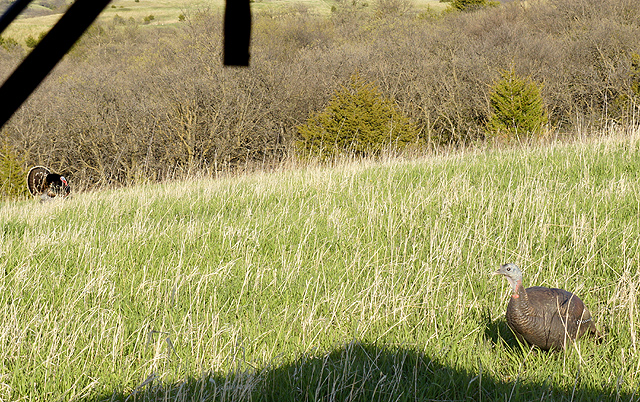 The full fanned longbeard moved a little slower than I liked but he continues to advance. I stopped calling, leaned my bow against my knee, and took some more pics. 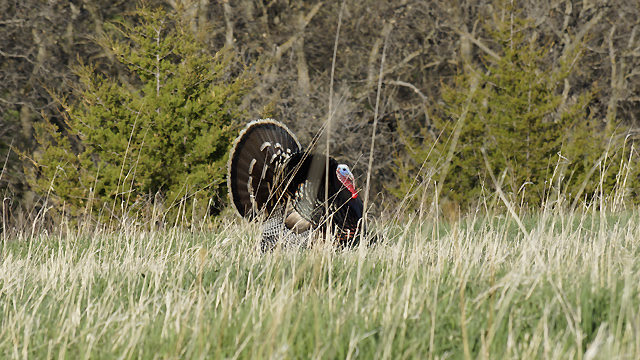 He strutted just past my decoys. I called at him and he turned and faced the other direction. My Leopold rangefinder gave me a read out of 54 yards. 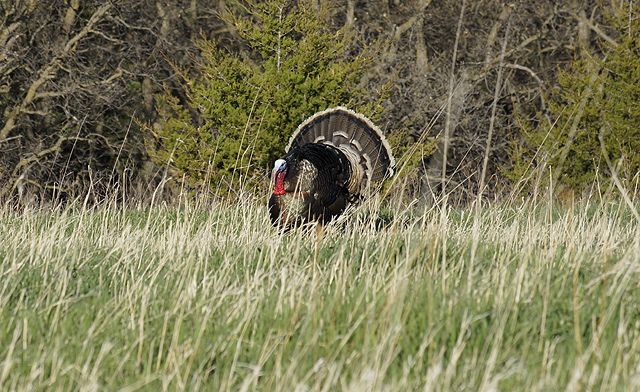 Still in full strut, he took several steps toward my decoys. Now I ranged him at 42 yards. 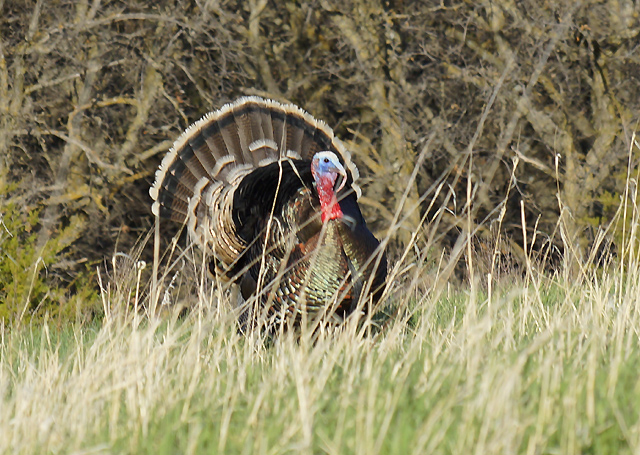 He came even closer. Now the Leopold read 29 yards. I wanted him a little bit closer. He jerked his head left and right and let his Snoodle hang down alll the way. 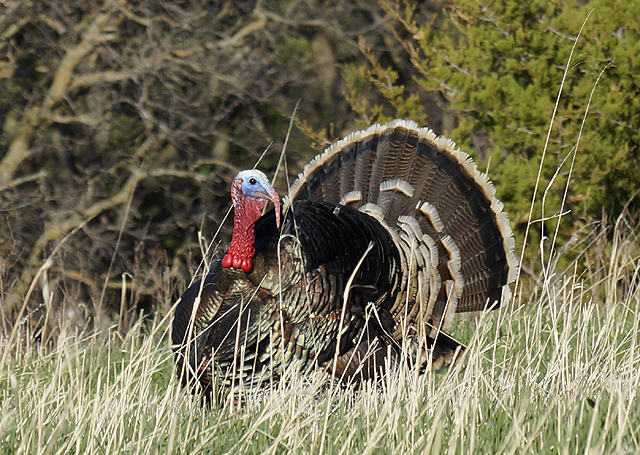 He waited in place, looking at my decoys. It was one of those “to call or not to call” situations. I remembered something Doug Crabtree Sr. told me once after he had a lengthy calling session, “He knows where I am, I’m gonna shut up and let hem decide what to do.” So I didn’t call start calling again. 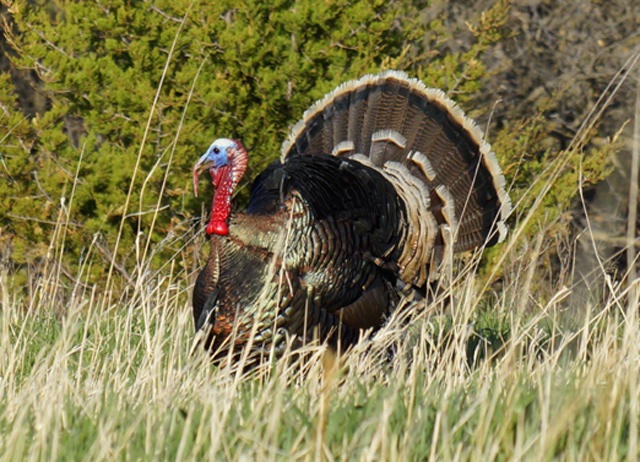 The gobbler had burned a lot of time and the bright sunlight dimmed a little. He watched a while longer and then dropped strut. And walked into the trees and down the hill …  and ended my bowhunt in South Dakota.

I didn’t tag a gobbler this trip but it was, as always with my previous turkey hunts with Dougle K Guide Service, it was a fun hunt and this afternoon I definitely added to my Merriam’s wild turkey photo collection.

The next morning we left for Minnesota.