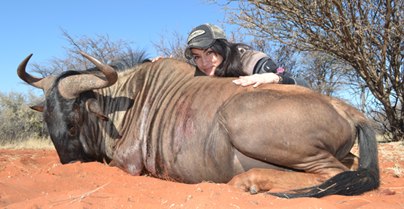 Even though it was the dead of the African winter, where food and water were scarce, these animals still had their wits about them. I thought there would be a mile long line to the local waterhole but nope- we were getting busted. “Those PH’s stink”, Scott said with a half joking laugh- although I knew there was a lot of truth in his statement. Human scent control in Africa is hard to accomplish- but not impossible. We were often miles from civilization, in extremely remote areas that would be dangerous and difficult to walk to. Our only safe option was to ride in the trackers’ trucks, and get dropped off at the blinds. Getting dropped off by a truck would litter the area with human scent, but like I said- we had no choice.

We all laughed at the PH’s (Professional Hunters) because no matter the weather, they always wore the same thing; hiking boots, drab earth-tone pants, shirt, sometimes a vest, and baseball cap. Needless to say, the PH’s aren’t well versed in modern scent control techniques. They of course made fun of us, with our high tech camouflage gear and sprays. By the end of the trip, however, the proof was in the pudding. Our scent control efforts were working. The ScentBlocker Safari team was stacking up a body count that those South African guys will be talking about for years to come. 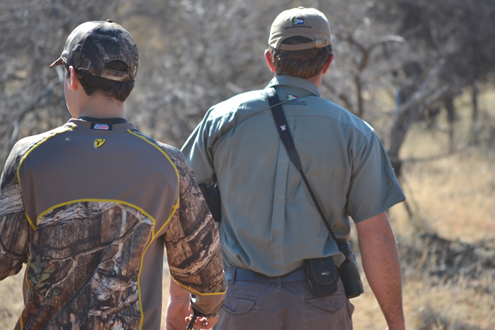 Young Wyatt and PH Johan on a spot and stalk hunt.

I was curious what African people did before the modern influx of scent control products. What I learned was rather interesting- both the ancient and modern Africans are pretty resourceful. But on a once in a lifetime safari, with few precious days to hunt- I’ll take my modern scent control amenities over these old fashioned ways anytime.

As with anywhere across the globe, the ancient African tribesmen soon realized that their prey lived and died by their noses. These hunters never dare do anything without the wind in their favor. Not only can getting busted ruin their hunt, but the animals tend to run a very long way off, spoiling any second chances at redemption. And… to make it even more of an event, these tribesmen depended on being successful hunters for their survival! The animals were out to survive, the tribesmen had families to feed- it was a high stakes game. So, the end result is that these primitive hunters could only dare stalk an animal, or set up on a water hole when the wind was perfect. Our trackers, descendants of ancient tribesmen, would often kick up dry sand to check the wind, or crumble dry leaves and watch them ride the breeze for a hint at its direction. The problem? From what I noticed, the African winds shift often, leaving for a very frustrating hunt.

The next step in African scent control evolution is the use of cover scents. One of our PH’s showed me a trick during an early morning hunt. Everything in Africa has thorns, and everything can kill you, but he somehow safely grabbed a few leaves off a bush. These bushes were everywhere and I tried to avoid them at all costs due to their impressive armor of thorns. The PH, Yvan, tore up the handful of leaves and smeared them all over his exposed skin. Then… he had me smell his arm. It smelled like something out of my wife’s herb garden- natural… yet pungent. I forgot what he said the name of the bush was, but I do remember him saying it was used as a cover scent. Stripping down nude, hand picking leaves to mash, and hoping I didn’t accidentally grab a thorn? Nope… still not for me. 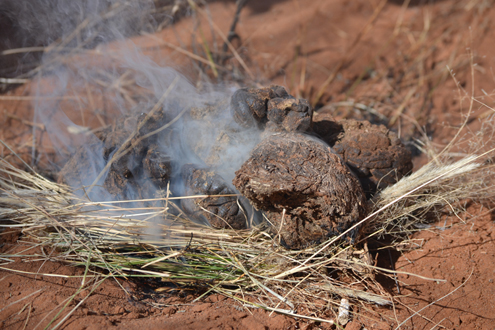 With little to no firewood in certain places, burning dung is commonplace in Africa for heat and cooking. One of the PH’s Johan showed me a very memorable trick. Early one morning we gathered a large amount of very dry dung. We then placed small piles of the dung strategically around our blind. Johan then went to each pile and set it aflame with a lighter. His theory is that the odor of the burning dung would cover up any human odor. Also… for some reason he said the local warthogs liked the smell of the dung smoke and would come running!

Not long later we were nestled back into the blind. The wind had shifted again and one pile of burning dung was billowing smoke right into our hiding spot. We were choking and gagging and gasping for fresh, clean air! Johan was laughing hysterically as Wyatt and me struggling to breathe. Ironically, while were choking to death in the blind, a family of warthogs did come in to investigate.

I remember later that evening my roommate, ScentBlocker’s Most Wanted Cameraman Josh Hill came into our room, and proclaimed, “Something really smells terrible in here, like burning poop”. He was right, and it was my hunting gear he was smelling. Lesson learned- I think the burning dung trick probably will disable any animal’s olfactory system for miles around, but why would anything other than a warthog come to investigate?

Ahhh… back to my reality. While on safari in Africa we of course used our ScentBlocker gear to its fullest extent. Scott brought a bunch of powdered concentrates for us to mix with water (traveling with liquids to Africa wasn’t practical) to make the scent control liquids we craved! We all relied heavily on Trinity Blast spray and of course, our Trinity synthetic scent control clothes. The ultralight Trinity gear was perfect for layering in Africa because the early mornings and late evenings were cold, while the days were hot. I made sure that my gear was all washed in scent free detergent before leaving, and stored in my airtight scent free storage bag. I only wore my clothes to hunt, and like back home during deer season, took them off before entering camp. 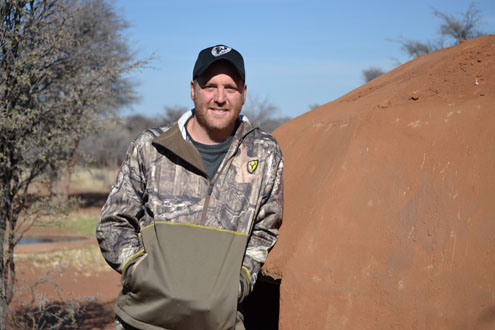 The author all decked out in Trinity scent control gear while on safari in Africa.

During the hunt I described at the beginning, when we realized the animals were winding us, Scott sprang into action. “Everyone stand up… close your eyes…arms and legs spread apart” This must be what it’s like getting arrested I thought. I have never been drenched with that much spray in my life, and I’m pretty sure Nicole felt the same way. However, from that point on, the animals we were seeing didn’t wind us! In fact, Nicole took a beautiful Wildebeest and Impala that day, hours apart- out of the same blind! 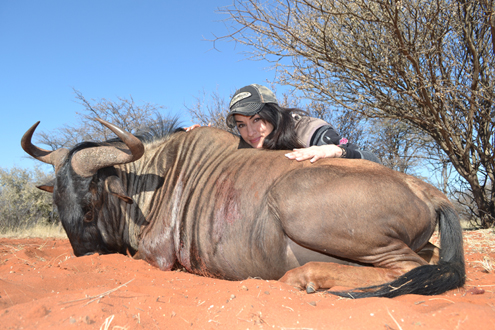 Nicole McClain with her massive wildebeest. 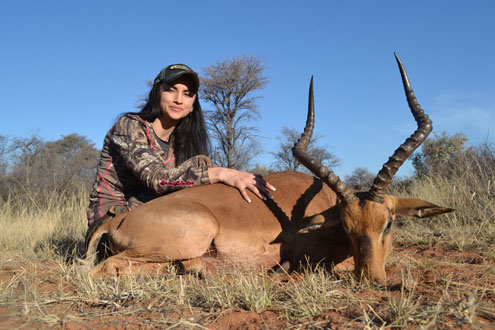 And with her beautiful impala.

Human scent control is a global issue because very few game animals in God’s kingdom walk around without the wind in their favor. Thankfully for us, the learning curve in Africa was quick and we had the proper technology to put the odds back in our favor. ScentBlocker- even in Africa, it’s the advantage of science. 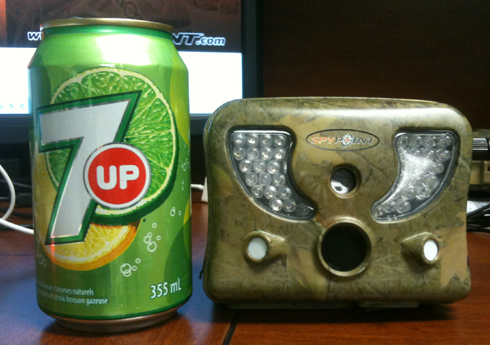 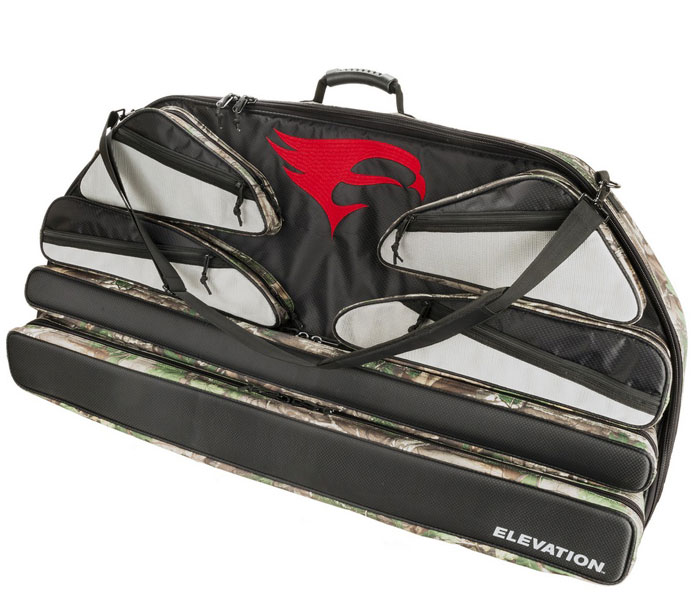 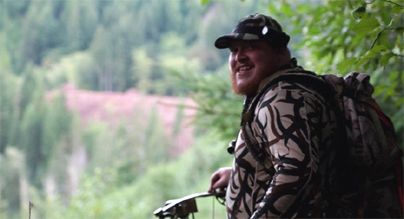