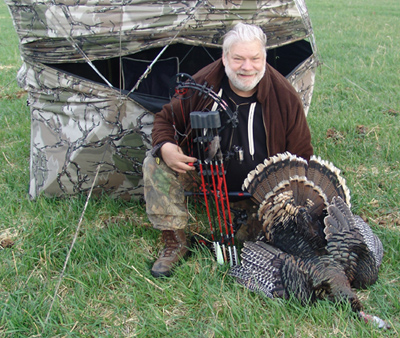 With his 3 gobbler tags all used for Longbeard Nebraska gobblers, Fred Lutger left the farm of our Nebraska friends and drove the short 30 mile distance to Gregory, South Dakota. He met Mike Ditchler (Chef Klaus) and the Chef Klaus Bier Stube restaurants manager and head chef Ernie and Savano. Savano had brought the necessaries to cook a great German food Meal and after they prepared the dinner Fred joined the group and had a great supper.

On the first morning Fred went with Mike to do the calling. That bowhunt ended successfully when Mike arrowed his first archery wild turkey gobbler. Later in the day Jeff Quin took Fred to a different area and Fred some gobblers but they were too far away.

Jeff Quinn took Fred to a South Dakota farm and they set up overlooking the juncture of two valleys. After daylight Fred saw some distant gobblers.

An hour after sunup Fred heard a gobble behind him. He looked behind the blind. Two longbeard gobblers were coming out of one of the valleys, 50 yards away. Fred called and the two gobblers came cautiously but they came all the way. Fred shot and hit one and it ran back to the valley.

Fred called Jeff Quinn and told him he had shot a gobbler. Jeff drove came over. They went after the gobbler. Jeff saw it as they entered the brush and trees of the valley. Fred snuck up and put another shot in him and that was it. 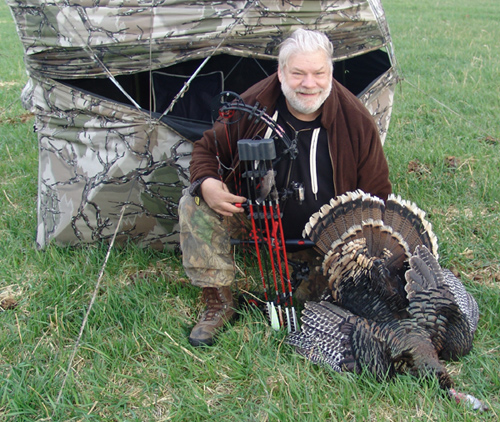 On their hunts Ernie and Savano took both a bow and shotgun. They both had successful gobbler hunts.