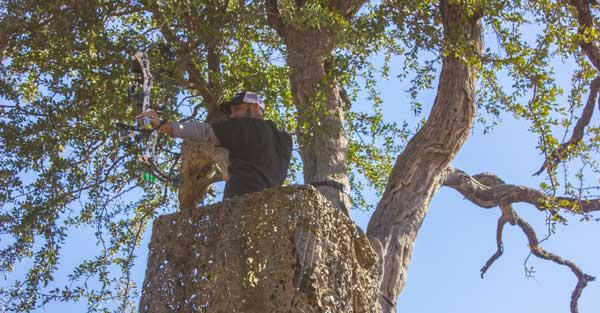 Having hunted Africa for 3 straight years now I have learned quite a bit about African hunting techniques. I have been able to hunt from blinds and vehicles. I also have hunted in a spot and stalk method. All three of these techniques have their advantages and disadvantages. I have found all three to be successful at times and unsuccessful at other times. I have implemented different tactics depending on the animal. For a change up on this most recent safari, Sediba Nkwe Hunting Safaris owner, Vossie Vorster and I have decided to launch a change of Fire From Above.

Journey Hunts teamed up with River’s Edge Treestands before this safari trip began. After much discussion about the trees and set up potential in South Africa, we decided to take a ladder stand and put it to the test. We took one of River’s Edge Standard 2-Man treestands and set it up.

This test was not about harvesting an animal for the initial stages. The test was about getting animal reactions and seeing how the height would affect future hunting. The results were what we wanted and we will now be implementing ladder stands in the future.

Just like North American game animals, Africa’s game can grow used to repeated hunting methods. Currently 90% of the hunting pressure on these plains game animals takes place around water and food sources. The animals recognize pressure around these sources, but often their need of water and food outdrives the sense of protection. Occasionally wind carrying scent and pressure from the same blind on consecutive days gives the animals the sense to stay out of range.

This is one of the places that we are going to implement a tree stand plan. At the water holes that have permanent blinds and have a tree within shooting range, we are going to set up a ladder stand. We decided to go with the Standard 2 Man because you always hunt with a Professional Hunter in South Africa. We also decided on a ladder stand because the trees are very varied in size and type so we have the necessary flexibility of height adjustment and placement that comes from a ladder stand. The addition of a ladder stand at these permanent blind locations will allow us to hunt the same source of water from two different approaches. The animals are currently looking at the blinds as a source of danger and the positioning of the ladder stand will now give the hunter another possibility to approach an animal that is unaware of the impending danger. The change back and forth from blind to stand will allow the hunters to stay more undetected. The flexibility of the ladder stand will also allow us to adjust to the wind when it is wrong for the blind location.

Another strategy that we are testing is the use of River’s Edge Treestands on major game trails. We have placed the Standard 2-Man ladder stand at a location where 4 trails converge. We are going to test hunting away from food sources and water sources. This will be something completely different for Sediba Nkwe Hunting Safaris. All stationary hunting currently takes place over water and food. To try and sabotage the animals outside of this normal approach is going to yield great results.

This past week showed us the truth about the plains game animals of South Africa. An eight year old Kudu that had never been seen before was harvested by one of our clients. It wasn’t seen before that day on a trail cam or by any of the personnel of Sediba. So for 8 years this Kudu has been living in the bush on the Sediba Nkwe property and was never spotted. We believe there are many mature animals on this property that have eluded detection. Being able to hunt major trails away from sources of food and water with ladder tree stands will allow us to see and potentially harvest such animals.

Over the next year the plan is to implement up to 12 tree stands for hunting potential. We will be using the stands as we already explained, but the treestands will also serve as a change for the hunter. The hunter who has sat in a blind for 3 days will love the change of spending a day in the treestand. This new option will also give Sediba many more locations from which they can hunt on their vast property. We will keep you updated in future articles on how the project “Fire From Above” is working.
To shoot your best be sure and go to: Bear Archery Company and for more bowhunting adventures please go to: Bear Bowhunting