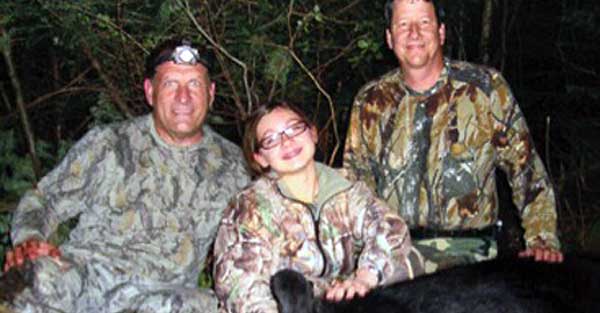 The Pope & Young Club is proud to announce the winner of the 2014 Youth Hunt Giveaway is Falynne of
Wisconsin. She has been a member since May of this year. The drawing was held on September 2 and an excited young P&Y Member received a special phone call from Club headquarters. Falynne was informed that she had just won a guided 5 1/2 day whitetail deer hunt in Illinois with Greg Guerrieri of Mid-West Trophy Outfitters.

“Falynne joined as a P&Y Youth Member in May of 2014,” says Kevin Hisey, Executive Secretary of the
Pope & Young Club. “She’s an excited young bowhunter with experience under her belt. She’s passed hunter education and has already taken a black bear in Wisconsin!”

The Pope & Young Club would like to welcome aboard all the youth members who joined during this Youth Hunt Give-away and look forward to many years of involvement. A thank you goes out to Greg Guerrieri of Mid-West Trophy Outfitters for donating the hunt and to all the members who supported the Club by signing up youth members. Veteran official measurer Stan Zirbel signed up Falynne as a member.

Falynne’s last name and address have purposely been kept private. In today’s social media climate fueling attacks on young female bowhunters, we felt it best to protect her. We hope you all understand.

Established in 1961, the Pope & Young Club is a non-profit North American conservation and bowhunting organization dedicated to the promotion and protection of our bowhunting heritage, hunting ethics and wildlife conservation. The Club also maintains the universally recognized repository for the records and statistics on North American big game animals harvested with a bow and arrow.