by Scott Shultz
in Bowhunting Posts
0 0
A A
1 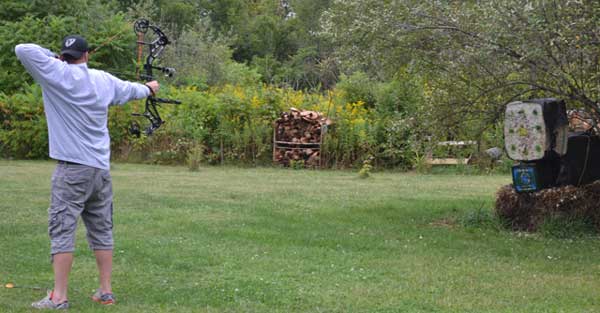 World class archer, globally traveled bowhunter, international man of mystery(?), and all around good guy, Scott Shultz used to be quite the competitive archer in his past life. Now the daily grind of running Robinson Outdoor Products, ScentBlocker, Tree Spider and White Water branded products, plus all of his volunteer and charitable commitments keeps Scott away from most competitive shoots. However, he still knows what he’s talking about when it comes to archery. I recently had the opportunity to chase Scott around Africa and I observed him coaching many archers from all walks of life. The results of Scott’s advice were almost immediate, and will be imprinted on the various archers for the rest of their hunting careers. Scott’s knowledge is too precious not to share, so I asked him to elaborate a bit for our readers as to how the average, untrained hunter could become a better archer. Here’s what he had to say- in his own words.

I recently met an enterprising man that owned several dogs that were highly trained to track and retrieve wounded deer. He explained that just like clockwork, despite his expensive service fee, the day archery season started he was busy tracking poorly shot deer almost every day and night. Some days there were so many calls that he had no chance to attend to them all. He used to joke about a team of very well known Midwest hunters that filmed for TV that had his number on speed dial!

Similarly, years ago there was the famous “wounding study” conducted in Minnesota in which a broad group of archers, pledged to tell the whole truth, were polled about the good, the bad, and the ugly of their respective archery hunting escapades. The study showed that most of the time when an archer released an arrow…. about 65% of the time…it was bad and ugly, and something was missed or wounded.

Next scenario; I’m visiting the local archery range and there’s more than a dozen guys practicing, excitedly getting ready for the upcoming bow season opener. As a former competitive shooter, archery instructor, and a lifelong bowhunter I’m always interested to observe how other archers shoot, including form, consistency and accuracy. The most commonly observed predicament goes something like this: average Joe archer is setup with all the latest and greatest top brand gear – he is all decked out. But, his draw length is considerably too long (a very common ailment that most will never agree with), he aims and “swings” onto the target and violently punches the trigger like he’s swatting a bee, his bow arm collapses, his release arm lunges forward, he jerks his head up to look for the arrow, and he has no hope of any follow through. The result is sticking high in the back of the 3-D target, a mile from the kill zone. Average Joe quips, “well boys, I never could shoot targets very well, that’s because I’m a natural born killer, you just get a deer in front of me, and it’s dead meat every time.”

So, let’s assume we are pledged to tell the truth in this article as well as that wounding study. Let’s discuss what is going on these days with all the poor shooting form, errant shots and missed and wounded deer. This topic and all the contributing factors are complex, the analysis is complex, and the many reasons for shooting poorly are complex. But the cure, if one can simply forget everything complex that has been done wrong for so long, is actually quite simple.

First, more times than not, the bow is not properly fitted to the shooter. The draw length is usually too long, extending the shooter past a position of proper form, compressed strength with room to expand, push, pull and follow through. Or the peep sight is not in proper location on the string requiring the shooter to twist and contort, making weird faces just to see through the peep sight. Or the weight of the bow is too high or too low resulting in form problems and or poor arrow flight. Or, actually in many cases, all the above may apply.

The question begs to be asked, what must be done and how can we fix all of the problems that are so prevalent with so many bowhunters today? I promise you that this issue could be expounded upon for many pages as we look deep into the various problems and the cause for each one and then, how they compound together to rob us from the enjoyment of shooting our bows and bowhunting. But, the answers- and the cure- can be described briefly. The steps to accurate, confident shooting are simple enough to lay out right here.

Let’s start with a bunch of basic foundational reminders that, combined with the proper shooting technique, which we will get to in a minute, will contribute to great form and amazing accuracy.

1.) Let’s be certain our stance is correct as we address our bow and the target. Your feet should be spread even with shoulder width, perpendicular to the target (just like your stance in the batter box facing the pitcher), even weight distribution on both feet, upright and straight that a plumb line from your center neck spine would follow your spine straight down the rear seam of your jeans to the ground directly centered between your feet. Note; you will shoot better with a pair of shoes with heels rather than flip flops or flat bottom sole like sneakers. This is not critical, but it is another fine point you may wish to consider.

2.) Fit of the bow – assume your straight, balanced and aligned stance described in #1 with bow in hand. Hold the bow up (undrawn) and point it at the target. Be aware of your body position as it should be exactly as described above. Note especially the straight alignment of your spine down the center of your pants to ground. Next note the comfortable and natural position of your head and as you look at your bow and toward the target. Now, here’s the important point of all of this; nock an arrow and go to full draw. If any of your body position has changed there is something amiss with your bow set-up, adjustment and fit to your body. Make sense? Typically at full draw the archer must lean back slightly, because the drawn length is too long, so that the alignment down the spine is compromised and bent, and, often the head is cocked one way or another to see through the peepsight.

3) I don’t recommend too much effort attempting to shoot well until all the form and fit issues in #1 and #2 are addressed. You will be amazed how much easier, more comfortable and more accurate you will be able to shoot once these adjustments are made.

For the sake of this instruction, let’s assume any and all adjustments needed have been made. Now we are ready to shoot one arrow. I recommend getting very close to your target butt, say 10 feet. The reason for being so close is to minimize any noticeable “wobbles” while aiming and holding steady on the bullseye. Everyone has a hard time holding the bow perfectly still, so this distance is much more forgiving when we’re working on shooting form. There are a couple additional things you will need to do before we shoot the first arrow: make sure you have a wrist sling loosely fit around your wrist and, your release must be adjusted to a very light, but safe, trigger pull (you’ll appreciate this later).

What we’ve done within the steps above is care for the mechanical and physical aspects of the archer’s form, the equipment, how it’s adjusted, and how it fits. We will not need to do much there again.

In Part 2 we will address the mental part of the shot. Yes, just like golf and many other things, once the equipment is correct, archery is mostly a mental game. You must tell yourself, almost like self-coaching, how to shoot a correct shot, step by step as we will explain. This step-by-step process will be new at first. But then, over time, will weld into your mind and will become your natural support structure for any shot, at any thing, at any distance. This process will work for you, if you will work hard to experience it.