Straight Shot is Back 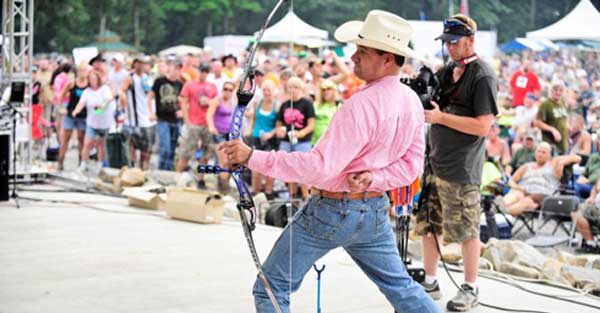 Sound the drum roll. I’m back. I’ve missed you and I hope you missed me. I’ve also missed writing my “Straight Shot” column. I will use this column to catch you up on some of the activities since my last article.

My wife and I had a second baby boy in 2012 named Luke. He recently turned two and is a great addition to our family! I spent all my time between shows with our two sons, it has certainly kept me busy!

Our oldest son Gus turned 8 recently and has been joining me on stage for the past two years. He does several shots and rarely misses. I’m so proud of him. He has a recurve and wooden arrows and is simply a great instinctive shooter. He also makes me pay him $20.00 bucks a show when he travels with me. He has learned early in life that he can earn money with his archery skills. It’s worth every penny!

My father took a 15 point buck with his bow a couple of seasons ago. Mom and pop celebrated their 52nd wedding anniversary in June and her 70th birthday. Ted Nugent called to congratulate her on getting her 19th bear with a bow and called her the “bear whack in’ woman”. We all love Theo. My folks are great.

My exhibition career has been good and 2014 has been a super busy year. In addition to my normal sports show type appearances I also did a number of Cabelas store appearances too. After 29 years on stage I’m thankful the phones still ring! I’ve always said as long as the crowds and media show up and the pay checks flow I’ll be doing what I love!

Some new shots include 81mg tablets, which are 1/3 the size of a baby aspirin. I also do the mustard seed shot in a lot of our church programs and sometimes other appearances. I try and bring 5 spotters from the audience for this one so everyone will know I really hit them and it’s not trick shooting. I have a few other shots in mind for our 2015 tour which I am just starting to work on now.

One more change since my last column ran. This is a biggie. My wife and two sons and I recently bought a new home in South Texas. I grew up in West Virginia and have great memories of my time there. My parents and other family and friends are still there. Actually just four days after moving to Texas I flew back to West Virginia for an appearance at a Cabelas there. I’m sure my travels will bring me back there frequently.

If you have an event, sports show, church event or other activity that could use my message and instinctive exhibition, you can always email me at Aspirinbuster@aol.com.

It’s good to be back and I look forward to Rich Walton and I writing more celebrity interviews in the coming months. Those interviews are historic and I’m proud to share this with Rich and other friends who have made these possible.

When you look at these historic interviews, we have been able to interview many of our sport’s legends that are no longer with us. People like Tom Jennings, Ann Hoyt, Glenn St Charles, Dave Staples, Dick Lattimer, Jim Dougherty and many others. I’m happy that we have their interviews in their own words. The photos are also very interesting. Check them out if you have not seen them.

So that’s the latest for now. You were never far from my thoughts but I help with the boys when off the road so with Luke’s arrival in 2012 I’ve had my hands full. Like Gus he is already showing an interest in archery so we will have another third generation Addington archer coming along real soon!

Until next time friends, Adios and God Bless You.

Social Media Made for the Anti-Hunters