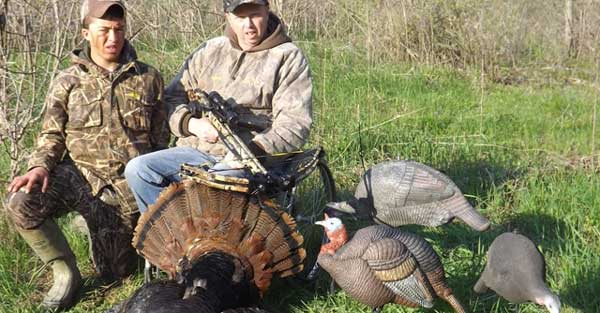 While at a Minnesota Waterfall banquet I shared a table with Michael Kurr owner of OIOI a product developing company. As usual when hunters get together the conversation turns to hunting. I mentioned to Mike that the MN turkey season was coming up and I was getting ready to get out with my bow. This interested him; turkeys with a bow. So Michael asked me if I would like to come to Wisconsin and try for one with him? I thought about this for second and said you bet. Mike said he had places to hunt and a place where we could stay.

Wisconsin has a draw for a turkey tag and it was too late to get in on that but I could apply for a left over tag if there were some available. I went on the Wisconsin DNR web site and applied and there were tags left so they sent one to me. My season went from May 14th to the 20th. The first thing I needed to do was find someone to go with me but most everyone I knew was busy with work or other obligations. To me, if it comes down to work or hunting that’s an easy call but asking someone to take a vacation day just to help me hunt didn’t seem right. Then I hit the jackpot. I mentioned my predicament to my 15 year old grandson Reed and he said he would be happy to help me.

My plan was to hunt Friday, Saturday and Sunday. I got the okay from his parents to miss school on Friday and so we made plans to leave Thursday right after school. It was about a 90 minute drive to Boyceville, Wisconsin and when we got there we met with Mike, made the introductions and unloaded our gear. After everything was put away Mike took us out to where we were going hunt and set up my Primos, Double Bull blind. 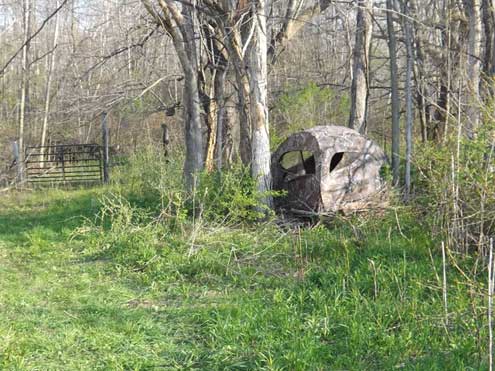 You know the drill, the next morning the alarm went off at three-dark- thirty. This is crazy I thought, ‘are there no turkeys that get up later?’ We dragged ourselves out of bed, into our hunting clothes and headed out before the sun came up so we would be in our blind and set up by first light. Before we left we grabbed some water, lunch and snacks, loaded our gear and headed out. Once there we put our stuff in the blind and I got into my wheelchair. As Reed drove the truck away, Mike helped me get into the blind. As the sun was starting to peek over the eastern horizon Reed came back and we all got settled in for the morning hunt.

We could hear gobbles all around us but they were all a good way off. A hen walked by but that was all we saw for two and a half hours. Then Mike noticed a tom across the road and he was coming toward us. Totally alert and cautious the bird stopped next to the road and gobbled a few times as he checked out our decoys. Amazingly, a car went by him but he didn’t spook. He was100% intent on making a love connection with our decoys. We were anxious to let him.

So, we watched the bird as the bird watched our decoys. It looked like the perfect set up and he looked like, a few times, as if he was coming in but apparently, he detected something not being right. Even with the decoys waiting and Mike calling him in, he wouldn’t budge.

This didn’t work so with nothing else showing we decided to try another spot called the High Acres. We set up the blind as quietly and quickly as we could, got in and started calling. Like before, we heard gobbles at a distance but nothing came in. At 5:00 we moved to yet another spot underneath a tower deer stand. We used brush and camo netting to conceal us as we settled in, overlooking a large hay field. Once again Mike started his calling routine and noticed a hen about three hundred yards away, coming in our direction.

It is always good to have the ladies around and you hope this will bring in Mister Big. Ready and waiting, we watched as she passed by at fifty three yards and just kept going over the hill and out of sight. Hoping for a stop at our location we dejectedly looked back to where we had first seen the hen started and lo and behold saw two toms come out of the woods. They had been checking out the hen and were moving her way. We couldn’t believe our luck as we also watched these birds blow by us at about 130 yards.

Well that about did it for our first day hunting. Saturday was a new day and we tried another spot. We heard gobbling again but all we saw was a hen at 300 yards. Reed and Mike’s young friend, Robbie set up on Robbie’s mother’s farm. Reed was going to be the caller and Robbie the shooter. They had action right away as they were working a tom that was coming in.

As the bird crested the hill and got in the thick brush Robbie made a ten yard shot and downed his first turkey. Taking his first turkey and on his farm was a big thrill for him. We all gathered at the farm and took pictures and measurements and congratulated Robbie on his achievement.

On Sunday morning the plan for me was to hunt the same spot where Robbie got his bird so, again, we got up at 3:30 am. I still think this is nuts but if this is how you do it I am not going to change it. We drove to the farm, I got on a four wheeler and we were off to the blind. This blind was little smaller and it took some maneuvering but the three of us got settled in. Mike started the morning off with some soft hen music and immediately got gobbles from two directions. The two toms were coming closer and Mike just kept working the birds. At 50 yards they hung up but each time he called they would gobble back. These birds were hot but with the thick brush they could not see the decoys. Finally after about an hour and half, one of the toms could not stand it anymore and made his move.

Mike saw him coming in behind the blind. He made a circle around some brush and walked into the opening. Once he saw the decoys he started strutting. I could see him through the brush but I had to wait until he cleared. This gave me a chance to pick up my Ten Point bow and get ready. As he came around the edge of the brush and was clear I launched the two bladed Rage broad head. With the hit he started to run away but you could tell he was not going far. We got out of the blind and went over to pick up my prize. It was a nice two year old bird that weighed 22lbs with a 93/4 inch beard. We took a lot of pictures with the bird and the decoy set.

Mike went and got the four wheeler, we loaded all our gear and drove back to the farm. I wanted to be home early Sunday so this last minute bird worked out well. We threw our gear on my truck, said our goodbyes and headed back to Minnesota.

Wisconsin is a great destination for turkey hunting. There a plenty of birds and good spots to hunt. What was nice was having a Wisconsinite with us who had done all the scouting and had the spots picked out. All I had to do was come and shoot. If I get invited again I will definitely go. So hold on Wisconsin I’m coming back. I want to thank Mike Kurr for getting us up each morning, calling, and putting up with Reed and me. It always nice to have a friend to help me pursue my dream to bow hunt. Without the help I could not do it alone. It is always great when a plan come together and you achieve your goal.

On this hunt we used OIOI’s new cra-z-stake. Motion is the kiss of death to wildlife and the cra-z-stake adds realism to your decoy set. It can be used with any shell decoy, turkey, waterfowl and predators. There are no motors, the slightest breeze sets in an up and down or side to side motion. You simply stick the heavy duty stake in the ground, attach the shell decoy and sit back and watch them come running in. Bring your decoy set-up to life with the cra-z- stake.

For more from Doug please go to: The Disabled Archer