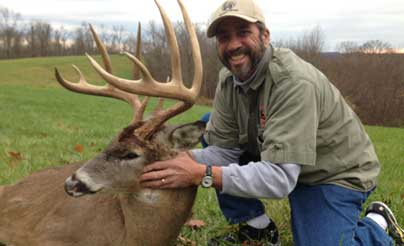 Why Ohio? Unless you have been living under a rock you know that Ohio is whitetailing’s best kept secret. I have been running an invitational writer hunt in Harrison county Ohio for eleven years.  The bow hunting just keeps getting better.

Last year Ohio became the first state to register as many bow kills as firearm kills for deer. Crossbows are legal, the firearm season is short, and it is almost entirely shotgun. The result, lots of older deer. The other factor I attribute to the quality bucks is the fact that this part of Ohio was strip-mined for coal about 80 years ago. When I do a PH test on my soil it comes back between 6.7 and 7.0. That is unheard of across most of America. A perfect PH, means that the minerals are available for uptake into the plants at near 100% efficiency. In plain English, I can scatter clover seed on a bare spot and get a photo worthy clover stand…with no Round-Up, liming or fertilizing.

This rich plant environment combined with amazing genetics and light hunting pressure has created a breeding pond for quality bucks. Every year someone on my hunt sees the biggest buck of their life…on public land.  It happened again this year. Bill Lee saw the hawg on the last Friday.  Bill had already Swhacked a buck and a doe in Pa before arriving.

As we drove into camp this year, a few bowhunters were setting up a buck for pictures. It turned out that the team from Louisiana had read about my public land Ohio hunt and decided to try it out. Two of the bowhunters had seen the research I conducted on Swhacker broadheads. The guy behind the buck, Jarrod Tolar, had been practicing with a variety of broadheads at lunch that day and determined that the Swhackers shot the best. This buck fell to a Swhacker a few hours later.

One of the guys with me is a bowyer and traditional expert, Carey Weaver. Carey brought his traditional hunting bud, Matt.

They are amazing with their handmade longbows. Instead of shooting a lot of pounds they shoot a lot of accuracy. Carey and Matt are fun to watch shoot. Those wood arrows pile up in the ten ring as if it is calling their names. Carey took his buck on the last evening after the weather turned icy.

Although Longbows are more challenging I was relegated to a crossbow this fall because of an arm injury. I had to have someone cock my crossbow before every hunt, then I knew I had to make the one arrow count. I did twice. This buck went 4 yards and my doe 20.

I too Swhacked an 8-point when he walked in front of my blind near the lake. One of the blades sliced his ascending aorta just above his heart and he went 4-yards. It was one of the most humane and fastest takedowns I’ve ever seen. We piled up some does as well.

The guy who introduced me to this region of Ohio has a well managed farm just a few miles off the end of the lake. Tom Sayre’s place is a patchwork of food plots and jungle. He has taken some of the nicest Ohio bucks I have seen on his farm. His friend Jim Bibler arrowed this winner while the rut was in full swing.

We all hunt somewhere. I enjoy Ohio. There are over 9000 acres of public land in Ohio’s Muskingum watershed. http://www.mwcd.org/  Look into Ohio as an option. You can do this yourself.

No matter where you hunt you’ll get more satisfaction out of doing it yourself. My friends Tabb and Jake have hunted Ohio with me before and this year they wondered a bit west but the same rule applies. The more you work to earn a buck the more you’ll appreciate it. Watch this- http://www.bowtube.com/media/1477/Buck_Cruising/