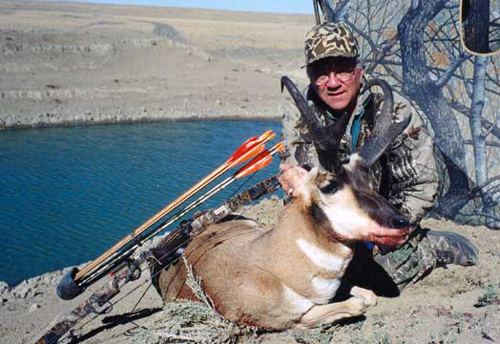 I’ve often told eastern hunters who are thinking of going west to bowhunt, make your first hunt an antelope hunt.  The reason I say that is because such hunts can be done without a guide, they can be done easily on public land, and they are relatively inexpensive. Back in the late 1970’s and early 1980’s I drove west every August and bowhunted, on my own, for antelope in Wyoming.  You had to apply for a permit in the areas I bowhunted, but even if not drawn, there were many wildlife units where you could buy a license over the counter.  That is still true.  Drive west, set up your camp, spend three-four days scouting an area and putting out blinds near water holes, then enjoy an antelope hunt.

Those early antelope hunts were, for the most part, conducted in Unit 95, west of Rock Springs. I had some friends in Rock Springs, and they always helped me find good spots to bowhunt, and sometimes even had blinds set up for me to use when I arrived.  I remember one hunt in particular.  My friend shot an 84 inch Boone and Crockett antelope from the blind before I arrived.  The water was a very small 10-foot-wide hole at the outlet of a pipe that had formerly gone under an old road.  The dirt road was long gone, now barely visible in the desert, but the broken pipe still fed water into a small hole in the sand when it rained, and this small hole was a source of water for a huge area surrounding it.   My friend told me that there was a second even bigger buck coming to that water hole.

When you are hunting big antelope, you do not ever want them to see you around the water hole.  You arrive at your blind before daylight, and you leave after dark.  With this huge buck in the area, this is where I wanted to spend my time.  And spend time I did.  I’d arrive around 6 A. M. and sit there all day in heat that was in the high 90’s.  I’d leave around 7:00 P. M. go to my camp, make a quick meal, pack a lunch for the next day and hit the sleeping bag.  I sat that blind for thirteen straight days.  I don’t know how many books I read, or how many Pope and Young bucks I passed, but there were many.  The buck was there, in the vicinity of the water hole and I saw him feeding in the desert around my blind every day.  Every few days my buddies would drive out to see how I was doing.  On day 6 they noticed that the water hole was drying up, so the next day they showed up with two or three 55 gallon drums in the back of their truck, full of water.  (Hmmm, baiting for antelope?)

Finally on day 8 he came to the water.  Well, almost.  He was 32 yards (estimated because that was before rangefinders.  I did have a stick placed in the ground at 20 and 30 yards, and my guess was that he was 32 yards when I shot.)  He wasn’t at the water hole (18 yards), but the shot was there and I took it.  I have no idea how I missed that shot, but I undershot him by an inch or so and he walked off.  Not really alarmed; just casually walked away.

He didn’t act like he really knew what happened, so I stayed there day after day waiting for another chance at this monster buck.  I estimated him at 90 inches or so.  At that time we are talking world record class buck.  During the night after my 13th day there, it poured.  Now there was water everywhere, making water hole hunting almost impossible for a few days till things dried out again.  Not enough time for me so I just packed up my car and drove home.

During those years I took several Pope and Young bucks in Wyoming.  Maybe five or six.  I also bowhunted New Mexico with my friend Steve Fausel, and took a nice 72 inch buck at a windmill blind.  That was a great hunt with nice people and occurred right about the time that New Mexico was ‘being discovered’ as a pretty good place to take big antelope.

This brings me to the year 2001, and I was looking for a place to bowhunt where I would have a good chance at a Boone and Crockett antelope (one that scores over 80 inches).  The areas in Wyoming that hold such bucks were most difficult to draw, so I was looking elsewhere.  Chuck Adams told me about a guide he used for a huge non-typical mule deer, in southern Alberta.  Now Alberta is not known much for it’s antelope, but they are there and I can prove it.  What follows is the story of that hunt.

It was day three in the Double Bull blind, somewhere on the plains of southern Alberta.  My goal was a big pronghorn, so why was I in Alberta?  Why not Wyoming or eastern Montana, or New Mexico, or anywhere but Alberta?   I’ll explain my choice later, but from what I’d seen the first two days, I was glad to be here.  My guide, Billy Franklin of Silver Sage Outfitters, warned me that I wouldn’t see many antelope.  After all, this was Alberta.  But he also promised that I’d be hunting Boone and Crockett antelope and I was.

Day three started as all the others.  Into the blind at 5:45 A. M., well before daylight, and stay until 9:00 P. M., after dark.  “Dave, if you venture outside the blind and this buck sees you, the game is over” Billy warned.  So, once inside, you were there for the duration.  This ‘captivity’ made for long, tiring days, but this one was about to get worse.  The weather forecast was for very high winds, and by 11:00 A. M. the prediction held true.  My blind got hammered.  It blew so hard that I couldn’t have shot my bow no matter what showed up at the water hole.  But I stayed, hoping the winds would die down, and the buck would water.

My usual day involved a lot of reading, but not today.  Even with the panels all closed, dust filled the blind.  There were times when I thought the blind would get carried away.  It shuddered and shook, but held its position.  I’d later learn that Billy’s other four blinds all blew down that day, but not the Double Bull.  Staying in that blind was a test of my fortitude and commitment to harvesting this huge buck.  At 3:30 P. M. the winds slacked, but it was still very bad and there were gusts up to 30 mph.

Perseverance paid off because at 4:30, the buck and his does showed up.  All the does watered first, then the buck moved to the left end of the pond; a forty-yard shot.  My Parker bow came back, but gusts caused my arm to move around.  I steadied as best I could and touched the release.  As the arrow cleared the blind, a gust of wind caused it to plane and it hit the ground just to the left of the buck.  The wind blew the arrow so much that it didn’t stick; it just rattled sideways into the dry clay.  With all the dust flying and the noise, the big buck never heard a thing.  He just lifted his head from the water and walked away.  He’d been to, or near, that water hole on three straight days.  There would be another chance. 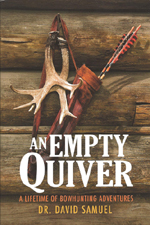 He has won honored lifetime achievement awards from the National Bowhunter Education Foundation, the Wildlife Society, the Quality Deer Management Association, and Whitetails Unlimited. He is in the SCI Bowhunter’s Hall of Fame, and his greatest honor was being inducted into the Archery Hall of Fame in 2007. He has written 9 books, with his three most recent books being Whitetail Advantage, Whitetail Racks, and the one being presented here, An Empty Quiver – A Lifetime of Bowhunting Adventures. You can find the table of contents for the two whitetail books, and get autographed copies of all three of these books on Dr. Dave’s website, www.knowhunting.com.

Play the GoHunting Game & Enter the Sweepstakes Too!