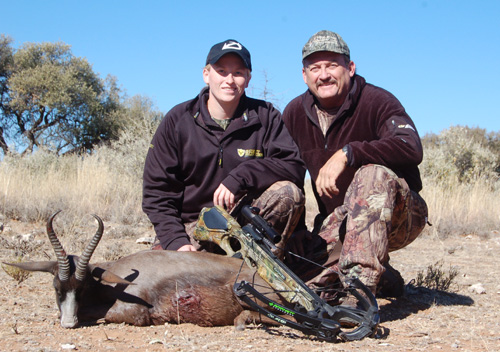 Author with number one, black springbok.

“Hi… I’m Kelsey” and from that point, we hit it off. I met young Kelsey Wantz this past summer while hunting if Africa. Recently graduated from college, her dad Jay treated Kelsey to an African safari as a graduation present. I was very impressed with Kelsey’s motivation and maturity.

Friendly and outgoing, Kelsey was easy to talk to and fun to be around. I did pick on her quite a bit for her “strange” (or what I consider strange) eating habits while in Africa- but she handled it well. In Africa- the “normal” eating pattern was wild game, three times a day buffered with delicious billtong in between meals and as a nightcap. Kelsey didn’t eat as much of the red meat as the rest of us did, so we had perfect fodder for joking with her.

I liked watching Kelsey and her father Jay interact. They have a great relationship and truly enjoyed being together. I am blessed with a daughter of my own and hope we can continue to spend quality time together like the Wantz’s do when she’s an adult. Each day, Kelsey would fill us in at the dinner table about her adventures. We’d laugh and listen, gathering every detail of her hunts. Eventually I started to notice something and by the end of the trip, my hunch had come true. Kelsey was going to make a solid run at a “Springbok Grand Slam” while we were on the Dark Continent, and to our guide Johnny Vivier’s knowledge- she’s would be the first woman to do so with archery equipment!

This story was too good not to share, so I asked Kelsey to jot down some thoughts for me. Here they are- in her own words, Kelsey’s tale of the Springbok Grand Slam.

My love for hunting and the great outdoors started when I was little. I loved going out spotting, tracking and even hunting with my dad. I got my first bow when I was 7 years old and it quickly became my obsession. There’s nothing better than the adrenaline rush you get when the first animal of the day comes walking into sight. But for 18 years basketball was my passion and I played year around. Which meant the first time I would go big game hunting would be this year after graduating college.  Although I no longer get to play the game I love, I’m excited to finally enjoy my passion for the great outdoors.

It was our first full day of hunting at the beautiful Linksfontein Game Lodge, the sun was out but the air was cool. We got settled into our blind a little after 8:00 in the morning and my adrenaline was starting already. Within the first half hour the watering hole was attracting game. We had common springbok, copper springbok, ostrich and wildebeest all making an appearance. With every animal that came into view, I could feel my heart beating faster and faster.

We continued to watch the mixture of game throughout the morning and around 11:00 my PH Peter spotted a black springbok ram approaching from a distance. As the black springbok got closer and we saw the nice horns, I knew it was showtime. I slowly picked up the crossbow, never taking my eyes off the ram and got into position. The second I realized this black springbok was the one I was going after, I immediately became a mixture of nerves and adrenaline. I started replaying everything in my head, where to aim and tips for using a crossbow, like “If you hit them, you pay”. The black springbok then turned broadside to the left of the watering hole and stood 23 yards away. I was trying to keep my breathing quiet while also working on keeping the crossbow steady. I took careful aim with my Barnett crossbow, let out a slow breath and pulled the trigger. At impact the black springbok literally exploded from his position at the water hole and took off.

I thought I would jump out of my skin, my heart raced into my throat and I couldn’t wait to get out of the blind to track and find my first ever big game kill!

After informing the trackers back at the Lodge that we had a black springbok down, we got out of the blind and began tracking him. The hit was a good one but we still had to track him for close to 250 yards, where we found him at the base of a tree. When you first see this beautiful animal it’s not only a sigh of relief that you got him, but being my first big game kill I was filled with all sorts of emotions including incredible happiness and too, a bit of sadness.

Around 3:30 PM we decided to move to another blind just to see if any other animals were hitting a  different watering hole. We got settled into the blind an unlike the first blind, we didn’t see anything for a little over an hour. Then, a little before 5:00 pm a nice copper springbok ram came walking in from our right and I quickly took my spot at the window, crossbow in a hand. Hoping with one kill out of the way the nerves wouldn’t be as bad, but I realized quickly that they were just as bad! The copper springbok presented me the shot I wanted and I slowly squeezed the trigger. This time I failed to aim from the angle I was shooting correctly an I hit him low. After he ran 40 yards he decided to just stop an stand there. With the sun beginning to set PH Peter wanted me to stalk up on him and try and get another bolt into him. Unfortunately as soon as he heard the blind door open he took off and left a rather small blood trail, making it hard to track. The last hour before the sun set completely, 5 of us and the tracking dog Rigby searched for over a mile and had no luck. The next morning we were at it again but this time we were riding in the back of one of the trucks. We began sweeping all the land hoping and praying we would find it, but for me, I was upset and angry. As we continued to ride Flip the driver saw the ram and told Peter to shoot it as it was 75 yards away and running. Thank God Peter made an incredible 70 yard shot to drop my copper springbok ram. I still felt terrible and vowed to be more careful on the next shots.

After successfully finding my copper springbok we set our sights on finding a nice white springbok. We went to a new blind and as we were pulling up to it, we chased off a herd of white springbok. As we were unloading our gear from the truck into the blind, Peter said they would be back in later that day. After getting everything situated we decided to eat lunch quick. While sitting there I saw something move out of the corner of my eye. I couldn’t believe it, the herd of white springbok was already making its way back to the watering hole only 10 minutes after we had chased them away. Needless to say lunch was cut short and a standoff began. The ram made a point to stand and feed in the center of the herd, making it impossible to get a clean shot. Finally after a good 25 minutes the ram was cornered away at 30 yards and gave me an open shot. I took the shot and we watched him take off and drop 100 yards from the blind. Again, it was impossible to contain my excitement. I couldn’t believe how fast everything happened.

It was our last day at Linksfonstein and we were dropped off and settled into the very first blind we had hunted out of and where I got my black springbok. This blind was also where we had a nice common ram come in the first day, which is what we were hoping would come back. Like most of the other days the sun was shining but the air was brisk and the wind wasn’t helping! It was a slow morning and the watering hole was vacant the majority of the day. There were a few gemsbuck that had passed by but none of what we needed to finish off the grand slam! With no action to watch, the hours dragged by, then out of nowhere Peter quickly got my attention an told me to get ready. A big common springbok ram was slowly and hesitantly making its way to the watering hole. Knowing that any second the wind could change direction and give the springbok a better chance at winding us, I knew when the first opportunity presented itself I needed to take it. As soon as he turned broadside, I let it fly and he took off immediately! After about 10 minutes we were on the track and working to follow the blood trail. Walking up on him and seeing him down was a bitter sweet moment. The cool thing about it was I shot my black and white or first and last springbok at the same blind.

Kelsey- from all of us at ScentBlocker- CONGRATULATIONS! Not only on your incredible run at a Springbok Grand Slam, but on the amazing memories you and your dad will share forever. While Kelsey didn’t complete the Grand Slam, she made an incredible run at it and I’m thinking she’ll be returning to Africa for the one she couldn’t take credit for.
Maybe dad will make you get a Master’s Degree to earn that trip.

For more please go to: Nothing Gets You Closer