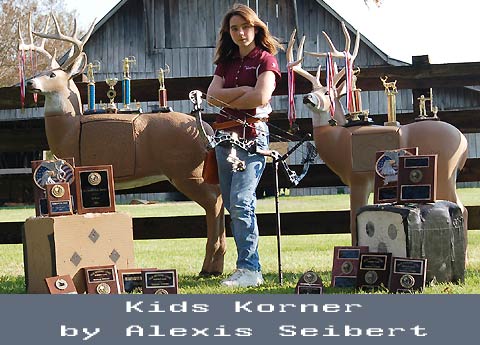 My name is Alexis Seibert. I am a 12 year old girl who loves Archery!

I would like to thank Rich Walton for letting me be a part of Bowhunting.net.
I am absolutely thrilled to be writing articles monthly and I hope everyone likes all of them.

I got into archery at age 4. My Daddy would invite his hunting buddies over to go “sling some arrows” and I watched in awe. Daddy who had always prayed that I wouldn’t be a prissy girly girl noticed my interest and happily went to pick me up my very first bow. It was a small black Brave which I received that Christmas.

It was a very cute bow and was a great start for me because of my age I would only stand 7 or 8 feet from the target shooting with only my fingers only to watch the arrow bounce back off my target.

Although the Brave was a great start for me it barely lasted a year. By the time I reached five years old, the string was much too easy to pull back. The bow wasn’t very accurate either so on my sixth birthday I received my second bow!

It was a Browning. I liked to call it my “brownie”. I remember thinking it was just incredible! I loved it even more when I shot it! It shot so much more awesome than my Brave and the arrows actually stuck to the target! I was now able to step back from the target. Oh my gosh! Ten yards! On my Brave I had a little Flip Style Rest which continuously dropped my arrows which made my Brave even frustrating to shoot when it did fit me. I did complain to my Daddy about it several times while shooting. Now with my Browning I had a new Rest to solve that problem! I was so thankful! The arrow Rest was called a Whisker Biscuit and I could remember the name from the time I got it. Stepping up to a real bow my dad decided to introduced me to a mechanical Release. The great thing is that Cobra made them just my size. The Release allowed me to pull more weight on my bow and it was so much better and comfortable pulling with my wrist rather than my fingers. I like to be very comfortable and relaxed while shooting rather than stiff 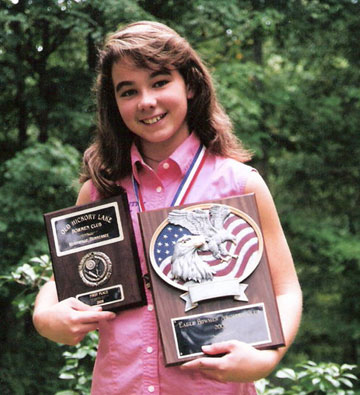 At this time my daddy decided to take me to my very first 3-D course, the Old Hickory Lake Bowmen’s in Nashville, TN. I actually didn’t know what to expect but when we got there it was a very layed back quiet area and was shaded in trees. It was a very nice course and is still my favorite course to shoot today. It wasn’t only the great course they had there but the very nice people there. That day was the day I met Dee Falks and his wife Marsha. They are always nice and I enjoy seeing them when I would visit Old Hickory. I have to say 3-D courses are very good for kids of all ages, with great easy shots, trophies and prizes. That day I became more of an archer than I ever had been.

After this I began taking archery up as a hobby shooting at any bow shoots I could, and winning a few trophies and metals along the way. I now couldn’t even think of dropping archery. It was so much fun! Going to bow shoots or just shooting for fun I’ve realized that there are such nice people in the archery world it is just a very nice place to be. It is probably one of the reasons I have been able to accomplish what I have as a young archer. Aside from getting very accurate with my archery I also quickly began to pick up on the archer’s smack talk.

At age 8 I began getting more serious learning all the basics to archery. I won Shooter of the Year and got a great plaque. At the time I wasn’t too sure what Shooter of the Year actually meant but I was still very happy to get the beautiful plaque. I was meeting some great people and having fun while doing it.

When I was coming to the end of my eighth year I noticed my accuracy had began to drop and I missed more and more targets. I didn’t know exactly what I was doing wrong and couldn’t tell you if I tried. It was a situation where someone asks you

“Well what did you do wrong?”

And you answer “I missed.”

Someone had told me that I’m not practicing enough, to get out there at least an hour a day with my bow but I had never had to work like that before and day by day I was being pushed with practice! Practice!! Practice!!!

At that point I felt like quitting archery, it seemed to no longer be a game but a job as I was pushed more and more. Finally I did. I put my bow down and didn’t pick it up for about six or seven months. 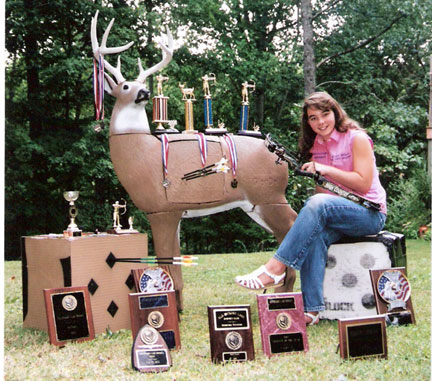 When I turned nine I found myself missing everything about archery. That year me and the rest of my family went to the Southern Sportsman Cassic Deer and Turkey Expo. I have always gone with Daddy to these shows every year. We were attending it when we came across the High Country Booth. They had a bunch of bows lined up many of which were small bows my size. I found a little HCA Pro Hunter, single cam bow and it was beautiful! I liked it even more when I shot it. It had more let-off than my Browning and was easy to hold as I drew back and shot. It was amazingly fast and accurate. I immediately knew this had to be the bow for me!

That day we also found something else. It was a Sight completely eliminating the Peep Sight. It was a Hindsight so I decided to try it. That day I shot a Life Saver candy pinning to a target. I now absolutely loved my new equipment and began shooting 3-D courses again shooting better than ever! I won more and more trophies. My Browning was passed down in great condition to my younger brother Devin and it fit him just as it once fit me two years before.

I was back in the Bull. Now I was even giving my daddy a tough time on bow shoots. I absolutely loved my Pro Hunter. I shot the Southern Classic in Nashville with it. There were plenty of people there and I was shooting pop up targets, something I had never done before. I qualified last on the Saturday and came back for the final on Sunday. They had moved a lot of the targets back to longer distances and at the time I only had a 20 yard pin! I managed to lift my arrows high enough to win it making the best shot I’ve ever made, hitting a buck in the twelve ring just before a doe popped up. 12 spot on a deer at 37 yards with only a 20 yard pin. Luck? Maybe, but I hit it. I also met Spencer Land the owner of High Country and Sandy. Mr. Land offered to sponsor me!

I now shoot a Concept Bow for Concept Archery out of Nebraska. My High Country will be passed down to my brother just as my Browning was passed to him.

I plan to continue my archery for a long time in fact Dee Falks from the ASA is training me now to go to the ASA starting this February. Practice, Practice Practice! But I know that if I want to succeed I have to practice but now I look forward to it. I am having fun again.

Now that you know me better I hope you are looking forward to my further articles on Bowhunting.net and in the Bucks Ducks and more magazines. Until my next article bye, and thanks for reading!

Boo Does 'Hunter's for the Hungry'