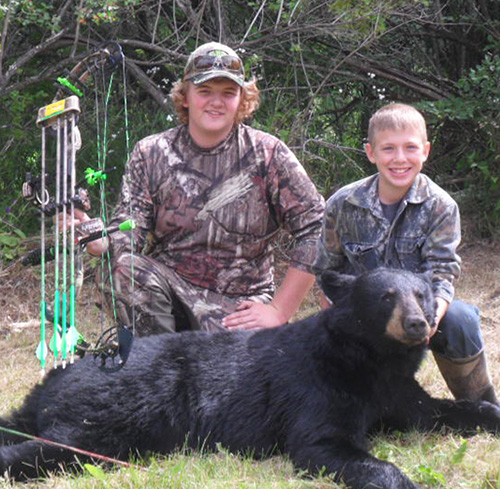 My 2015 black bear season started off on August 6th. The night before we loaded up the truck to leave that next morning. My grandpa Bob, my cousin Jack and I went up a week before the season to run baits and fish. So we started our trip up to bear camp at 2:00 am in the morning . We always stop for breakfast in New Hampton, Iowa. After a good breakfast we hit the road again.

We drove all day to get to Virginia, Minnesota where we spent the night in order to make it a short drive to Ontario and bear camp the next day. We crossed into Canada with ease and drove to bear camp and started our week of running baits and doing a little fishing. We also ran a half dozen trail cameras to see what kind of bears we had this year.

Dad, Aunt Joel and Nick planned to arrive before the Ontario black bear season, that comes in on the 15th. Once they arrived we started placing treestands and ground blinds where we had gotten pictures of some pretty good bears.

The first day we could be in the stand to hunt was August 15. We took two trucks to hunt because Aunt Joel’s bait was in a different area. We dropped off Jack near his stand  then headed off to where dad and I wanted to sit the first afternoon. Not 45 minutes after we got to our stand we had our first bear on the bait.

That afternoon we saw three different bears. One was the bear we were looking for, from the trail camera pictures; but he never came in to get a bite to eat. At the end of the hunt we met Aunt Joel, Grandpa and Nick, who all were hunting in the same blind in an area we call ‘Scooby-Doo’, at Jack’s bait. We all told one other what had happened that afternoon.

On day two, we started the day out by running our baits. All of them were hit and, again, we had a couple of really nice bears on the trail cams. After baiting we came back to camp and had a great breakfast. They we hit the lake to do a little fishing before the afternoon hunt.

I was the only one in our group that still had a tag, so Jack decided to sit with me at the bait where I shot my first bear the year before.

I was ready to roll.

Jack and I got into my treestand and didn’t see anything until the last 30 mins of light — a good bear walked around up on a hill behind the bait logs. At first, I thought it was the big bear that we had seen on camera, but it ended up being a smaller sow. At the hunt’s end we climbed down and ended that day’s hunt.

We were getting a lot of pictures that showed the bear had been hitting the bait in the morning. So as we talked, we decided to hunt for a bit the next morning. I wanted them to drop me off before they ran baits in the morning and pick me up after running them all.

Early the next morning we got in the truck and drove to a different area, which we call ‘Cherry Bomb’. and I got in my treestand just after daylight. Not much happend until 11:00 am when I started to stand up to get out of my stand.

A black spot was in the trees. As I stared, it moved and I instantly knew it was a bear. So I picked up my bow and got ready.

Without waiting around, the bear came right in and walked up to a bacon burn that I had going. Then it started to move the logs that covered the bait. He was facing me, giving me no chance at a shot. He sat down and for 15 minutes he sat there not moving.

After what seemed like forever he got up and gave me a broadside shot. So I drew my bow, put the pin where i wanted it and pulled the trigger. SMACK!! The perfect shot, right where I wanted.

The bear jumped a little, took off, ran about 15 yards and then fell. He did a soft moan and at that point I lost it in the stand. This was my second bear in my two years of hunting black bear.

After I calmed down and got out of my stand Jack and I walked over to where the bear fell and took pictures.

I packed my stuff up and walked out to the road, which wasn’t too far, it’s just a dirt road that was 15 mile from the main dirt road. So I sat out by the road until Dad, grandpa, Aunt Joel, Nick, and Jack came to get me. We all went back to the bait and took a few more pictures. Then we took down the stand and drug the bear out. We then went to camp to show off my second bear.

I’ve been going up to Fred Lutger’s Bear Camp for eight years and plan to go for many more. I’ve only been able to hunt for the last two years because I was under the age of 16, which is an Ontario age requirement.

My family has hunted black bear in Canada since the late 90’s. We’ve been outfitting in Illinois for trophy whitetail and wild turkey since the late 80’s (Wells Creek Outfitters). Fred Lutger has been a family friend for as long as I can remember. This year Fred decided to retire and is letting us take over for him, starting next year we will be taking black bear hunters up to Ontario, Canada, to hunt as well as fish. I am looking forward to the 2016 black bear season and hope to see you up in camp with us.

A Family That Shoots Together….

STOP Biting Bugs & Ticks. It's Easy When You Have This Product...