by Jim Miller
in Bowhunting Posts
0 0
0

I cannot tell you how many times, living here in Texas,  I’ve looked forward to a “Blue Northern” blowing in during December or January.  This is the trigger Whitetails are looking for to throw the Bucks into a full blown rut!  This is when the Whitetail World turns upside down here in South Texas.

It was late evening on November 30th, when my phone rang and David Green from the famed Inflight Outfitters, called and said, “Jim, you really need to get down here to the ranch RIGHT NOW!  With this Northern blowing in, these bucks are going to go nuts in the next 24 hours.”  Well, I was home and my schedule did not allow me to travel for the next three days.  I informed David that I could not be there until the 3rd or 4th of December.  Three days later, I packed up my wife and all of my gear, made a phone call to Wayne Burns my Videographer & Editor in Chief for Tex Mex Outdoors.  I told Wayne to get his butt to Mathis, Texas the rut was on and we needed to be there now.

Inflight Outfitters caters to the hunter and their families, so I knew Nancy would enjoy her time there.  While you’re hunting at Inflight Outfitters you will have a swimming pool, game room, media room with a large screen TV, great quail hunting, one of the greatest wintering places in the world to view hundreds of species of birds. Plus, for  you waterfowl hunters it’s a real paradise after your deer hunt.  And, the area is less than an hour from Corpus Christie, right on the coast with sun and fun along with many ‘turista traps’ that will keep your  family entertained while you  experience some of the greatest whitetail hunting in Texas.

By the time we arrived on the 3rd, the cold front had blown on thru and the temperatures were rising again and you could see the wrath of a full blown rut.  David, decided we should drive around the ranch  and look for some potential areas to set up ground blinds.  David noted, just to rub it in,  “You should have been here three days ago; Bucks, were running everywhere chasing does day and night!” Every tree, bush and fence post was worn slick from rutting bucks making rubs, plus there was a scrape under every bush and tree on the ranch.  It was partly cloudy and we had a new moon which is great deer hunting in South Texas.  Even though the weather was warming up, the bucks were still stoked. 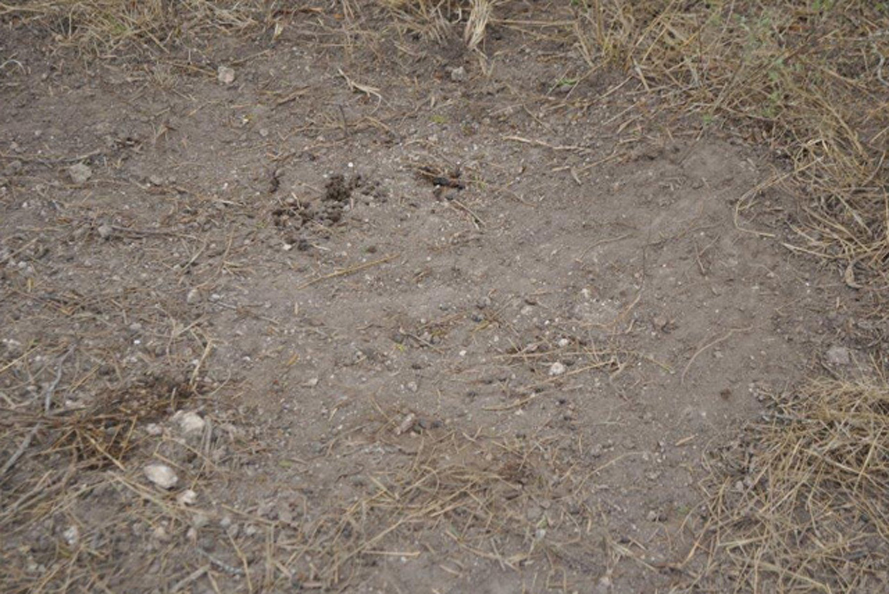 I brought my Primos ‘Scar’ decoy, several ground blinds, a good supply of Timber Valley Fresh Scent 100% Doe in Estrus urine and my rattling horns.  I knew these bucks would still be pumped and would come to rattling.   After spotting a couple of really good looking spots I settled on an open field  that was loaded with Guajillo, pronounced  wa’he ‘ Ah, catclaw and  Huisache, pronounce we- sache  all favorite foods for deer and great cover.  It was also along a dry creek bottom that had an active water trough in a motte of mesquite and blackbrush.  I first set up my ground blind, within 15 yards of a hot scrape where a doe had left her calling card by peeing and defecating in the scrape! 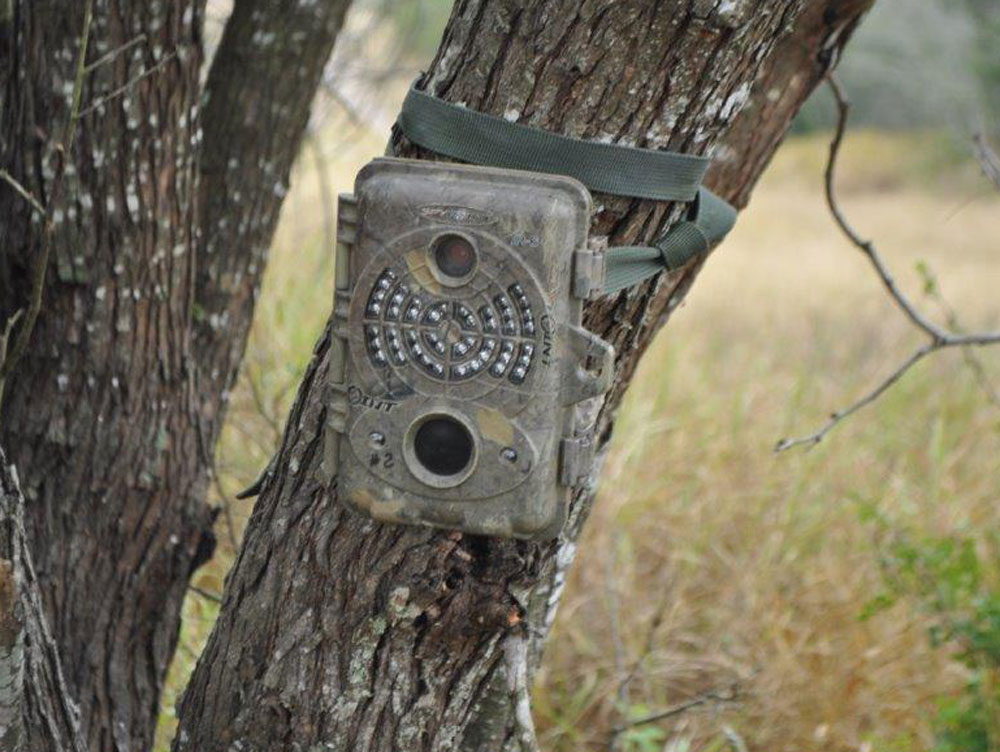 I set up a Wildlife Research Center Mag Dripper loaded with Timber Valley Fresh Doe Urine and let the dripper start doing its job.  Then I placed a Spypoint MA-8 game scout camera to view what was coming into the scrape.  Returning to the lodge, we had a quick lunch then returned to set up our decoy, about 25 yards from our blind. I like to place the decoy facing left to right because, when a hot and mad buck comes in the buck will come in face on or from the rear and will give you an excellent broadside shot. The reason I like the Primos ‘Scar’ is its head moves when the wind blows.

After everything was set we crawled into the blind and sprayed down with Nose Jammer.  Great stuff and its all natural.  After an hour we had several bucks come in from downwind.  I was rattling every ½ hour and by 5:30 pm I had rattled in several bucks including a big 10 pointer with unbelievable G-3’s at least 13 inches long.  This buck came charging in and hung around the decoy for about 10 minutes.  A really great buck, but; not what I was looking for, certainly not on this ranch.

4:00am as we drove out, I was sure I’d seen flying things.  It was heavy fog, very dark, absolutely spooky.    As we walked into our blind, I was using a Green ‘Killer’ light from Elusive Wildlife Tech so I wouldn’t spook any deer. It also helped me to see those nasty tempered  ‘Shaker Tails’ which had been seen lying in the caliche roads just trying to stay warm during the cold nights.  By 7:00am the sun was burning off the fog and we were able to see well enough to start filming.  At 8:10am a big 8 that was all trashed up on his right side came in after the decoy and was all over it with a P/O’d attitude.  This buck hung around for over 15 minutes then took off for the brush as a big 10 came in. Big 10 seemed interested but did not stick around for a shot. He had some other does to go after.  The morning flew by. We had seen four good bucks, all shooters, plus several smaller bucks skulking around the edge of the field.  By noon it had heated up to 65 degrees, so we decided to return to the lodge for lunch and a short nap.

3:00 pm we returned to the blind and I put out another Fuse Scent Wick. This is a neat item that keeps your doe in estrus scent out in the air.  Within 30 minutes of being in the blind I heard a buck snort, wheeze and grunt with a hellu’ve of a rattle in his breathing.  It was a 2 year old buck with a broken ‘Dawg Catcher’ brow tine. This buck was maybe 135 inches total.  He was a scrapper itching for a fight and when he saw the decoy he bristled up, but; when he got to  within 5 yards of the decoy he took off.  I have no idea what spooked him?  The rest of the evening was uneventful, we did not see another buck, a long afternoon.

December 4th returning to the same blind, as it had been productive, we had not really put a lot of pressure on the area.  It was in the high 40’s, overcast with no wind, perfect.  By 6:20 AM,  the sun was just peaking over the horizon.  I looked to my right and watched as this monster buck just drifted in as if he was riding the thermals. Problem was, it was too dark to film.  Wayne and I just looked at each other and shook our heads. Just as quick, the buck was gone.  By 7:00 the wind kicked a little and started moving the decoy’s head.   I started calling by using a doe bleat, then a snort wheeze and finished with a rattling sequence.  Not three minutes later we had a huge 9 pointer to come as  I picked up my bow I watched him tear off out of the area too.  I looked at Wayne, he shook his head and pointed over his shoulder behind us.  There, along an old picket fence stood an incredible typical 14 point buck he was cautiously coming to the horns.  Then he saw the decoy and quickened his pace until he was all over ‘Scar’.   He was moving so much I could not settle my pin on his vitals. Suddenly, the buck took off running, but; luckily for me, stopped and decided to come back to the decoy for one more look?  NOT a good idea.  He came in behind the decoy  stood still staring not 5 yards from the decoy.  This put him 25 yards from me, broadside.  I let another breath  out, slowly squeezing  on my Release, then  that wonderful  ‘THWACK’.   I knew the hit was good as he jumped, hit the ground then blasted off.  I was thinking, “Watch him Drop”. We did, those Grim Reapers hammered the buck, and he died on film not more than 40 yards from the decoy!

This was the icing on the cake, catching the tail end of the first cold spell and  rut of the year  plus taking a great trophy 7 X 7 170 inch Buck.  If you ever want to take a break from the frozen Northlands, enjoy some great weather in December and January?  Think of South Texas, beautiful fall / winter days and cool nights, with huge bucks to hunt, your family can also have a great vacation.  Be sure to contact David Green @ INFLIGHT OUTFITTERS, Phone 361-547-0495 email:  info@flightoutfitters.com

When the Unexpected Happens