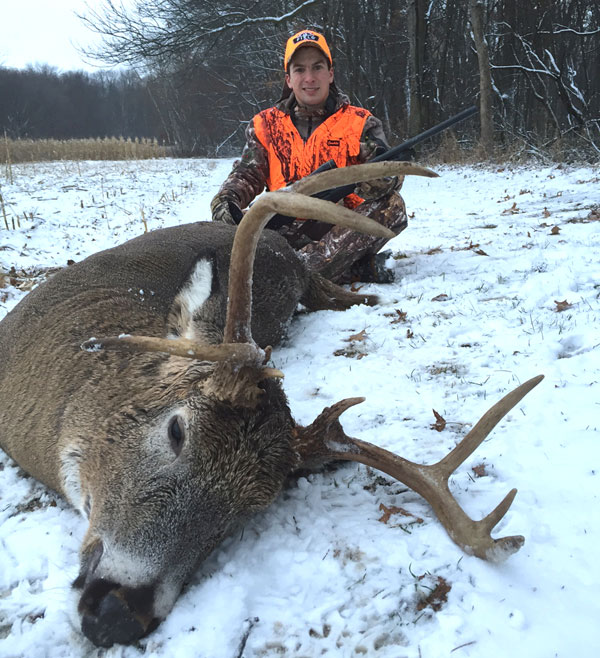 Wyatt Peary, Scott's oldest grandson took advantage of the situation and this nice buck was the result.

I often describe ScentBlocker’s fearless leader Scott Shultz as a “Modern Day Fred Bear”. When I call him that- he humbly smiles and reminds me of how blessed he is. But, the nickname is well deserved. Stepping into his office, or the ScentBlocker warehouse, or in Scott’s home for that matter all remind me of entering a wildlife museum. Beautiful exotic mounts from around the globe line the walls and rest on pedestals, all tastefully done, and perfectly placed. Most of the animals were taken by Scott, with a few from his family, and the majority with archery equipment. Usually when I’m working in the office I need to budget time to talk with Scott, because if I do not have a clear time-frame, I’ll continue to ask him questions about the mounts and nobody will get anything done. Scott remembers the story of every animal and relives each hunt with enthusiasm and passion. With all of his adventures and trophy’s, one would think a guy like that might get bored hunting whitetails, but nope! Scott still loves the rut as much as the next guy.

I hadn’t heard from him in a while and finally caught up to Scott recently. He shot a great buck early in Indiana, and another beauty in Oklahoma. I wanted more details but he didn’t say much. Instead, Scott quickly shifted the attention to his grandchildren and the enthusiasm he had for their hunts this fall. It’s a Shultz family tradition to have everyone over for the long Thanksgiving holiday weekend, while squeezing in as much deer hunting time as possible. Scott’s farm sits along a beautiful wooded valley and he spends much of his spare time preparing the property for the annual Thanksgiving deer hunt with the grand-kids. After seeing a few pictures, I had to know more, so I reached out to the kids.

Wyatt Peary, Scott’s oldest and only grandson is a natural born killer. I’ve had the privilege of sharing an African bowhunting camp with him and we became fast friends. Wyatt is humble and kind, with a huge heart and an infectious smile. I’ve written about him before- but prefer to have him share his adventures in his own words. Here’s the story of Wyatt’s “Captain Hook”.

“I was off school on Thanksgiving break. It was cold and we had snow on the ground. I had gotten out early and had been in the stand about two and a half hours. I was reading a book while waiting for some action to happen. It started snowing again and sure enough, we had several does within the hour. The buck I shot came almost an hour later. He was walking in the field just eating corn, but I couldn’t shoot due to three apple trees blocking any possible shot. After eating corn for a half hour he finally moved to the edge of the corn field and that is where he gave me a shot. My shot was perfect and he fell over like a sawed tree…”

Wyatt also has two sisters who I haven’t had a chance to meet yet. I know if they’re related to Scott and Wyatt, they have to be great kids though. One of the girls, Grace Peary, is also quite a hunter. And… as Scott’s luck would have it- she shot another gigantic buck on his farm. Here’s Grace’s story in her own words.

“On November 27, 2015 my father, Damon and I went to our deer stand in the corn field around 4:00 p.m. We glassed for about thirty minutes, but saw nothing. There was very little wind and after a bit a couple turkeys came down from the woods. A couple cautious does followed five minutes after. About forty minutes after that, on the east side of the hill I saw a 10 point steadily coming down until he disappeared in the corn stalks. After ten minutes, he emerged from the corn. We quietly opened the window of the stand and I got ready to shoot. But then he decided to go behind the corn stalks twenty yards away from us! I waited for him to come into the open because I couldn’t see his body, only his antlers stood out every so often. After ten more minutes, his head shot up, he must have been startled by something? His tail flew up and he ran up the west side of the hill covering thirty yards before stopping. It would have been a good quartering away shot but I couldn’t see him in my  scope. Once I found him and before he went off I zeroed in and pulled the trigger. He bucked and ran up the hill before rolling over dead.”

I know Scott well enough to know that even though two of the biggest bucks on his farm are dead and NOT from his arrows, that he’s all smiles! Even though Scott has had hunting adventures across the globe and taken enough animals to decorate the newest Field & Stream store with his mounts… his real trophy’s are the memories he makes with his family.

So congratulations go to the Shultz and Peary family, I’m happy for you all. I do have one question though? Kids… are the mounts allowed in your house or do they have to stay at Grandpa’s?

Don't Fall From Your Treestand

Tag Out This Turkey Season with Field & Stream Gear & Apparel