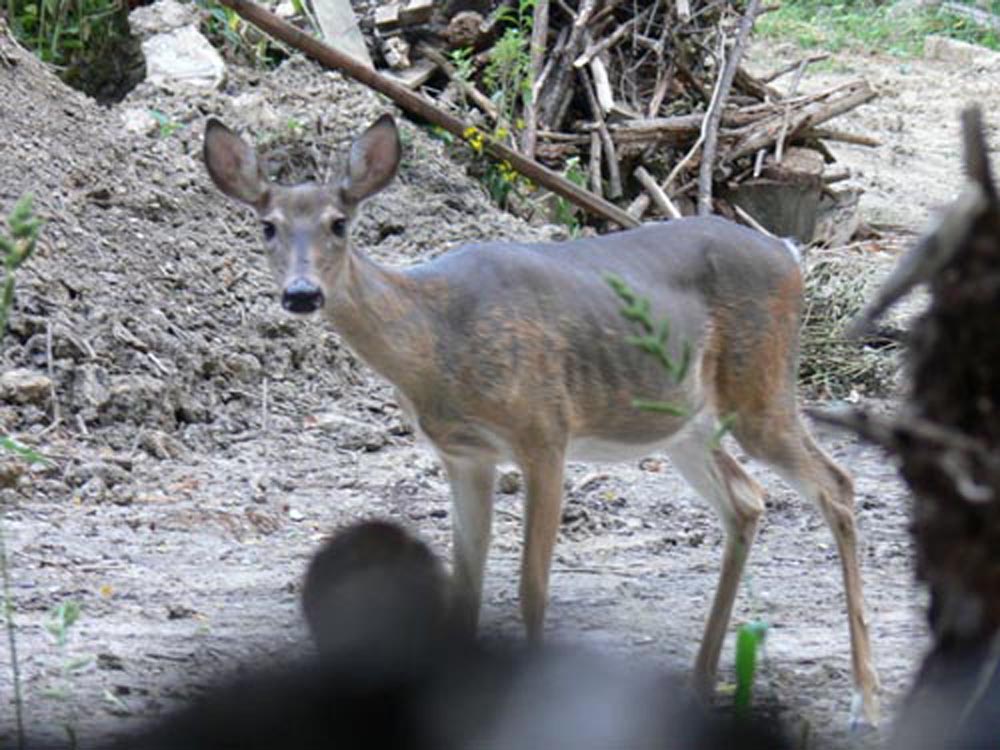 Urban deer can get in pretty bad shape, but trap and transplant is not the alternative.

Six months ago I signed up for a blog via email that is not only very interesting, it’s free.  Every week I now get new deer information that all deer hunters and even some deer-loving non hunters will enjoy.

The Deer-Forest Blog comes from the Ecosystem Science and Management Department at Pennsylvania State University.  More specifically, this blog is written by a deer researcher wildlife faculty member and his graduate students studying deer in Pennsylvania.  The blog contains a diary-like summary of what these graduate students are seeing in the field all year round.  To get it just google “deer-forest blog” and sign up to get twice-a-week updates via your email.  You will enjoy the read.

For example, the January 29th post discusses the movements of radio-collared buck # 8503 before, during, and after a bad winter snow storm.  As a nasty winter storm approached, this buck moved one mile to a southwest facing slope and at 10 AM he bedded down among big hemlock trees.  Over the next 3 days there were 7 inches of new snow and the buck never moved more than 250 yards.  When the storm passed, he moved 4 miles further East then returned, past the hemlock ridge, to his primary area . . . a total of 6.5 miles.  Interesting and fun material.

Their February 2nd post discussed a study to determine if hunters were more likely to harvest bucks that had radio collars attached.  They looked at several sets of data.  In one they found that collars on bucks had no impact on harvest.  In another they found that collars on does had no impact on harvest.  But in the third study they found that younger deer with radio collars were more likely to be harvested.  They concluded by stating, “… are there instances when hunters pass on a collared deer because they’re not sure if it’s legal? Definitely. Do some harvest a collared deer because it’s a new type of trophy? For sure. But overall, we haven’t been able to match self-described hunter intentions with actual hunter behavior in any consistent manner when it comes to harvesting collared deer. That means we have confidence in our estimates of harvest rates on deer in Pennsylvania.”

A lot of hunters utilize public wildlife management areas in Pennsylvania, so researchers looked at harvest rates for deer on those areas.  One would expect harvest rates to be high.  Each year statewide, about 40% of all antlered deer are harvested, and less than 20% of antlerless deer are harvested.  During the 2014 deer season, they had 32 deer with GPS radio collars on state lands.  When the season was over, 31 of those deer were still out there.  From this study, it appears that deer survive pretty well on state lands where hunting pressure is heavy.  Go figure.

The March 27th blog looks at distance deer move from winter to spring.  Turns out that the mean distance moved each day decreases from mid-January thru February, then goes up.  By the end of March deer are moving twice as far as they did 3 weeks prior.

How does rain impact deer movement in October in Pennsylvania?  For does, they found no impact of rain on movements.  Interestingly, they moved as much during the day as they did at night.  Rain or shine, in October, does moved about two-thirds of a mile per day.  Bucks traveled a bit further than does, but when it rained they traveled almost a half mile less.

Maybe the most informative deer blog I’ve seen on this site was just posted  by Dr. Duane Diefenbach, leader of the Pennsylvania Cooperative Fish and Wildlife Research Unit located at Pennsylvania State University, and leader of the deer research discussed on the deer blog.  As you probably know, every time someone proposes an urban bowhunt, those opposed immediately jump up and propose all kinds of non-killing alternatives, none of which work well at all.  One of those alternatives is “trap and transplant.”  Yep, if a town has too many deer, rather than have a bowhunt, we’ll just trap and move the deer.  No harm to the deer, and for sure it is easy to do, and best of all, it works.   NOT.

And Dr. Diefenbach discusses why it doesn’t work.  Here are his excellent points refuting the idea that you just trap and move deer away from an area and solve a deer problem.  Let me add here before proceeding further, Dr. Diefenbach does not take a position on trapping and translocating deer.  He just presents the problems he has learned through years of research in Pennsylvania where he and his graduate students have trapped thousands of deer over 15 years.

First, capture mortality can be as high as 20 percent.  Diefenbach’s group does much better after years of experience, but the bottom line is that “trap and transport” as an alternative to getting deer out of an area kills some deer.  And it does so in several ways.  First, the capture portion does kill some deer.

Once captured, you have to sedate them and move them.  Let’s say you move them only 30 miles.  That process, from the time of sedation to release would take at least an hour, maybe two.

Diefenbach points out that a deer is a ruminant animal with a four-chambered stomach.  If a deer is sedated, lying flat on its side, it has trouble burping so it can bloat in a short period of time and this could cause death.

He also points out that a sedated deer has more difficulty regulating its temperature and it can overheat and die.  There is one more major mortality problem.  The very best time to capture deer is winter, when there is snow on the ground.  In fact, in most research in the northern half of the country, when the researcher needs to capture deer, they do it in winter.  So, you are then going to be releasing those deer at a time when food resources are at the lowest.  And you are dumping those deer in a strange environment where (1) there will be competition with other deer for food, and (2) the deer won’t know where to find food.  Guess what?  That leads to dead deer.

There was a trap and transplant done in my home town around 20 years ago and radio collars were put on those deer (moved around 30 miles) to see how they made out.  All were dead within 6 months.  Some starved, at least one died in a fight with another buck, and some got hit by cars (they are in a strange environment, and they move a lot).

One other problem.  Where do you move such deer?  If your area is like mine, there are deer everywhere.  Dumping extra deer into an area that probably is supporting all it can hold, is not the best idea.  Because of all the above, some state game agencies will not give permits to trap and transplant deer because it is inhumane.  Doing so kills the deer.  Another reason that state wildlife agencies oppose moving deer is because you also move diseases.  Trapping and moving deer with chronic wasting disease (for which there is no test for live deer) is a terrible idea.

Oh yes, in Pennsylvania it costs around $1000 to catch a deer and release it right there.  There is added cost if you move it.  Dr. Diefenbach also points out that moving a deer to a new area exposes it to higher predation because they are in a new area.

Interesting that those opposed to urban bowhunts always come up with alternatives that probably kill deer, when those citizens are opposed to that.  In fact, trap and transplant may be one of the most inhumane alternatives to hunting deer that you could propose.  Yet, such proposals continue.  Apparently science and common sense mean little to those who take short-sighted views of over abundant deer situations. .

Back to the Deer Blog.  Subscribe to the blog and get bi weekly emails that are both fun and informative.  You can’t go wrong.