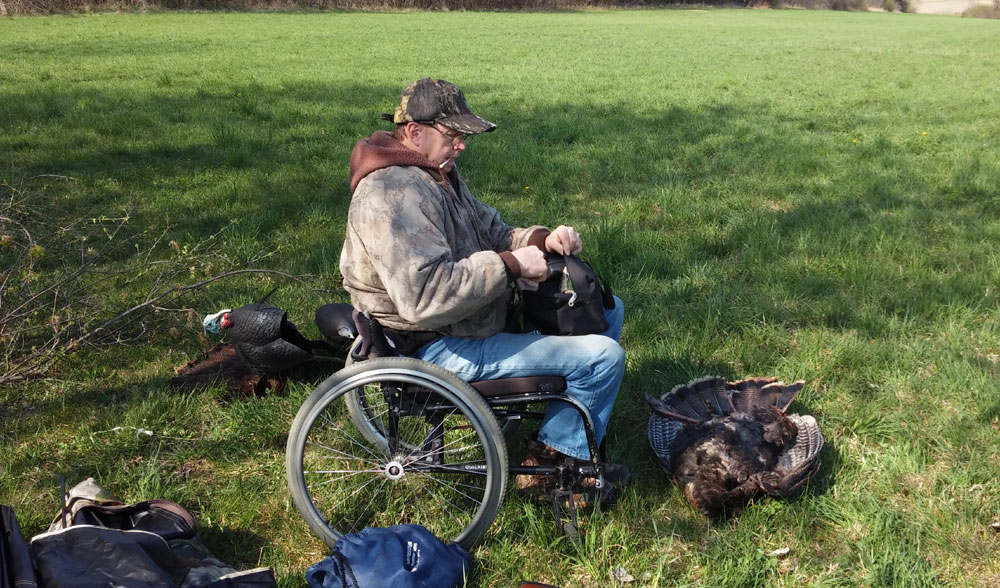 I turkey hunted In Wisconsin last year and had a good time so I thought why not try it again?  So I applied for a permit in area 4, Season C and after the usual waiting period I received a postcard saying I had drawn a tag.  Now I had to get the wheels in motion and come up with a plan.

First thing, I called my good friend Mike Kurr to see what days he had open.  Mike is the owner of OIOI Outdoors and also operates 3G guide service {Gobbler Getter Guide Service}.  We were to arrive at Mike’s house on Thursday late morning and hunt that afternoon.   My time was limited and using a crossbow was going to make things more difficult.  I could only hunt Thursday, Friday, and Saturday morning and I had to be back home for a wedding. So with not much time to hunt I asked Mike if we could get it done, he replied “Get out here I’ll get you a bird“.

Next I had to find someone to assist me.  Last year my grandson Reed went with me so I asked him if he was up for a return trip.  His response “When do we leave”?  I laid out the plan and the day we were to leave it was just a matter of waiting till May 1st.

When the big day came I was all packed and ready to go.  Reed arrived at 10:30 We loaded his gear and were off for the two and half hour drive to Boyceville.  We got to Mike’s house around 1:00 and he was waiting for us.  We loaded our gear and headed off for our afternoon hunting spot.

Wisconsin  seems like a magical turkey hunting area with large open fields, hills and valleys.  We found a good spot in a large hayfield surrounded on three sides by woods where we set up the ground blind and decoys.  It looked like ideal turkey country and were not disappointed.

20 minutes after setting up a hen walked through the decoys.  Usually this is a good sign because where the ladies go the boys are not far behind.  There was gobbling coming from three sides and we could see two toms at a distance but they just would not commit.  There were several toms behind us and we could see them walking in the brush but they would not come out into the open either.  As night started falling the action dropped off and we called it a day.  With all the excitement I couldn’t wait to get back out Friday morning.

We were up at 3.00 and made the short drive to Mike’s house.  This is crazy, up at 3.00 for a turkey. Aren’t there any turkeys that sleep in and get up later?  This is why I like hunting in Africa, you don’t need to get up so dang early. You just need to be in your blind by 9.00.  Plenty of time of time to sleep in, get a good breakfast and still get to the blind in plenty of time to be there and settled in before the game drops by. But then, of course, there are no turkeys in Africa so I guess we have to play by their rules here in Wisconsin.

We were in our blind well before first light and as the eastern horizon started lighting up gobbling broke the morning all around us.  But no matter how much sweet hen music we called they just would come out into the open.  We could see birds all day but nothing came in close enough for a shot.  As the day was coming to an end we reluctantly packed up the decoys and went back to Mike’s house for dinner and a new plan.  Obviously, our current plan was not working as hoped.

I only had about four hours to hunt Saturday morning before I needed to leave so Mike suggested we try a spot closer to his house.  Of course, even though our trip to the blind was closer, we still had to roust out of a nice warm bed at the ridiculous time of three in the morning. Don’t spread this around  because I usually don’t tell people we have to get up at this time in the morning because I am sure they would think I was nuts. I’m still thinking maybe they would be right but here we go.

Mike had gone out Friday night and brushed in a ground blind in a large hay field.  Robbie, the chicken trapper, (He got the name when he was trying to catch predators  at his mom’s farm but all he got was her chickens) was going to be in the blind with me and Reed to film the hunt for Mike’s cable show.  Mike was in a box blind about a 100 yards away, filming from a ‘different’ angle.  Mike is artistic that way.

The morning started out the same, a lot of gobbling coming from the trees behind us, some were very close and then the hens started walking into the field, just like the other days, but no big boys.  Each time we called a gobbler would hammer back and then do a George Jones no show.  You country music fans will know what I mean. God Bless George Jones.

So there we were, about an hour left before I needed to leave and would ya know it, a turkey crawled out from underneath Mike’s stand and headed in my direction. Well what do you know?  I put the binoculars on it and could see it was a Jake.  Finally some real action.  He was coming in fast on the left side determined to beat up my Jake decoy.  I picked up my Ten Point crossbow and got ready to make the shot.  I looked around and saw that Reed and Robbie, my trusty companions were both sound asleep.  What a team. I reached back and woke Robbie. “I don’t mean to interfere with your sleepy time Robbie but we have a hot bird coming in”.  He was bright eyed in seconds, set up the camera and started rolling.  The decoy was 20 yards away so when the Jake got to the decoy I knew it was show time.  I had to lean way forward and turn hard left and just as I shot my wheelchair rolled forward into a hole and my shot went low.  The jake, no fool,  fettered and jumped to the side and looked to see what spooked him.  With a crossbow it’s very difficult to get off a second shot , so I set my bow down a picked up my shotgun.  With the shot Reed jumped out of his chair and yelled “What’s going on”.  I had a fletting thought that when I woke Robbie, I should have also woke up Reed.

Back to the bird. One look out the window and we could see the jake flopping on the ground. Sometimes things don’t go as planned and you have to make adjustments.  As a disabled hunter we are always making adjustments.  I really wanted to take this bird with my Ten Point but turkey usually don’t stick around when the arrows fly so the shotgun was my only option.  Never mind, with the bird on the ground the celebration started.

Mike had been filming from his position and had good footage of the kill to be used for his show, Up Your Odds found on the Hunt It TV network.  Mike came over and we did some cut aways, some hero shots (that would be me) and an interview.  Two years in a row and this year I have to wait till the last hour to bag a bird.  While I did get my bird, I was thinking how crazy it was. I simply have to come up with a better plan.

We loaded up the bird and all our gear and headed out for home and yes I made it back in time for the wedding. Wisconsin is a great turkey hunting destination and I plan on going back next year.  Maybe I will get lucky and get one the first day. Maybe not. After all, this is hunting.

A Family That Shoots Together….