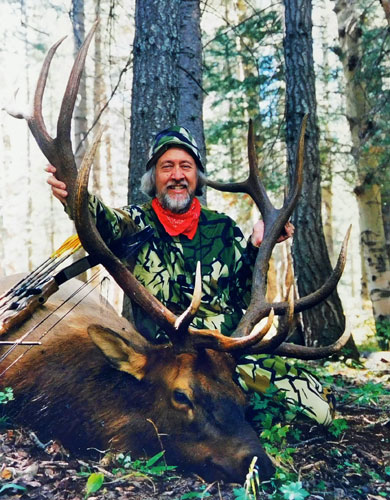 Here are two photos of the same P&Y Colorado bull. The Grip-n-Grin picture is suitable for sharing with others, including publication in one of my books or magazine features. The other is for personal use only. Field pictures showing bloody animals, complete with gaping wounds and arrows protruding from the carcass, are best kept private and unpublished.

OKAY, I CONFESS. I’m something of a troglodyte when compared to most twenty-first century bowhunters. Need proof? Well, I pulled my first toy bow when Roosevelt was president (FDR, not Teddy!). And I was shooting longbows and recurves long before Allen’s first prototype mechanical bow was unveiled in the ‘60s. Fact is, I still love instinctive shooting and sharpening my own heads to a razor’s edge. Lastly, my hunting heroes were and are Fred Bear and Howard Hill, and Editor Roy Hoff of Archery Magazine.  It was Roy, by the way, who bought my first deer hunting success story in 1964 and urged me to write more.

Back when I began bowhunting, only three or four of every 100 bowhunters killed a deer. Mostly because there weren’t that many deer around and lots of us beginners learned bowhunting by trial and error. In’62, I hunted Indiana’s entire archery season and saw only one deer, a doe. But each summer I shot in National Field Archery Association meets and tourneys, biding my time until August when I could hunt Colorado and Utah mule deer and prepare for Midwest whitetails, starting each October. I was fortunate to tag my first whitetail in ’63 and first mule deer in ’65.

I mention these facts to point out I’ve been around archery and bowhunting for most of my lengthy life. So it should come as no surprise that I’m kinda set in my ways and have some long held beliefs that may surprise or even upset some of today’s generation of bowbenders. Furthermore, I don’t really care, because some of the things I witness now piss me off.

Here’s a mere sampling of what I’m talking about:

*Scofflaws and Thieves – Last year I read that a “bowhunter” named Matthew Alwine, who hosted a cable TV show called “Trophy State of Mind,” had been arrested for multiple Montana game law violations, including hunting private property without permission, illegal possession of deer and elk, and other charges. Fines amounted to $11,180, plus a loss of hunting privileges for three years. Most online comments I saw later reflected a belief this outlaw hunter had gotten off with “a slap on the wrist” and deserved far greater punishment.

Ditto for a young punk named Joshua Peterson, labeled a wildlife “thrill-killer” in media accounts. He was finally caught after blowing away at least 40 whitetails in Buffalo County, Wisconsin, during a multi-year poaching spree in an area known for big bucks. Some were left to rot where they fell; others reportedly were found missing antlers and prime cuts of venison. His punishment? A loss of hunting privileges for six years, $3,700 in fines, and 45 days in jail.

Seems to me such brazen cheaters need to be hammered for their illegal actions. Besides being held up to public ridicule and subject to hefty fines, I’d also favor a lifetime loss of hunting rights, coupled with some serious jail time plus multi-year probation. Perhaps such severe punishment would cause others to pause before breaking game laws and bragging about it. Sadly, ego and avarice have been the undoing of former TV “stars” who succumbed to temptation and cheated their way to some degree of fame and the monetary rewards it brings. And I expect it to happen again and again.

A Lack of Respect for Game Animals – I sometimes sign off Facebook feeling the IQs of some so-called bowhunters are lower than the draw weight of their bows. And more than a few of the photos I see posted are downright disgusting. It’s not bad enough that hunters brag about “smoking,” “sticking,” “whacking,” or “thumping” a deer, elk, or whatever, they seemingly take delight in showing photos of blood-splattered game with gaping wounds and lolling tongues.

Broadhead-tipped arrows kill by creating massive hemorrhage to vital organs. Every clear-thinking hunter and non-hunter understands that fact. And while it’s one thing to proudly share success photos with friends, family, and fellow hunters, it’s another to post in-your-face blood-and-gore photos for the entire world to see. Why? Any Internet audience invariably includes hunter-haters looking for examples of “cruelty” to animals and hunter “barbarism.” Why provide ammo for those people clamoring for the end of hunting and the seizure of our weapons? There are far more of them than us.

Even worse, blood and gore turns off many non-hunters who are potential allies in our war against the antis. I’m a hunter and much of what I see posted disgusts me. I can only imagine how the men, women, and kids who don’t hunt feel. Whatever, I bet it ain’t a warm and fuzzy feeling. 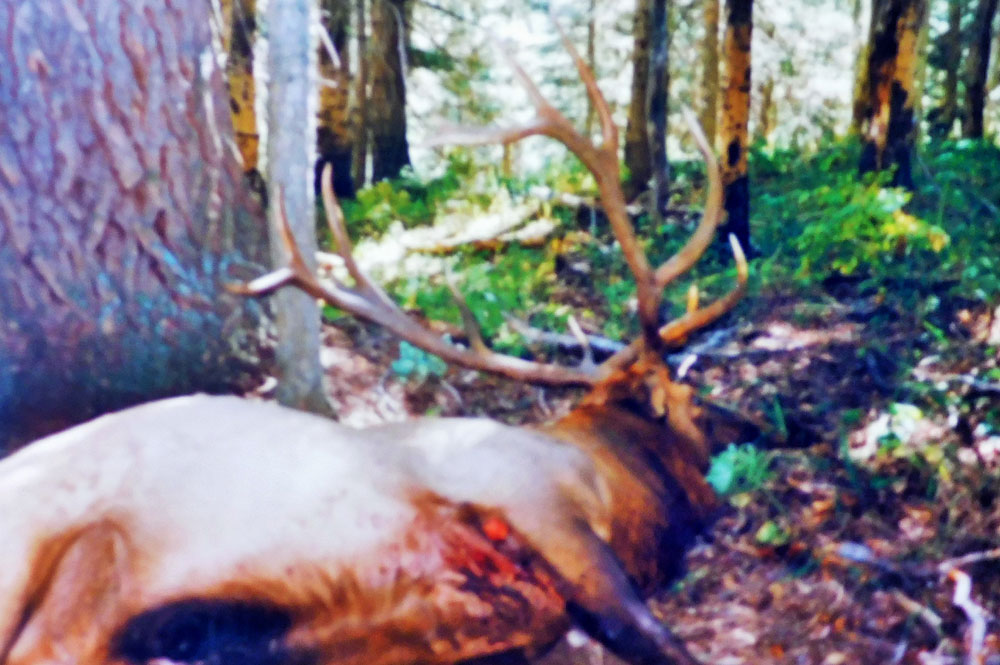 Time was, when I ran Bowhunter Magazine, no published photo could show an excess of blood, a dangling tongue, or an arrow jutting from the animal’s body. Ditto for gut piles and field dressed animals posed hanging from their necks or tossed in the back of some pickup. I firmly believe people who don’t treat dead game with the respect they deserve couldn’t have had much respect for the animals when they were living.

Always take time to clean up and pose the animal thoughtfully. The best field photos never show hunters grinning like ghouls and flashing thumbs-up gang signs over blood-soaked carcasses sprawled where they fell. Believe it! Everyone should take note of my pal Dwight Schuh’s game photos. No blood shows. He’s usually looking at the animal with something akin to reverence and thanksgiving. Sometimes he’s touching his trophy as if in awe of the moment. It’s good stuff that could be shared with anyone, hunter or not.

The great Fred Bear once told me that broadcasting the bloody televised images of a  polar bear he’d arrowed generated such a public outcry that soon the popular weekly “American Sportsman” TV show banned showing arrow impacts and actual kills. While some cable television channels still broadcast graphic kills, I think the best shows are tastefully done, follow a script, and tell a story. The worst examples are shows that are little more than wildlife “snuff films,” replete with grinning egoists joyfully celebrating kill after kill while watching wounded animals die. The difference between good and bad taste in TV shows is as obvious as watching an Academy Award winning and viewing some low budget, hardcore porn flick.

*Unsafe Moments, Mindless Acts – The flower of common sense obviously doesn’t grow in everyone’s garden. I’m now referring to photos and TV or DVD scenes that show bowhunters climbing in or out of treestands without wearing a safety harness or another fall restraint device. A few mental midgets walk or even run around with a hunting arrow nocked while near another hunter or scrambling across wet, snowy, or uneven ground. Or how about taking shots of 90 to 100+ yards — and getting a bad hit.  Then there was one celebrity I know, taking a risky “throat shot” at a buck walking under his stand, then acting like it was an ethical shot. Never was, never will be.

The hard truth is the most consistently lethal bow shot is the tried and true double-lung shot at a broadside, unmoving target. Sure, it’s possible to kill an animal with hits to the head, neck, shoulder, leg, gut, butt, and most anywhere else, providing the brain, spine, or a major bloodline is severed. Regardless, no animal can continue to breathe when its lungs are deflated or filled with gouts of blood.

Most fans of my writing know my feelings about indiscriminate long-range arrow flinging. Distance always magnifies human error and animals can and do move. Although I’ve killed animals with shots taping 60 to 70 yards, I no longer practice at such yardages. For me, the challenge of bowhunting is getting close to wary game (typically 30 yards and under), drawing my bow without detection, and delivering a well-placed killing shot. Shooting game feeding in the next Zip Code holds little interest. Moreover, no matter how much you practice and how good you shoot at longer distances, you’re bound to mess up sooner or later.

Two of the most consistently accurate distance shooters I know – Randy Ulmer and Cameron Hanes – both related stories of bad hits on elk and mule deer. Each detailed the agony of following a wounded bull and buck for hours or even days. And just because they or Chuck Adams or other pro hunter can make shots most of us can’t, doesn’t mean you can or should take such iffy shots. Recently I saw video footage of some guy shooting arrows at a target 200 yards away. How long before some idiot is seen lobbing arrows at a browsing buck or bull standing two football fields away?

YEP, I’M JUST AN UNCOOL, UNIMAGINATIVE GEEZER who’s totally out of touch, having both feet still firmly planted in the Stone Age. Perhaps. But I see myself as just another serious bowhunter who relies on a lifetime’s accumulated knowledge of woodscraft and well-practiced hunting skills to slip within deadly effective shooting range of the magnificent animals I hunt.

The day I no longer gladly accept the up-close challenges that bowhunting offers, the day I find  myself depending more and more on twenty-first century technology and its  growing array of mechanical devices designed to make bowhunting easier, that’ll be the day I’ll hang up my hunting bows forever.

M.R. James is Sponsored by:  The Archery Hall of Fame & PCBA

If you like to read M.R.’s bowhunting adventures you will love his newest book, Hunting the Dream.
Hunting the Dream is available now so be sure and get your copy of this great book

Last Bearhunt: I’m Ready, Are You?

Last Bearhunt: I'm Ready, Are You?

Are You Prepared for the Onslaught?

See Without Being Seen: Light Your Way With The Wild Micro 150 Green LED Flashlight