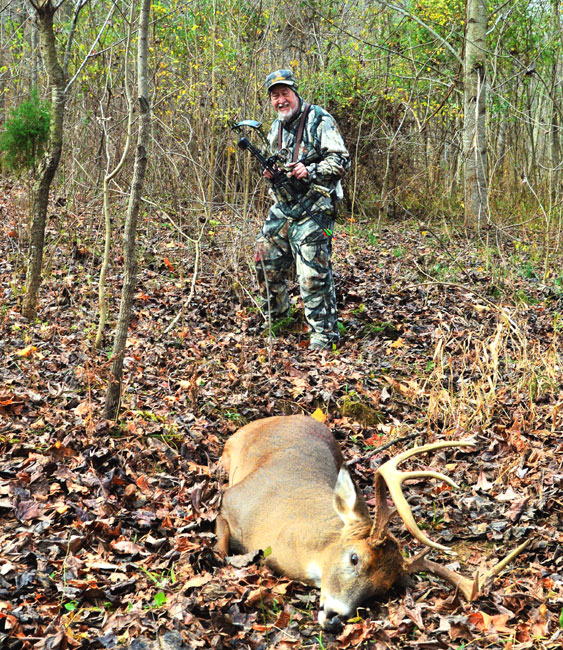 Here’s the record book whitetail I arrowed last November. He was trailing a hot doe along a trail I was standing near. The nice 8-pointer made it less than 50 yards after my arrow hit.

THE REASONS I BOWHUNT are many, highly personal, and probably somewhat complex. But whenever I am forced to come up with the single reason that best explains why I love bowhunting as much as I do, I always point to the one word that says it all for me: challenge.

As a young hunter growing up in southern Illinois, I quickly discovered single barrel shotguns and bolt action rifles. I soon learned the difficulty of consistently rolling a cottontail darting through the briar tangles of an overgrown fencerow ahead of baying beagles; of picking a single bobwhite cock bird out of an explosive covey rise — and then trying for a double before the quail rocketed out of range; of swinging on a drake mallard buzzing the bobbing decoys at 60 feet a second, sweeping the bead well past his bill and tumbling him into a the muddy waters of a flooded cornfield; and of head-shooting a fat fox squirrel with an open sighted .22 as the bushytail rained down hulls from his high perch in a yellow-leafed hickory.

These were all boyhood challenges I gladly met and mastered.

Regrettably, whitetail deer were rarely sighted in my home county back in the 1950s, and I could only dream of someday pursuing the big-antlered bucks like the ones I saw in the pages of Outdoor Life, Field & Stream, and Sports Afield. So I settled for punching holes in paper deer targets at a local archery range, and in due time I mastered the challenges presented by accurately shooting the longbows and recurves of an era before bows came with wheels and cables. And I welcomed and enjoyed the new challenges of getting close to bunnies, bushytails, or hoary groundhogs and sending a feathered shaft speeding their way.

Then In late November of 1963, as a college student enjoying my second full deer season afield (I’d seen a total of only one doe in all of ’62), I stumbled across a rut-silly buck and his lady love. Both saw me but didn’t care as I slipped close enough to draw and release the arrow that launched my big game hunting career.

My life hasn’t been the same since.

NEW CHALLENGES AROSE and were eventually met. From stalking Midwestern whitetails, it was a long drive but short step to bowhunting Rocky Mountain mule deer. And then from mule deer to stock-killing mountain cats and ever-hungry black bears. Then on to speedy pronghorn antelope, bugling elk, and hulking bison. Then majestic mountain sheep and snow-white, black-horned goats living in unforgiving high country terrain that is in itself a challenge to climb and navigate. And then the quest for white-maned nomadic caribou of the northland tundras, hump-shouldered bruins and hulking moose of lakeside wilderness rivers and bogs. Finally, on to the frozen Arctic wastes where muskoxen and great white bears live and survive as they have since prehistoric times.

I give due thanks to God and an understanding wife who have allowed me to visit remote places over the past half century and confront the unique challenges each species holds. I also realize I was blessed to have a job that took me hunting in places I could not have imagined as a gangly Illinois kid shooting guns and arrows way back when. And today my bucket list is mostly met.

So what about yours?

Yeah, I know most hunters will never be blessed to travel and hunt most of the distant places and game animals waiting for men and women seeking new adventures. But that doesn’t mean ample challenges don’t exist everywhere you look.

Take deer, for instance. America’s most popular big game animal is abundant and mostly affordable for just about every hunter. And there’s no limit to the many challenges they offer.

*If you’re consistently successful hunting from treestands and want something new, climb down and hunt from ground level. Try using a blind or stalking and still-hunting.  Getting close enough while remaining undetected, then drawing and releasing a well-aimed arrow, can be a daunting but immensely satisfying experience. Check it out.

*If you’re a deadly accurate 21st century Robin Hood with a cam bow, think about mastering a stickbow and hunting with it next season. This is a relatively simple challenge to accept and it can be both humbling and hugely rewarding. On a related note, if you rely on bow sights and rangefinders, experiment with learning to judge distances and shooting instinctively without bow sights, enjoying the freedom offered to anyone who masters an ancient method that has won wars and accounted for countless successful hunts over the centuries.

*If you’re handy with tools and like do-it-yourself projects, consider crafting a hunting bow of your own. Check out books and DVDs that describe the process. Attend a traditional rendezvous and sit in on seminars that can answer bow-making questions and offer advice. Regardless, build – or at least fletch — arrows of your own preference. That’s one challenge most anyone can meet.

*Can’t afford a sheep hunt costing tens of thousands of dollars? Neither can most people. But that can’t prevent you and a buddy from planning an out-of-state hunt for deer or another species. Accept the challenge of saving up enough cash for a do-it-yourself, guided, or drop-camp bowhunt in new territory.  Hunts are available to fit most any family budget. Just don’t keep putting it off, because such trips are not getting any cheaper.

*If you can, make it a point to introduce some eager youngster or hunting novice to archery and bowhunting. This challenge provides a chance to make a positive change in someone’s life. And believe me, the personal satisfaction you’ll derive promises to be among the most pleasurable you’ll ever know. The average age of American hunters is steadily creeping upward. Consequently, the future of the sport depends on attracting  new hunters eager to accept new challenges.

ON A PERSONAL NOTE, this past November I accepted the challenge of ignoring the treestands on my southern Indiana farm and still-hunting/stalking rutting bucks. I passed up numerous shots at half a dozen or more nice 8 and 10 pointers before seeing a record-class 8-pointer chasing a hot doe. Several times the two deer passed by where I stood watching before I finally got the stationary broadside shot I wanted. And exactly 52 years after tagging my first Pope and Young Hoosier whitetail , I collected a fitting and special trophy using the exact same boots-on-the-ground hunting method.

This fall I’ll be back in my woods carrying a recurve bow. It once belonged to a frequent hunting buddy who passed away much too young. My goal is to pay fitting tribute to a good friend’s memory by using his bow to tag a whitetail. It’s a challenge that I can’t wait to face.

What challenges are you planning to accept in the seasons to come?