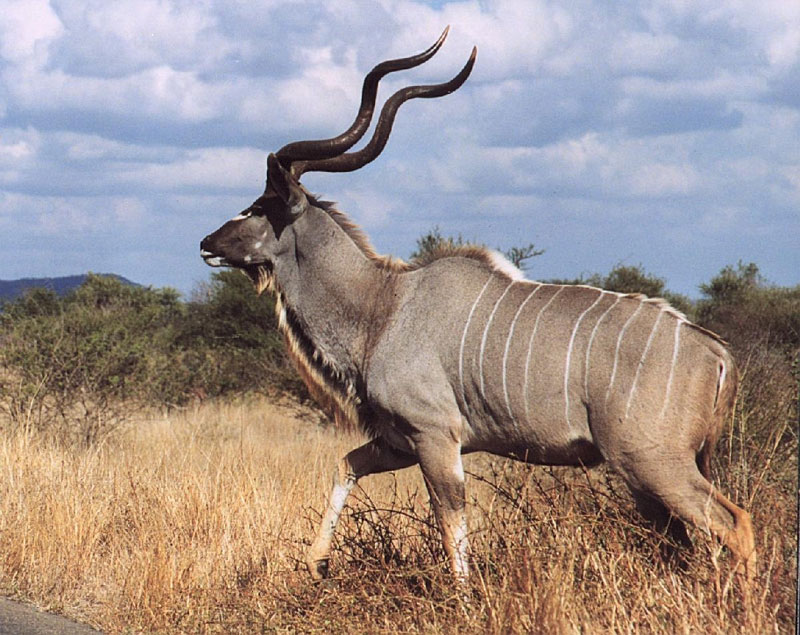 Kudu, one of Africa's most majestic game animals.

When most bowhunters think about Africa, the very first species on top of their wish list is the kudu.  No wonder.  They are about as impressive as any animal I have seen.  Elegant would be a word.  Awesome would be another.  My guess is that many bowhunters take a kudu on their first African safari, but it just didn’t happen for me.  True, on four previous bowhunts to Zimbabwe, I did pass up a fair number of bulls in the mid to high forty-inch range, but I wanted a fifty-plus inch bull, or an old bull with character.  I set those standards, but that 17 hour plane ride home each time, without a kudu, had me questioning my strategy.  I’ve covered some of those previous adventures to Africa in Chapters 5, 6, and 8.  Along the way there were quite a few really good plains game species taken, but a big kudu bull eluded me.

Thus, in 1996 I returned to Zimbabwe for a fifth time.  I went to the Humani Bowhunting camp on the Save River, for one main reason.  Kudu.  Plus I had many friends there and knew that no matter what, I would have a good hunt.  Who knows?  Just maybe my luck would change on this hunt.

The first big kudu bull I ever saw was like all others I would subsequently see . . . elegant, superior, and impressive beyond words, casually striding on those long legs toward the water hole.  I never lifted my bow . . . he was eighty yards away.  He literally floated to the pond, watered, then raked those beautiful spiraled trophy horns in the mud, turned and slowly walked away.  That was in 1991 at Lola Mela Safari camp near Bulawayo in Zimbabwe.  It was something that would repeat itself over and over again.  Huge, beautiful bulls, but no shot opportunities.

Four previous trips to Africa, and no shots at a big kudu.  It got so that it was ridiculous.  Friends who did not want to shoot a kudu would sit in a ground blind and have huge bulls at ten yards for an hour, three days in a row.  I’d then sit there and see nothing.  The other scenario was rain.  It never rains in Zimbabwe in July . . . NEVER.  Two years I went in July and it rained.  This meant no bulls at the water holes, so on each trip I stalked them for fifteen days, with no shots at good bulls.  I felt snake bit.  I was snake bit.  I’d return home, a long seventeen hour plane ride, saying I would never return, enough was enough.  But, after a few weeks recuperating from jet lag and that no-kudu mental fatigue, a nagging urge to return for another try would creep up my spine and into my pea-sized brain.  I’d then began plans to return to Africa to bowhunt for kudu.

I returned to Humani for several reasons.  First, the area was wild Africa, with leopards, wild dogs, elephants, jungle; an area like no other I’d visited in Zimbabwe or in South Africa.  Second, they had more kudu bulls than any place I have ever visited.  Professional hunter, Mush Nichols greeted me upon my arrival and indicated that his son Kim would be my personal guide for my 10-day hunt.  They had built several ground blinds especially for me to take a kudu.  They knew of my previous bad luck and wanted to insure success.

On September 7, a Saturday, I sat the Gore Pond stand in the evening and saw 39 kudu cows, calves and small bulls.  A medium-sized bull came in just at dark.  I passed.  Sunday was very hot and I sat most of the day at Caterpillar Pond.  It was a tree stand, and at 8 A. M. a good bull circled the area and winded me.  I stuck it out all day and at 5:15, thirteen cows and a very big bull came to water.  He winded me at forty yards.  Snake bit.  On Monday as we drove to a morning blind, a female cheetah and four kittens ran across the road.  How neat to see.  Like watching the Discovery Channel.  Just another day in Africa.

I sat the Elephant Stand, high in an acacia tree overlooking a small pothole with water.  Elephant tracks were everywhere and eight wart hogs and eleven elephants came to water.  Great fun, but no kudu.  That evening I sat in “Scoop”, a ground blind.  A six-foot monitor lizard attempted to crawl into my blind, and I shot a nice wart hog . . . but no kudu were seen.

Tuesday the 10th I sat at Gore Pond again and saw one herd of fifty-three kudu.  No one sees herds of fifty-three kudu, but there they were.  One huge bull was in that group, but he winded me at one hundred yards.  He disappeared and came in alone an hour later, at the far end of the pond . . . one hundred yards out of my range.  As always there was plenty to see at the pond.  Duikers, impala by the score, a few eland, a wildebeest, eagles (there are many eagle species in Zimbabwe), and hundreds of bird to observe.  That evening I sat Caterpillar Pond and saw five kudu cows.  Oh yes . . . we saw a leopard cross the trail on our way out.  Exciting.

Wednesday the 11th was my 24th bowhunting day at Humani, over several trips.  I went to a new tree stand and saw forty impala and eighteen kudu.  The animals were here, but when would my luck change?  Thursday we drove twenty miles to a new area to sit a stand they had just constructed.  I’d hung my bow on the bow rack on the way out, as I had all previous days.  But this time the string rubbed on some exposed metal, and it broke just as we arrived for the mornings hunt.  I returned to the camp and worked on tuning a back-up bow.  No problems there so in the evening I again sat at the Elephant Pond.  I saw a small kudu bull and one huge Tawny Eagle.  But my good fortunes continued . . . no kudu.

Would Friday, the 13th, bring me any better luck?  I went to Dr. Dave’s blind, a new ground blind on a pond that was around sixty yards long.  The spot was beautiful and there was lots of game in the area.  A duiker watered out of range, and baboons were around all the time.  A herd of twelve kudu cows and one old bull with beat up horns moved into the area.  Though his horns were not huge, his body was, and this old bruiser had character.  His horns had eight inches of ivory tips. They fed on the acacia pods behind the blind for an hour, then the cows began to move to the water around twenty-five yards from the blind.  The old bull came in, but before he could water, they all got nervous and bolted.  However, they did not leave the area and were soon joined by another very old bull with wide, scraggly horns.  In fact, one horn had about a foot broken off one side.  Still, he was a trophy old bull and had over twenty happy cows in his harem.  They bedded, then also fed on the acacia pods that were everywhere behind my blind.

A big impala ram entered the area and moved to the water to my right.  He watered at thirty yards, and then at the opposite end of the pond the two bulls came in.  It was interesting to see two old gnarly bulls with worn horns traveling together, but here they were.  They faced me watering at thirty yards; as the ivory-tipped bull turned to leave, I made the shot . . . double-lung, and the dust flew as over thirty kudu left the area.  The white-fletched arrow tipped with my old reliable Zwicky, looked good as he ran off.  I waited fifteen minutes then peeked out of the blind.  There were twenty or so vultures in a tree less than 100 yards from my blind, and more coming in all the time.  I walked to where I’d last seen the bull, and there he was, not fifty yards from the water.  The vultures sure found him in a hurry on this oppressively hot day.

A call on the radio brought Kim in a hurry.  Though the body was big, his horns were not.  He was about 50 inches, but his teeth were worn, as were his horns.  Kim estimated his age at over fifteen years, a trophy kudu by most standards.  Friday the 13th . . . finally.

My hunt continued, with a missed shot at a bushbuck and also a big bush pig; two trophy species found in abundance in the wetter areas along the Save River at Humani.  Now that I had my trophy kudu, would I return to Africa again?  Of course, and I did in 1997, going to Melorani Safari camp in South Africa and getting very lucky taking huge waterbuck, nyala, impala and a tremendous gemsbok.  But that is another story (see Chapter 5).

Africa is the greatest place I have ever bowhunted.  The lure of Africa wasn’t the kudu.  It was the sounds, the smells, the animals, the sunsets, the people, the traditions, the things that can eat you.  There is no bowhunting experience like Africa.  The sights and sounds when sitting in a blind along the waters in Africa need to be experienced at least once in a life time.  I’ll go back for all the above reasons, and yes, again for the chance to see and hunt big bull kudu.

And so I do return, several times.  On my 2003 trip to my friend’s safari camp in Namibia, Ombengu, (coming in chapter 8) I took my best kudu, one close to 55 inches.  But my memories of my Humani hunts are tainted by the terrible situation the wonderful citizens of Zimbabwe are having living under the devilish rulership of Robert Mugabe.  Many innocent people are dying, many are starving, and there is no end in sight to his corrupt dictatorship.  He lost an election, ignored the results, and used his military to stay in power.  The country is in despair, with no future in sight.  I have friends who are still going there to bowhunt, and good hunting is still available.  Bowhunting at Humani apparently is no more.  When Mugabe is gone, hopefully the people there can get on with their life, and get that great country back on its feet.  One of my big disappointments is how little America is doing to help the people of Zimbabwe.

for more please go to: The Future of Hunting