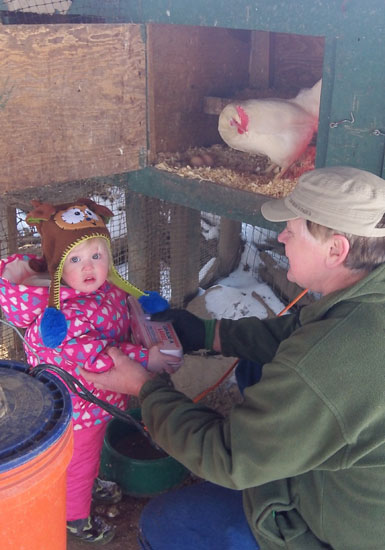 It won't be a free ride as there is a hen guarding the clutch, the infamous guard chicken.

Just when I thought I had it all figured out I took my 1-year old granddaughter, Bella, on her first walk in my whitetail woods. The weather had a break in it and I bundled her up.  We’d recently bought her new green camo rubber boots, which she calls her “Chicken Boots.” Saying she is one is a broad statement as she is actually 21 months and not far from two. Her tiny hand fits perfectly around my thumb, so hand in hand we walked across the pasture to the big woods together.

When we entered the woods, her blue eyes were drawn upward. These were really big trees, especially if you are around 29 inches tall. She paused and was mesmerized with the view. PaPa was eating it up. She looked at me then pointed a big red oak a few yards away. She said, “Bella touch.” I said, “Of course Bell, you can even hug it if you like”.

She stumbled across the forest duff and laid hands on the rough bark. Her tiny hands rubbed the bark, as her exam continued. Then I broke off a piece of bark and handed it to her. After she studied it she said, “Pocket” so I helped her get it into her pocket. Her first treasure from our whitetail woods.

“Treasure”, I thought, “Hey Bell do you know what is under all of these leaves…acorns.” I bent over and started digging around and found two quickly. I told her they were tree seeds.  She examined them and put them into her pocket. Then she began to ruffle the forest floor herself until her pockets were full and running over with acorns. Huh, tiny people see things differently than me who usually steps over those acorns.

Then we moved on to the logging road, hand in hand. Then like so many horses I’ve ridden she stopped and would not follow. I said, “What are you looking at Bell?” She said, “Little one.” Catching on I said, “Do you want to touch a little tree?” “Yes, Papa.” I walked her up to a sapling and her hands reached most of the way around it. She slowly looked up. Then something unexpected happened. She began to shake the tree and it shook all the way to the top. Her eyes were fixed on the top branches and she began to smile.

I asked, “DoeShe recently discovered that monkey vines shake nicely.s Bella like tree-shakin?” She answered, “Yes Papa.” Then it began, we shook about 20 saplings across the next fifteen minutes. I was smiling with her the whole time. Bella caused me to slow down. I was no longer on a mission. This was important stuff. I was drinking it in. On the way back I noticed she was carrying an acorn in her tiny hand. Here I’d been enjoying my whitetail woods but my appreciation was only skin deep. I’d never shook a tree. What was I thinking. 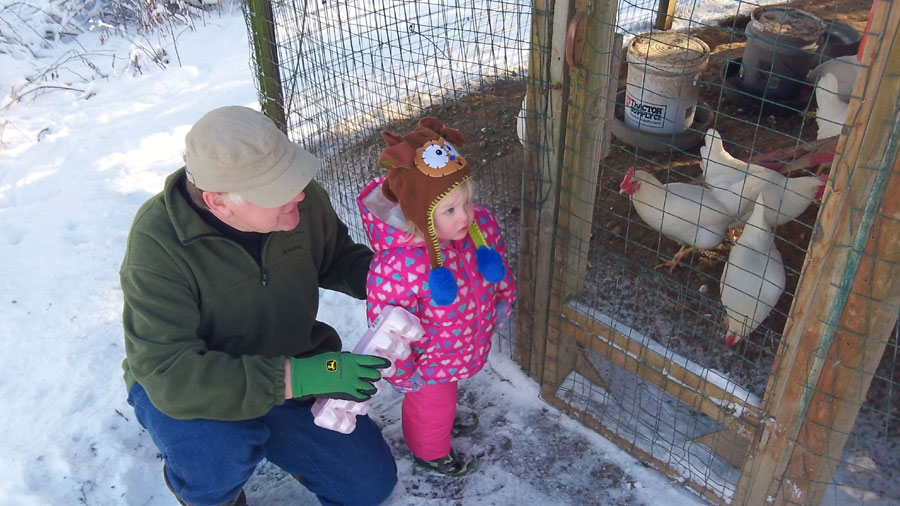 After returning to the house she asked to get the chicken eggs. Actually, she pointed and said, “Chickens, Papa.” This is one of her favorite adventures. Because the chickens are full size and the Bell isn’t, I often just hold her the entire time. But now, with her chicken boots on, she could come in and help from ground level.

She carried the egg carton under her arm. I opened the door only to be met by all eight chickens. My usual plan is to boot them back and keep them in the coop. Bella was all eyes. I grabbed her little hand and led her in. She immediately began kickin’ chickens’. Her kicks were feeble and I’m not sure she actually ever made boot contact but she couldn’t get enough of chasing them around kickin’ at them. Be careful about what you do around kids…they are watching.

Soon I scooped her up and super-manned her into the nest box. She collected the eggs and put them into the crate. A big adventure if you’re 29 inches tall. She comes over often and we even bundle up and gather eggs when the snow flies.

Why a story like this on a bowhunting site? Well, her daddy Cory and I are passionate bowhunters. One day she will hunt the whitetail woods she first shook trees in. Like those great organic eggs we gathered, one day she will help us put deer burger into freezer wrap. Then she will take her first deer. Tree-shakin’ and chicken kickin’ and egg grabin are part of being an outdoors girl. I’m just doing my part…and loving it.

How to Hunt Small Acreages - In Town. Day 1

How to Hunt Small Acreages - In Town. Day 2

5 Things I Learned From Being Sick