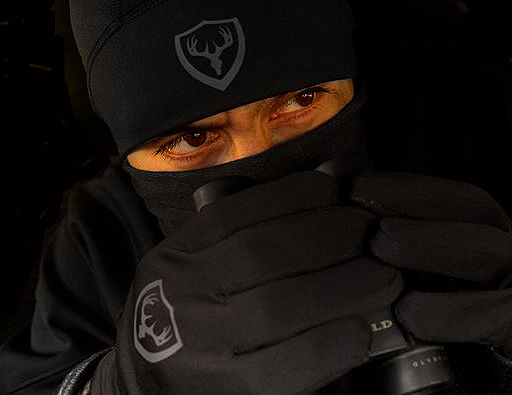 Ever since 2003 when my friend Doug Crabtree and I had our first Grand Slam wild turkey bowhunt together my springtime life has changed and I’ve done one heck of a lot of bowhunting for wild turkey gobblers, Doug Crabtree style.

Since 2003 I’ve heard lots of different turkey callers and, in my opinion, Doug Crabtree is the absolute best caller of wild turkey gobblers, the; Osceola, Eastern, Merriam’s as well as the Rio Grande. If there’s a Longbeard within hearing range Doug will get his attention and the vast majority of the time he will bring him in.

Now, I will never be the caliber of turkey caller that Doug is, but I can hold my own with the ever present portable ground blind that Doug introduced me to that year.

So, lets jump to the present day and talk about what’s on my mind right now. That is, what to wear in a ground blind. It’s pretty simple, really, it boils down to one word, BLACK. And that’s black everything … on you, as well as your bow and what’s on it.

My collection of black clothing, gloves and headwear has gone through many changes as I’ve experimented and learned what will keep me warm in the cold, or be tolerable in the Texas 100-degree heat, or when it rains … as well as what doesn’t shine inside the blind or falls apart or doesn’t fit good or hold up to the hunt.

It takes 4 large totes to hold the stuff that I still use or at least haven’t thrown away after I learned it wasn’t good enough. The stuff I use comes from Wal-Mart, Cabellas, Tractor Supply, Patagonia, REI, and more. And until a few minutes ago I had one nagging question about this conglomeration of black stuff.

“Why isn’t there one place that has what us ground blind bowhunters need?”

This morning I received an email and discovered that, THERE IS. It’s called “Black Out” and Scent Blocker has it.

It has a slogan that says, “Sometimes Black Is Better Than Camo.” Yea, now we’re telling it like it is. The new Black Out apparel lineup comes in flat black ScentBlocker fabrics that are treated with superior Trinity™ Scent Control — a big plus that keeps us ground blind hunters both, hidden from wary eyes, and undetectable by sensitive noses.

The Black Out series consists of a reborn Knock Out cold weather jacket, is complimented with an ultra light-weight Trinity 1.5 Shirt, and completed with the Trinity Cap, Gloves and Versa head mask. I just ordered one of everything in my size and can not wait to use it in the upcoming wild turkey season.

Featuring Trinity scent control, the Skull Cap and the Versa Facemask with S3 silver anti-microbial technology that works together to prevent odor and cover the sights and smells of the human head. The new jet black Gloves conceal movement, your hands are the closest thing to the blind’s shooting window. Also these gloves allows hunters the use of their smartphones WITHOUT having to take the gloves off.