by Clay Newcomb
in Bowhunting Posts
0 0
0 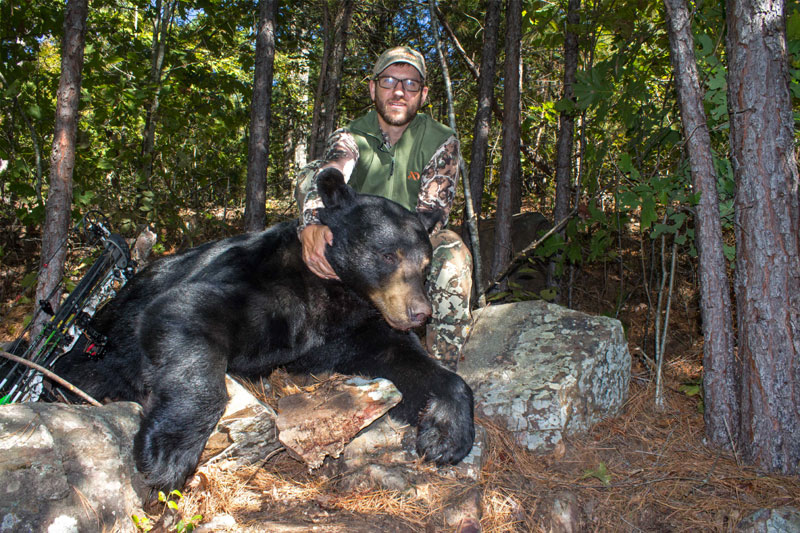 The author with an Oklahoma Boone and Crockett black killed with a well-placed arrow. See the full story in later issue in Bear Hunting Magazine in 2016.

In bowhunting or rifle hunting, shot placement is a critical issue that demands a hunter be knowledgeable about the placement of the vitals on their target animal. Even more important are the hunter’s personal boundaries that give them the green light to shoot. Ethical shot placement and a humane harvest should be the top priority of anyone wielding a weapon with intent to shoot an animal. Most hunters are very familiar with North America’s ungulates, however all animals aren’t made from the same blueprint.  The black bear (ursus americanus) is just such an animal whose body shape, body movements and physical features are different that the cloven-hooved whitetail deer. Lack of understanding of these differences can led to poor shot placement and low recovery percentages.  After all the hard work of baiting, scouting, or traveling to go on a spring hunt, the worst possible scenario is an unrecovered animal after the shot. In 2015, you need to finish the job.

Shot placement is not always a straightforward issue that can be answered in one sentence, especially when dealing with black bear.  There are several issues that make a bear’s vitals more difficult to identify in a hunting situation than a whitetail.  First of all, bears are typically solid black with three to four inches of fur.  The color and hair length combine to make the anatomical features of the bear’s body and bone structure more difficult to identify. Imagine a whitetail deer draped in a bear skin with two inches of fat and a four-inch fur coat.  The fat and hair would increase the appearance size of the deer by six inches in every direction.  The extra area would be a ‘non-vital’ region and skews a hunter’s ability to locate the best possible center point of the vitals. An arrow anywhere close the edge would prove non-fatal.  A hunter must mentally take into account the larger appearance of bear because of its long fur and fat.  With a deer or any shorthaired animal, what you see is what you get.  With a bear things can be deceptive.

In my personal observation, many bears are lost because they are shot too low and too far forward. In deer hunting, a low-and-tight heart shot is encouraged and considered a great shot. Considering a bear’s deceptive hairline, this shot can be tricky. I’ve tracked several bears that bled good for about 200 yards then the blood started to get watery, then eventually dried up while the bear was climbing to the top of mountain. Each time the hunter was confident they had made a good shot, but eventually agreed that it was probably too low. Those bears most likely lived to see another spring, but where all the wiser from their flesh wound.

In an autopsy that we conducted on a bear in Alberta last spring, it was confirmed to me what Rob Nye wrote about last year in Bear Hunting Magazine. He wrote an article called “Middle of the Middle”. Rob is a bear guide in Saskatchewan and tells all his bowhunting clients to aim in the middle of a broadside black bear. In my examination, I found that the lungs extended back to the third-to-last rib. This is beyond the midpoint of the bear. And behind the lungs is the liver, which is also a lethal region if punctured. The ‘middle of the middle’ shot placement philosophy is designed to create an aiming that minimizes risk while increase the chance of an arrow hitting a vital organ. However, some could argue that this might be too far back. My preferred aiming point is about four inches towards the shoulder from the midpoint of the body. In this scenario you’ve got a lot of room for error.

A second factor that plays into bear shot placement, in my opinion, has to do with a bears unique movement style and limberness.  Early on in my bear hunting career, I slipped up on a bear feeding at a bait site early one afternoon and watched it feed at the barrel. It had been some time since I had actually seen a bear up close.  As I watched, I was amazed at how fluid his movements were and was disoriented by the differing potential shot angles. A bear can twist his body like a pretzel and if you shoot at him while he isn’t broadside, you’re taking a chance. A bear is not an animal that most hunters see every day and we are often unaccustomed to their natural body movements and the corresponding shot angles.  A bear has a much more limber body than a deer and there are numerous shots situations that can arise.  For instance, a bear has the ability to sit on its rump with its head up like a dog. Attempting a shot at a siting bear can be tricky and I wouldn’t advise it. A bear also has an uncanny ability to move around a lot, especially while at a bait site.  However, like in most hunting situations patience pays bigger dividends than taking a shot at a compromising angle.

As a rule, don’t shoot a bear unless it is broadside or slightly quartering away. These are the only two angles that you can 100% predict where the vitals are. In my opinion, these are the only two really high percentage shots. Additionally, waiting for the bear to extend his onside leg will expand the kill range by several inches. A bear at a bait site is continually using his front legs to scratch for food. Time your shot for when his leg is extended forward to maximize the kill zone.

Another issue that would typically affect only bait hunters has to do with treestand placement. From my observations, in Arkansas where I run my own baits, I’ve noticed hunters put their stands too close to the bait site for the height they are hunting. A close shot from a highly elevated position can produce a tricky shot angle, especially on a bear. In Canada, most treestands are within 15 yards, but aren’t much more than 10 to 14 feet high. The lower the stand the better the shot angle. Personally, I like being high in a tree just like I would be while deer hunting (above 20 feet).  This obviously helps to conceal human scent and movement. I feel like the best tree stand placement would be no closer than 18 yards from the bait station at this height.  This will minimize the shot angle reducing the risk of hitting only one lung.  Remember to aim in the top third of the bear’s body when shooting from a treestand over fifteen feet high.

The reasons for poor shot placement on a bear can be numerous. Honestly, I don’t think it has to do as much with a bear’s vital anatomy being different. I think the main three reasons for poor shot placement are: 1. People get nervous and rushed around bears. 2. Long hair and extra fat can make for a deceptive body size. 3. A bear can twist, turn, lie down and squat (unlike a deer) giving a hunter multiple of options for low percentage shots. Unfortunately, hunters often take the first shot once the bear has stopped moving.

I once heard a bowhunting veteran say, “To often in bowhunting mistakes are made when the hunter tries to make things happen instead of letting them happen on their own.” Most mistakes in shot placement are made by hasty hunter decisions and can be avoided by an intentional development of patience. Take the time to think about the factors that affect bear shot placement before you bear hunt this spring. Don’t let your big one get away this season!

For more also go to: The Bear Hunter