How to Hunt Small Acreages – In Town. Day 2 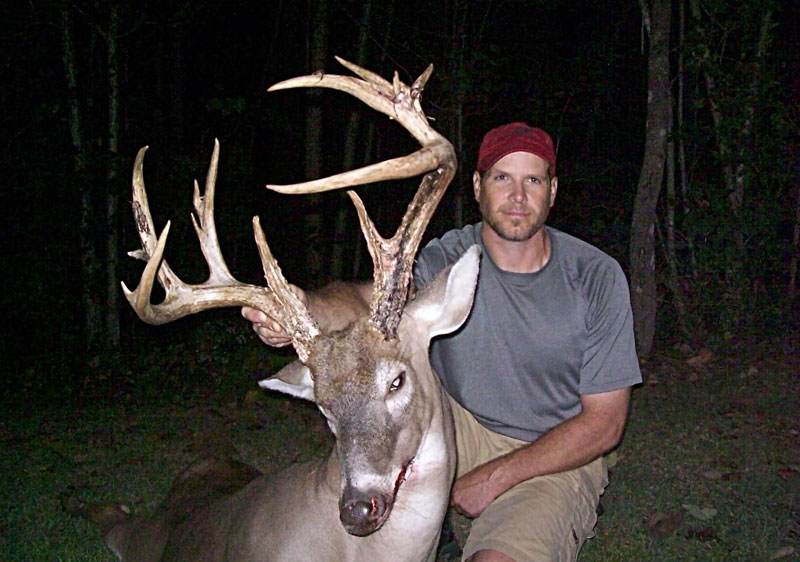 “I didn’t get a daylight picture of Big Nasty, until the week in 2011 when I hunted him,” John Scott explains. “This seems to be a pattern with older-age-class bucks that live on small properties. They move primarily after dark and late at night. I had trail-camera pictures of Big Nasty moving up and down the river bottom from 8: 00 pm until 5: 00 am. When the white oak acorns started to fall in the 11-acre property I was hunting, I got pictures of Big Nasty every night coming in to feed on the acorns. He was traveling with a big 8 point and a big 9 point. When I got the first pictures of Big Nasty, I told my twin brother Jim, ‘You can choose. You can hunt Big Nasty or Twin Towers (see Day 1: “Jim Scott Sees a Big Urban Deer).’ Big Nasty appeared to be the smaller of the two bucks. The pictures Jim had of Twin Towers made his deer appear much bigger than Big Nasty. Jim decided to hunt Twin Towers, and I would hunt Big Nasty.

“About a week before the opening day of bow season in Alabama, I started getting pictures of Big Nasty coming into the acorn flat right at dark and leaving right at daybreak. The acorns were falling more heavily at that time. I decided to put my tree stand on the same tree that I had my trail camera. I was really concerned about the nearby river. I knew when a deer was hit, he’d often run to water. If the river was up, and I couldn’t cross it, I was afraid I would lose him. So, I made the decision that if the river was up, I wouldn’t hunt him.

“I knew I had to have an east wind to hunt Big Nasty. I saw the wind would be wrong on opening day of bow season, because of a west wind, which would carry my scent right to Big Nasty’s bedding area. So, I went to hunt another piece of property. Later when I checked the weather on my cell phone, I saw that late in the afternoon the wind would switch from the west and start blowing from the east. I called Jim and told him I was going to hunt Big Nasty that afternoon when the wind changed. Jim didn’t get to hunt that day because of his son’s birthday party. Jim told me, ‘You won’t have enough time to hunt him.’ But I still climbed in my tree stand after 5: 00 pm, knowing dark would fall about 6: 15 pm.

“Although I spooked four deer as I walked to my tree stand, luckily, they were all does feeding on persimmons. Twenty minutes after I got into my stand, that same group of does returned to feed on the persimmons again. I heard footsteps coming up the hill, and the does scattered. The 9-point that Big Nasty always traveled with showed-up first, and the 8-pointer wasn’t far behind him. When I finally saw Big Nasty coming up the ridge, I got buck fever for one of the first times ever. I knew I had to get myself together, before I could take the shot. I looked up in the sky, thought about what I had to do and finally got my nerves under control. This was the first time I’d seen Big Nasty, except on the trail-camera pictures. He was out of the velvet, and he was huge. I saw all the points coming off his main beams and knew this was Big Nasty that I had 2,000 pictures of now only 50-yards away from me and walking straight to me. When Big Nasty was within 8 yards of my tree stand with his head down feeding, I came to full draw with my PSE bow, forgot about the deer’s huge rack, concentrated on the spot I wanted my arrow to hit and released the arrow.

“Once I shot, all the deer ran away. Big Nasty was breathing heavily and coughing as he ran. I didn’t stay in my stand 1 minute. I came down the tree, walked out of the woods, called Jim and told him, ‘I just got Big Nasty. I’ll need your help in a couple of hours to go look for him.’ Two hours later Jim met me at the property. We walked to the spot where I had taken the shot. We located my arrow immediately and followed a blood trail for about 50 yards. Then, we found Big Nasty. When we saw the deer on the ground, neither one of us could believe the size of this buck. Field dressed, the buck weighed 180 pounds. On the Buckmasters’ Trophy Scoring System that Alabama uses for scoring bucks, the buck scored 153-6/ 8. This scoring system doesn’t consider the inside spread of the main beams. On Pope and Young, he would have scored 171-1/ 8 non-typical. The buck had 9 scorable points on one side of his rack and 7 scorable points on the other. This was the biggest buck I ever had seen or taken.”

5 Things I Learned From Being Sick