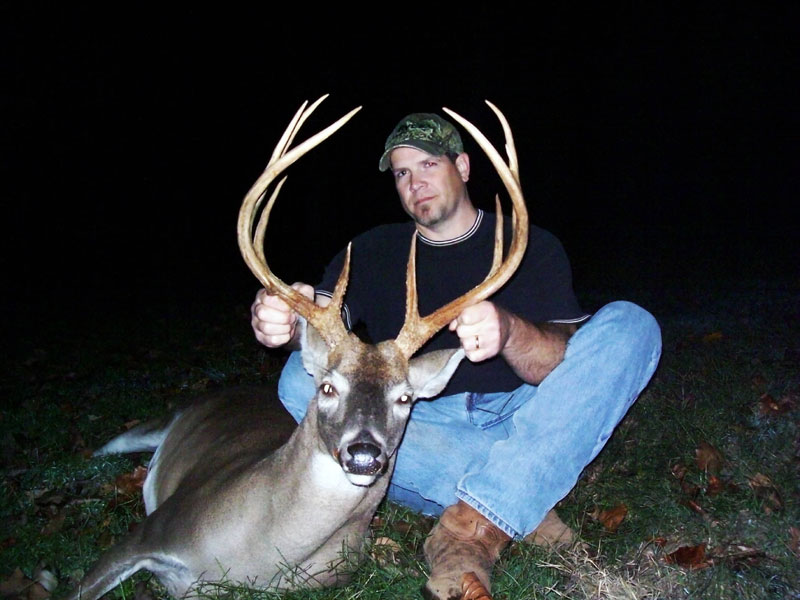 “I arrived at my tree stand about 11: 30 am in almost 80-degree weather. As soon as I got out of the truck, I realized that I was sweating. I knew I had about a 300-yard hike in the hot weather. So, I took off my clothes, sprayed them down with a scent eliminator, walked to my tree stand in my underwear and boots and carried my hunting clothes in a plastic bag. When I arrived at the tree stand, I sprayed myself and sprayed my Mossy Oak camouflage, climbed the tree and pulled up my bow.

“The trail-camera pictures always showed the deer coming from the bedding area up the little creek bottom and going to the persimmon tree. But on this Sunday afternoon late, I heard footsteps behind me. I looked over my shoulder and spotted Twin Towers coming from a different direction than usual. The wind was blowing toward the big buck. I thought I was busted, but Twin Towers circled me and headed toward the persimmon tree. Just as I got my bow in my hand, he threw up his head and looked straight at me, while quartering and turning slightly away from me. Then he put his head back down, and I came to full draw. Twin Towers snapped his head up, just as I released the arrow. To be honest, I didn’t know if I’d hit him or not. I didn’t hear that whomp – the sound that an arrow makes when it hits the deer. He just bolted and ran toward the bedding area. I didn’t hear Twin Towers crash either. I was as nervous as I could be. I texted John and said, ‘I think I got him.’ John texted back, ‘What do you mean, you think you got him?’ I texted John back, ‘I shot at him.’ I went to the spot where I’d shot the buck but couldn’t find my arrow. Finally I felt something touching my leg. I turned around. The arrow was touching me, and the shaft had a lot of stomach content on it. As I thought about the shot angle, I realized that the arrow should have hit on the front shoulder and traveled back through the gut. Then, I felt like I had made a pretty-good shot.

“John was at a restaurant eating dinner with his wife, while we were texting back and forth. When I told John I thought I had made a good shot, he asked, ‘Are you ready for me to come and help you get the deer?’ I texted him back and told him, ‘No, finish eating dinner with your wife. I’m going home and let the deer stay still for 3 or 4 hours.’ I went home, changed clothes and later called John and asked him if he’d finished eating. He said, ‘Let’s go. I’ll meet you at the property.’ We both got to the property about 8: 00 pm. John had a good flashlight, but I had a poor light. We looked and looked and couldn’t find any blood. We got on a dim logging road and starting walking down that old road toward the bedding area. John finally decided he would walk below the road along the creek bank. In the beam of John’s light, I thought I saw something. Then I heard John say, ‘Jim, come on, I have him.’ I ran to John. The buck only had gone about 150 yards. The arrow had passed from the front left shoulder and out the bottom of the rib cage behind the front right shoulder. So, I had made a pretty good shot. I had taken out both lungs. When I got my hands on the deer’s antlers and looked at him, I said to myself, ‘Why is this deer not bigger than John’s?’ Twin Towers scored 147-3/ 8, including the inside spread of the main beams. The official Buckmasters’ Trophy Scoring System rated him at 131-7/ 8. But I wasn’t let down.

“John and I have been hunting for a long time. These two monster deer caused us both to change our hunting tactics. We used to hunt in Missouri and all over the country. We’d get in a tree stand and wait for a big deer to come by. But because of Twin Towers and Big Nasty, we realized that to take quality bucks, we had to find them before we took them. Now, I rarely hunt deer more than several times per year. I won’t get in a tree stand, until I know that I’m hunting a quality buck. I will have some history on him, and I’ll know that I’m in the best place to take a shot at that buck. I like to hunt small acreages. Ever since I took Twin Towers, this system has consistently paid off in bigger bucks for both me and John.”

Be sure to look for our next installment of “Learning How to Hunt Small Acreages When Buck Deer Come to Town with Bowhunters Jim and John Scott” – “Deer Hunts on Small Acreages” taken from John E. Phillips’ book, “How to Hunt and Take Big Buck Deer on Small Properties.” Click here http://amzn.to/1DwjO0H for (Kindle) eBook and print book (CreateSpace) information.

In Sights Bear Trap - Brings the Bears to You