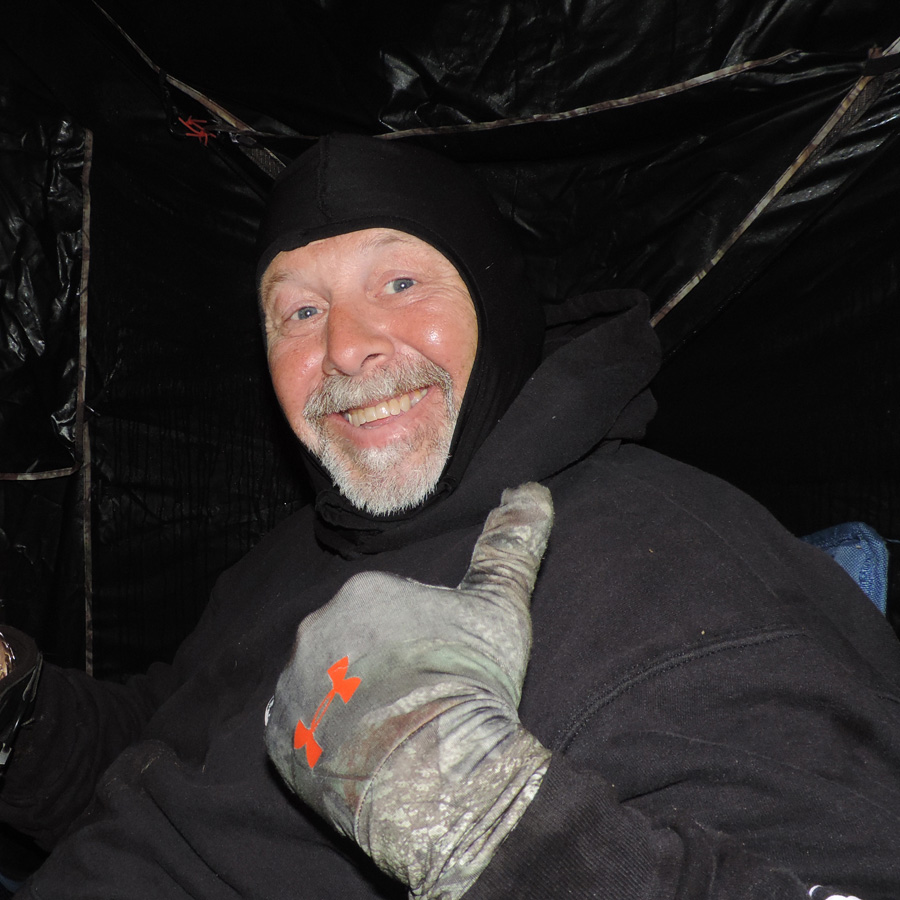 Chef Klaus and the Duck spent two more days in the bear woods. They saw a few bears but didn’t get a shot opportunity. On the 5th day of the hunt that would change. Fast!

After 4 hours of non-bear-seeing-time a bear silently walked around the left side of the blind, it was very close and turned half way around and looked into the woods, seemingly oblivious to the blind about a yard away. Donald Duck had the camera in his hands and took the bear’s picture. 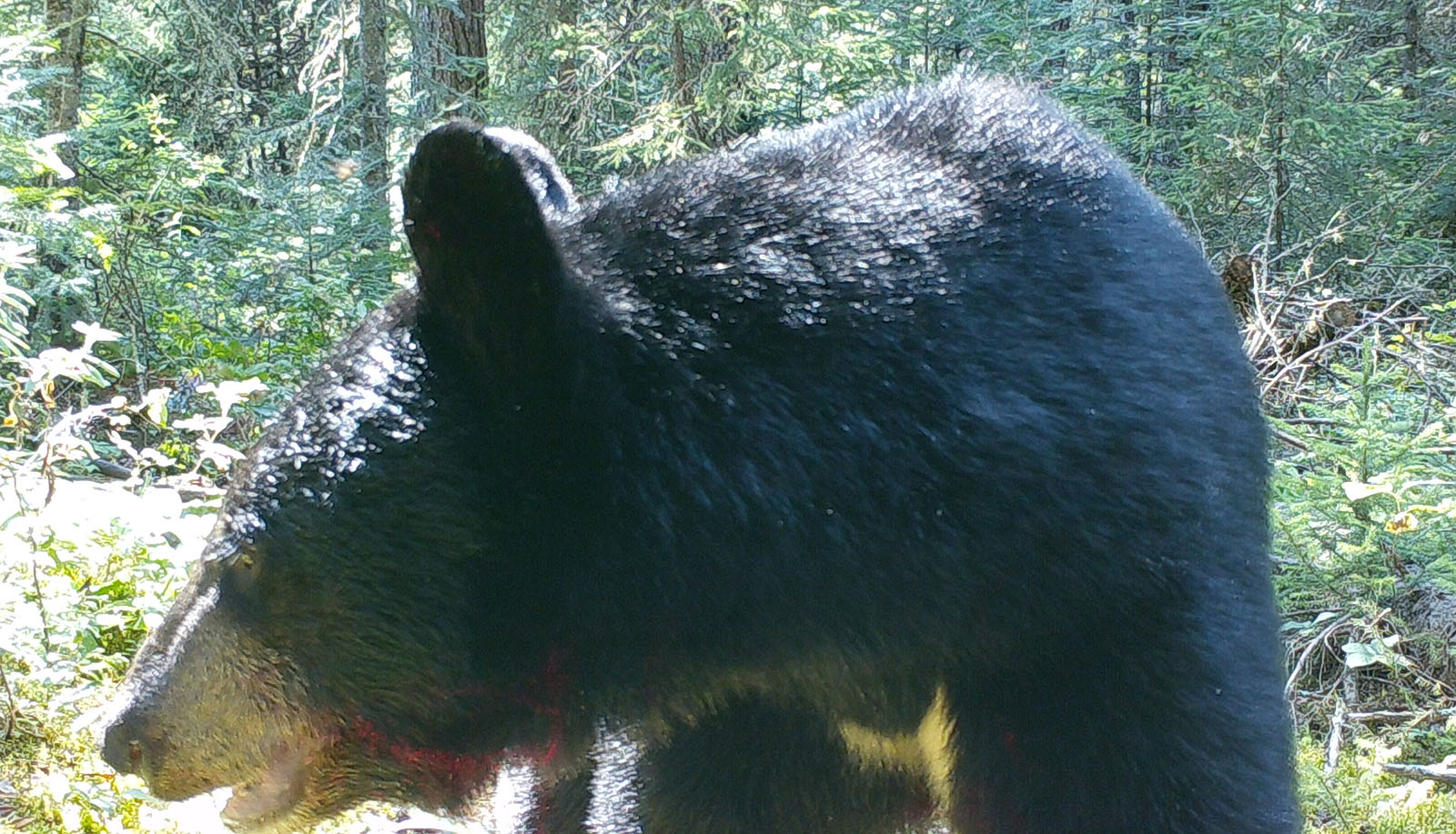 Chef Klaus recognized this bear by the white patch above its legs. Chef froze in place, waiting to see what the bear would do. It turned toward the logs and casually moved toward them. But in a few steps he turned to right and walked into the trees and out of the hunters view. 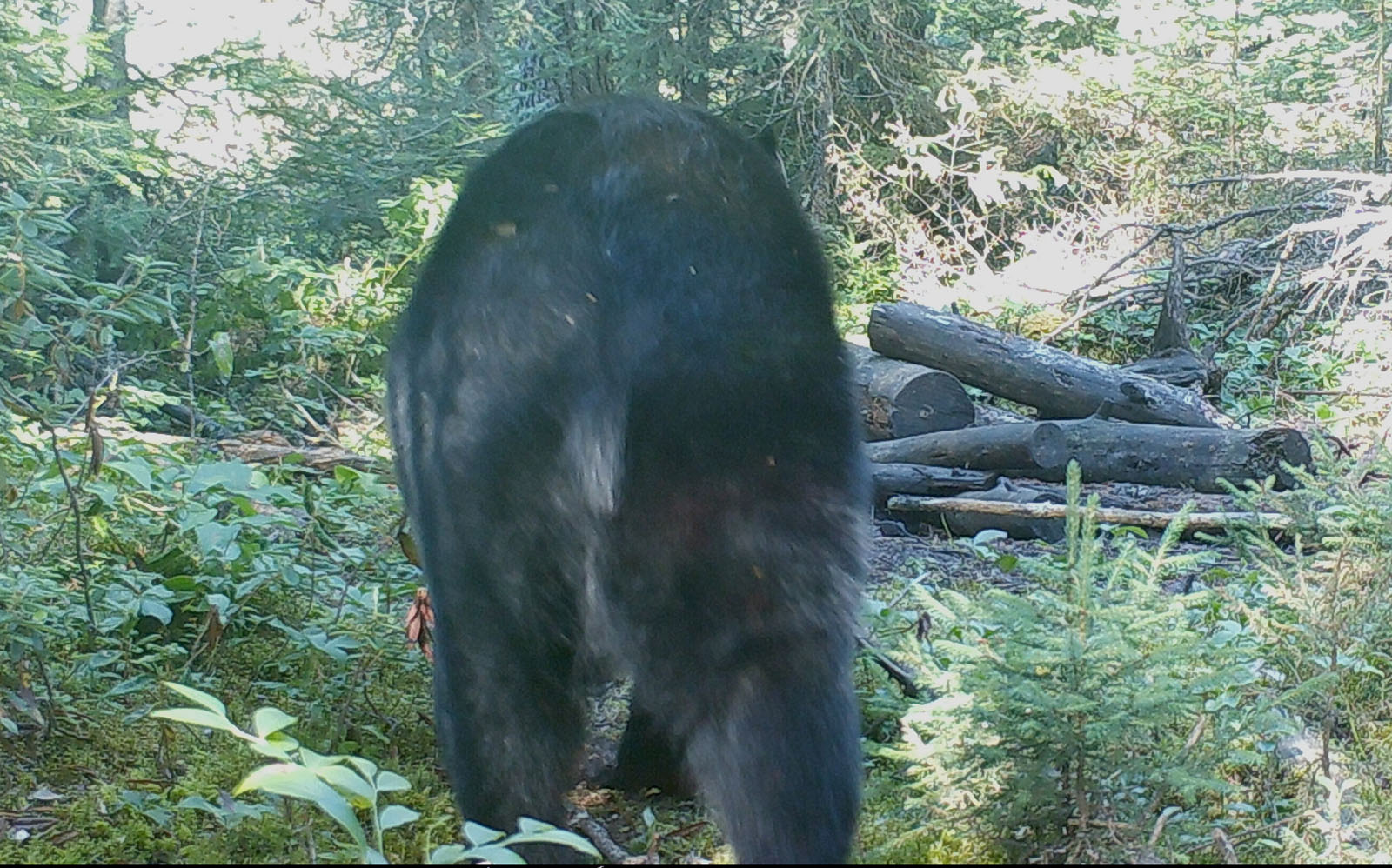 Minutes crawled by slowly. Chef Klaus got his bow in hand and clipped his release on the bowstring. Donald Duck turned on the video camera. Ten minutes later they heard a soft crack and the bear came silently into view to the right of the logs. He stood still for what seemed to be an eternity. 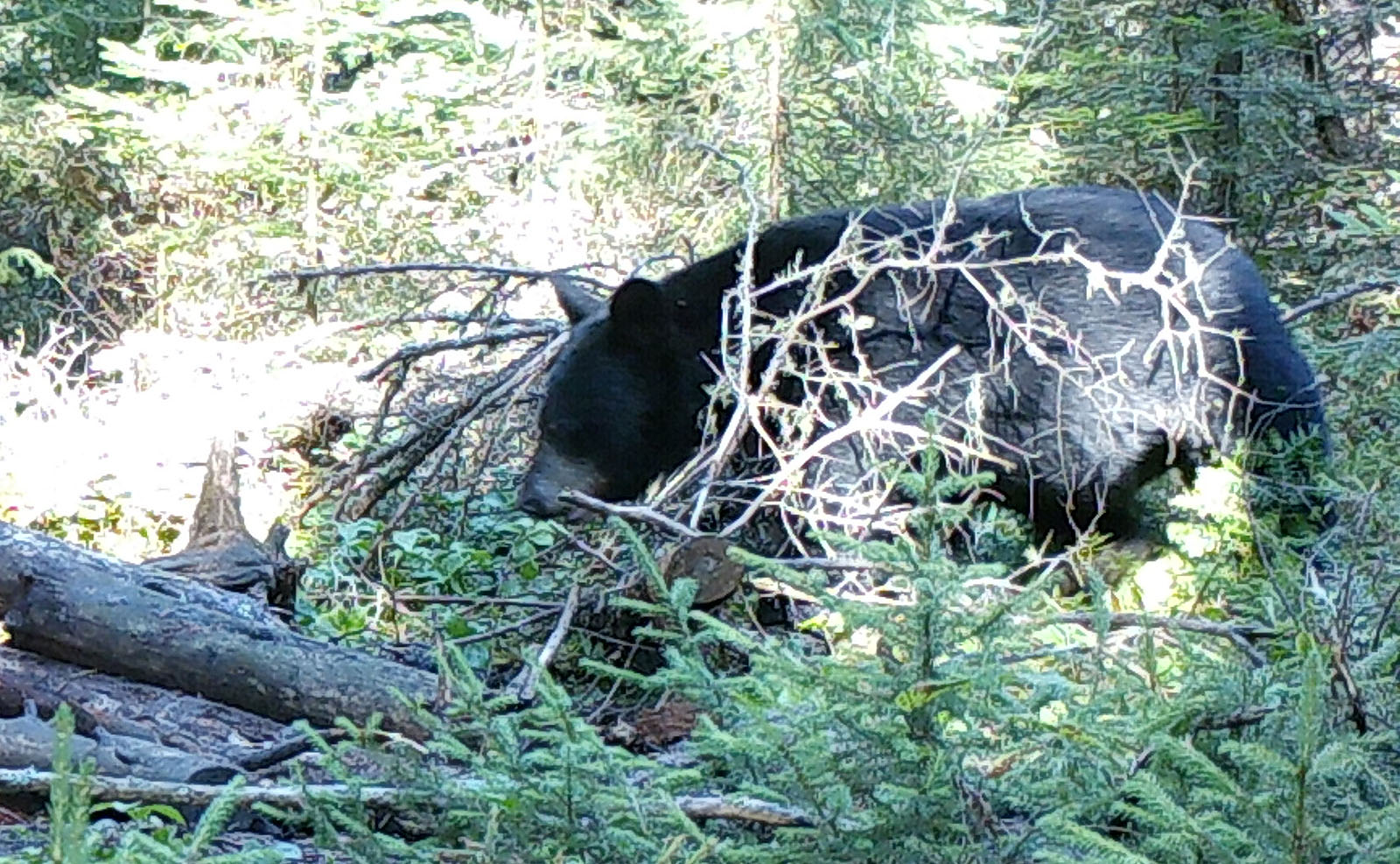 Bingo! The bear stepped clear of the limbs and brush. Chef saw his opportunity and drew his bow. The bear looked in his direction … and then back to the logs. Mike aimed and took his shot. 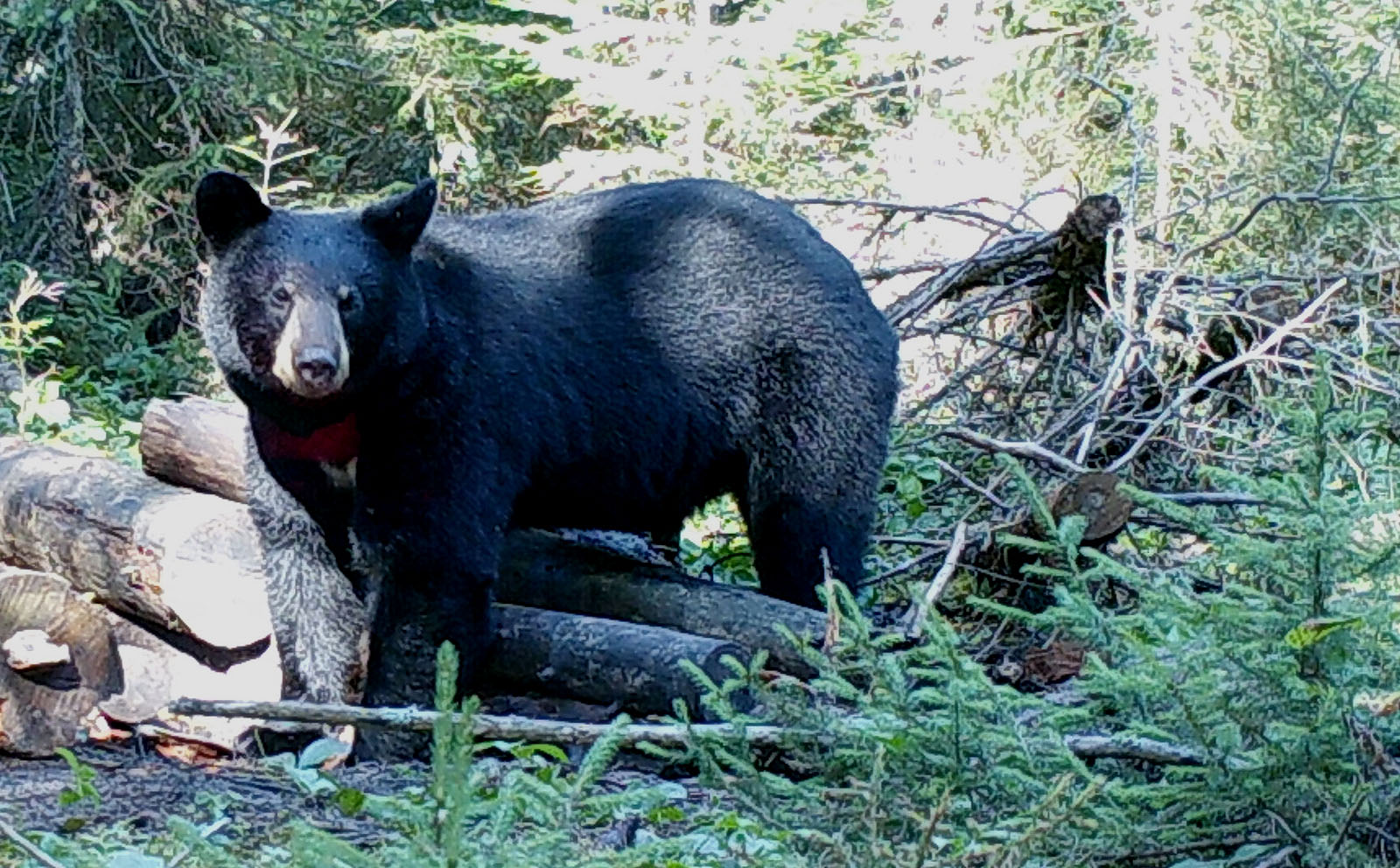 The arrow hit the bear and it bolted into the nearby trees. They listened for the sound of a death moan and heard a distant one. The Duck turned his camera toward Mike and took a picture of his smiling face. 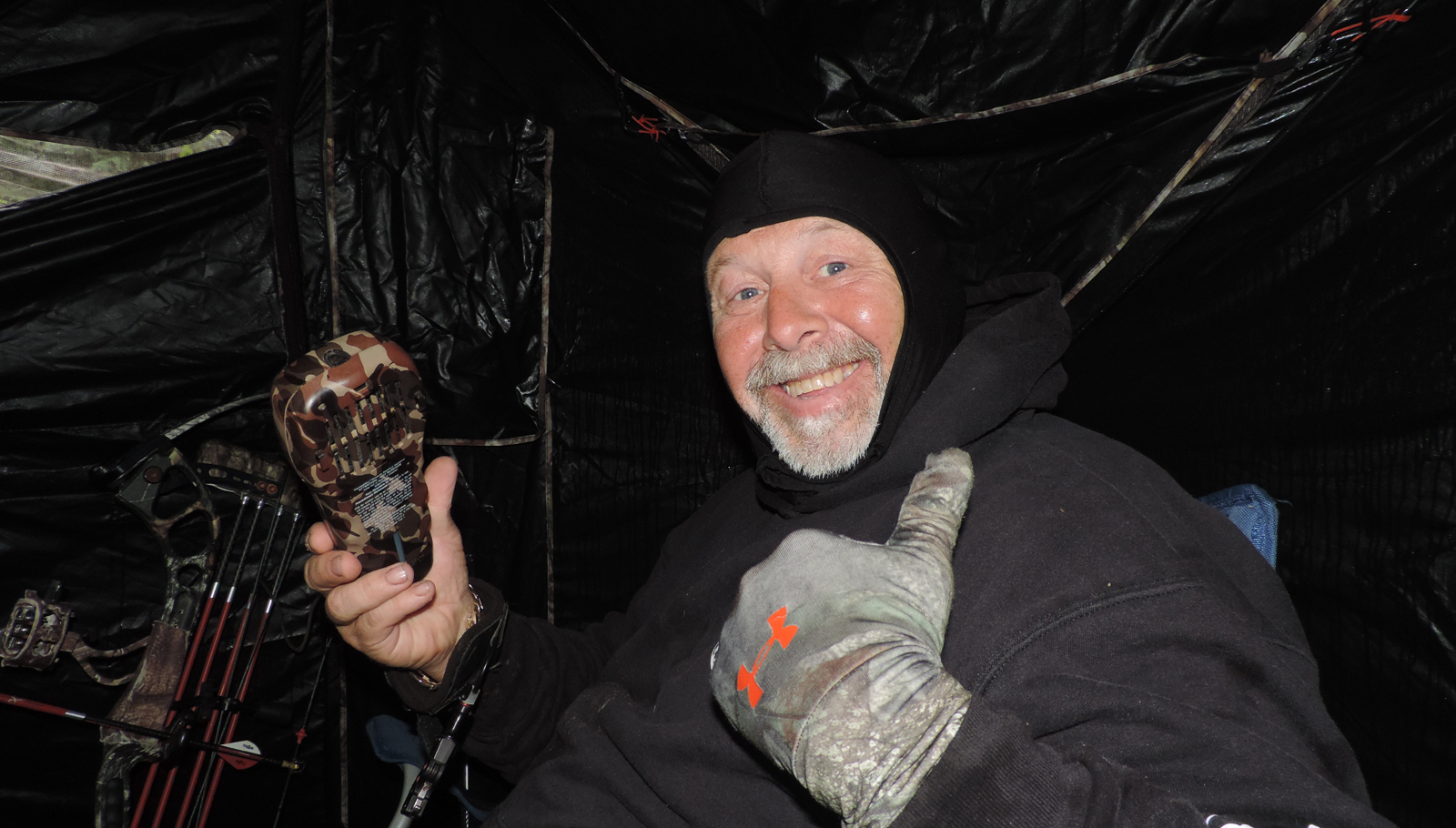 Half an hour later daylight was fading fast. They checked where the bear was shot and saw blood spattered on the logs behind where the bear had stood. But they could not find more sign in the immediate area. Since they had to pick up Fred and I they left to do that.

Fred had also shot a bear and he and I had trailed it the short distance to where it lay. All 4 of us drug Fred’s bear out of the woods to the truck. We decided to get the Chef’s bear in the morning.

It was raining in the morning and when we got to Chef’s hunting spot it was pouring. We walked in the direction we heard the bear’s death moan and found him. The Duck used the video camera to get the recovery. But  discovered that he did not have the video capture turned on because we didn’t have the recovery on video.

It’s a mistake we rarely make. The second mistake was that I didn’t go with them and get a picture.

If You Do This – You Are Stupid!