by Luke Clayton
in Bowhunting Articles, Wild Hogs
0 0
A A
0 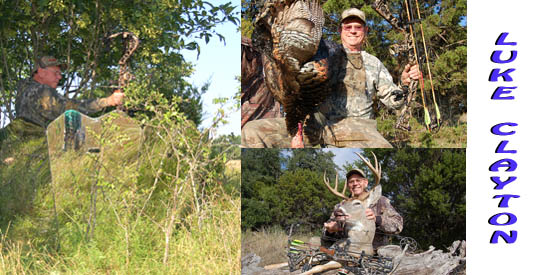 Outfitted with special nighttime lights Luke Clayton takes his bow out for his first taste of hunting pork in the dark of night.

I’ve hunted hogs just about every conceivable way but this night’s hunt stalking hogs using specialized lights on my bow was to be a first for me.

As Mark and I drove across the dam of his lake, he pointed out to alligators swimming casually close to the bank. “One of our hunters harvested an 11 footer last year from the upper end of this lake.” says Mark as I keep ca lose watch on the reptile swimming a few yards out from shore.

“Where will we be stalking hogs tonight?” I asked.

“The upper end of the lake”, he replied. This evening was going to be interesting. I’m  accustomed to contending with water moccasins and copperheads but the thought of an alligator lying in that knee high vegetation along the shore did cause me to have second thoughts as to just how much I wanted to stock my freezer with fresh pork from the wild! Mark and I have hunted together for years and I’m sure that he knew that once he got me into this hunt, the adrenaline rush would take over and I would forget all about becoming gator bait!

During the summer months, wild hogs can become nocturnal. If available, they will will often visit feeders during the last few minutes of daylight but they forage throughout the night. Hunting them with a bow at night requires specialized equipment. It’s obviously necessary to see the hog in order to shoot it and, one has to be able to see the sight pins in order to aim. Vital Gear makes the Black Light that attaches to the bow and emits just enough light to make the sight pins visible, solving the sighting part of this equation.

Mark Balette with B & C Outfitters in Groveton, at full draw with his ‘night hunting’ hog rig. Photo by Luke Clayton

Our plan worked perfectly. Thanks to the faint light of the moon, we could see the weeds moving and again, heard the guttural grunts of the contented feeding porkers. A slight change of our position put us just in front of a stand of tall weeds. The dark form of the lead hog soon appeared from the heavy cover. I guessed him to be about 15 yards, a slam dunk bow shot in most situations! He (or she) the hog could have just as easily been a sow, was just right for the BBQ, weighing about 125 pounds.