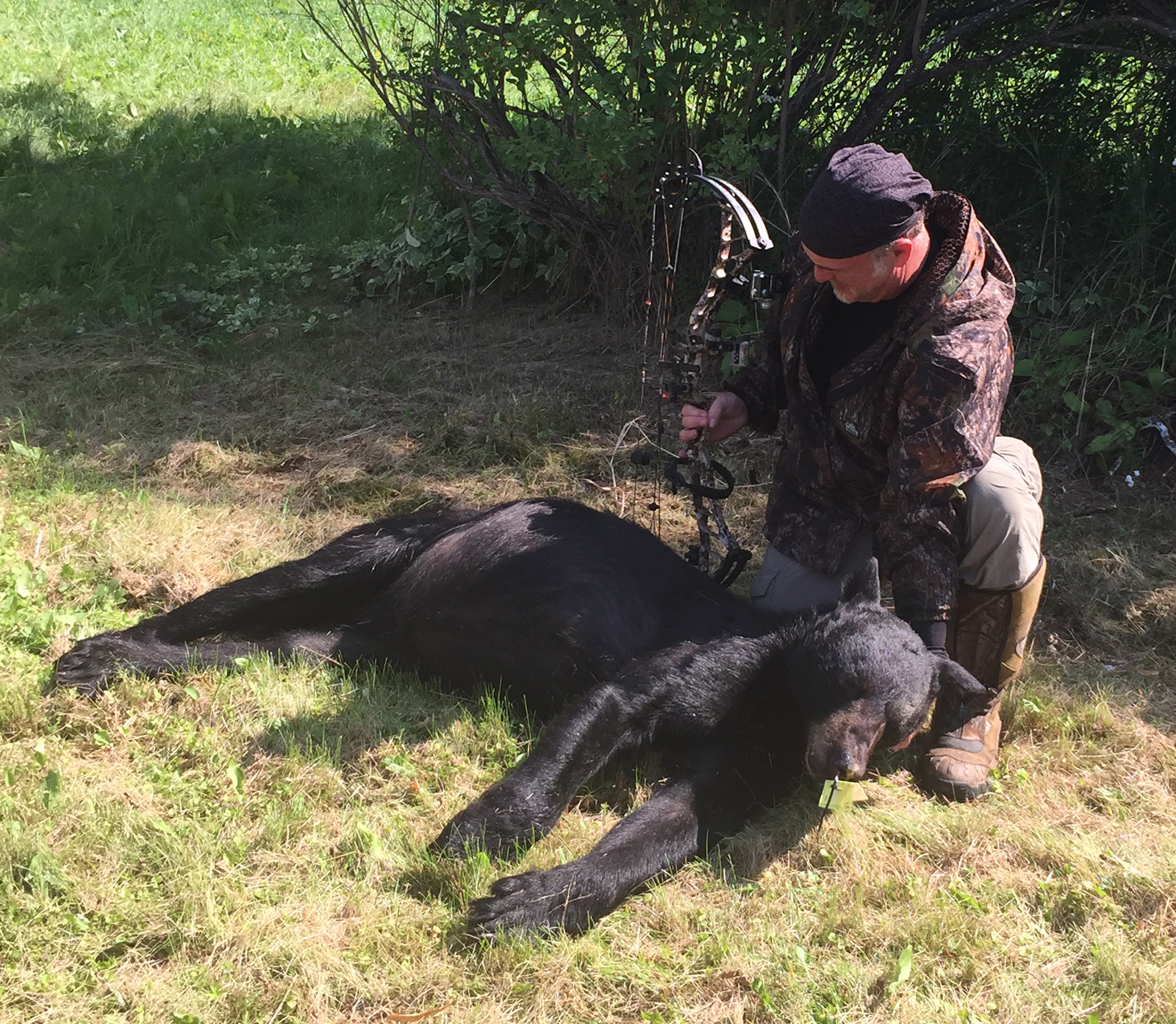 On the first afternoon’s bearhunt Don Himmelberg put out a bacon burn and got in his stand at 4:00. The weather was overcast with a steady breeze.  He was hunting in an area where he had tagged a mahogany colored bear 5 years ago. The area was quiet for three hours.

With no pre-warning, Don saw a bear in the woods, walking slowly toward the now, burned out bacon burn. Don saw a quartering away shot opportunity materialize and he drew and took the shot. The arrow penetrated into the rib cage and went in past the fletching.

The bear ran, jumped a log and took turned to the right and continued in that direction. Don heard several loud limb cracks and the woods became quiet.

Half an hour later Don descended from his treestand. He found blood in the trail where the bear had jumped over a fallen tree. There was no arrow. He marked the trail and went to his truck and drove to pick up Robert Edwards (his friend from Tennessee).

Back on the track,  he and Robert Edwards found Don’s arrow in the trail.  The blood trail continued a few more steps and Don noticed a black hump ahead in the thick undergrowth.

It was the bear. 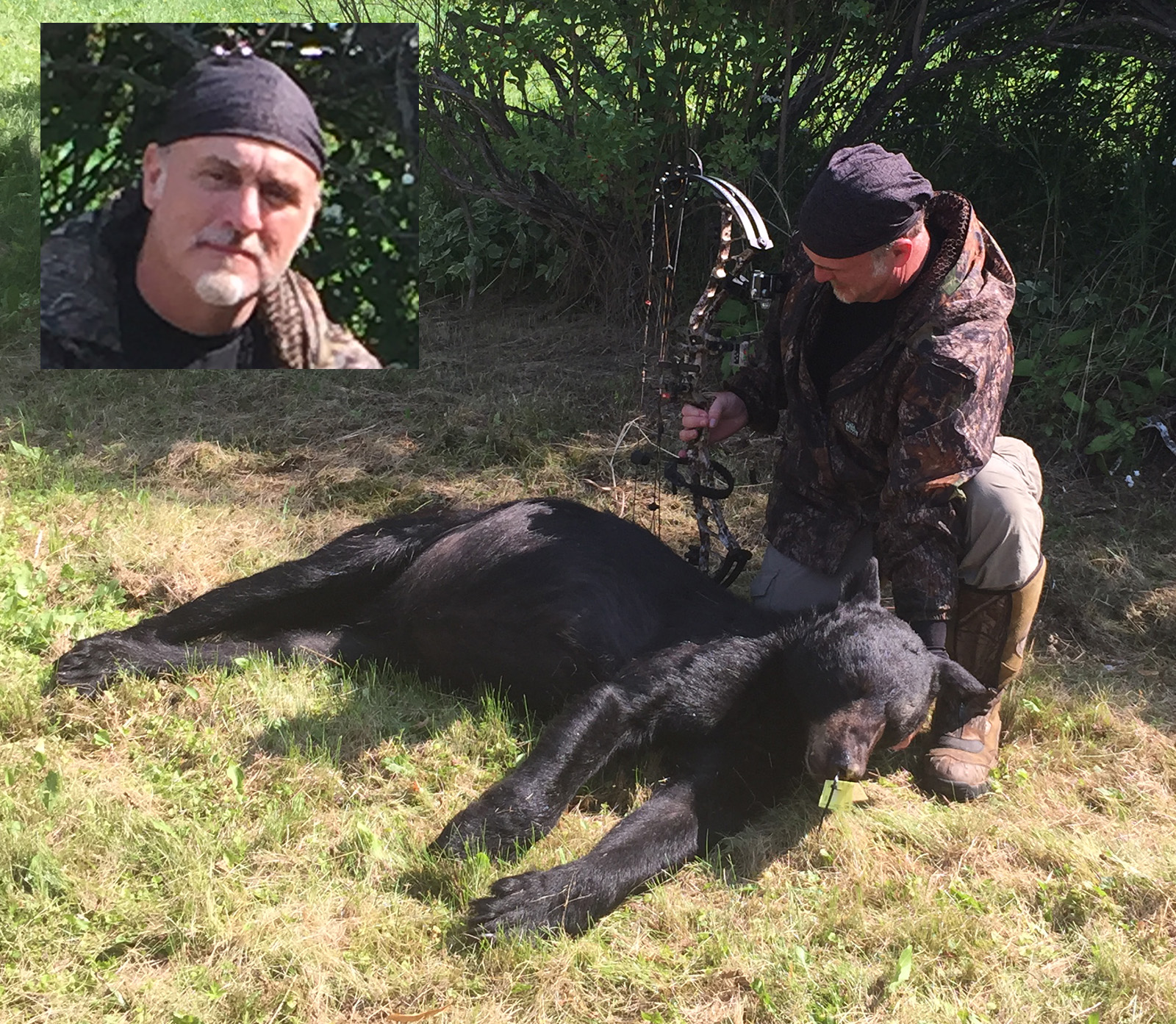 Don told me, “I was very thankful for this opportunity to shoot my biggest bear yet. It was a wonderful hunt, the food was great, the fellowship was what made the trip worth while.”

Don is quite a cut up and enjoys joking around. His frenchman aviator imitation had us all laughing and we made him do it almost day. But he had plenty of other laughables up his sleeve. Here is one.

Don Himmelberg owns his own law firm in his home town Nashville, Tennessee and specializes in Criminal Defense. Seven year’s ago his wife gave him a bear hunt in Maine as a Christmas gift. He went and saw a bear but didn’t get one. Afterward, he got on the internet and saw the past bear hunts on Bowhunting.net and booked a hunt with Fred Lutger for 2007 and bagged a mahogany color phase bear on the third day.

That year Don was hunting where Fred had put a ground blind and Don was apprehensive about being “eyeball to eyeball” with a bear but went along with it. The first hunt he saw 3 bears, two blacks and the mahogany bear. The mahogany came to the bait and grabbed a scent set up and ran into the woods and crunched away on it loudly.

The next afternoon the mahogany bear returned at 6:00. It poked its head out of the brush and turned right back around. At 7:30, without Don’s knowledge, the mahogany bear worked its way behind the blind and when it started toward the bait Don saw it through the blind’s window … 12 inches away.

Don drew when it was 6 yards from the blind and quartering-away. The bear heard the arrow slide through the whisker biscuit arrow rest and bolted 20 yards past the bait. Then it walked back to the bait and stood up on a log, broadside at 10 yards. Don drew again and took the shot. It ran 30 yards into the brush and Don got to hear his first death moan. And that’s the story of his first bear.

In My View – More than a Trophy