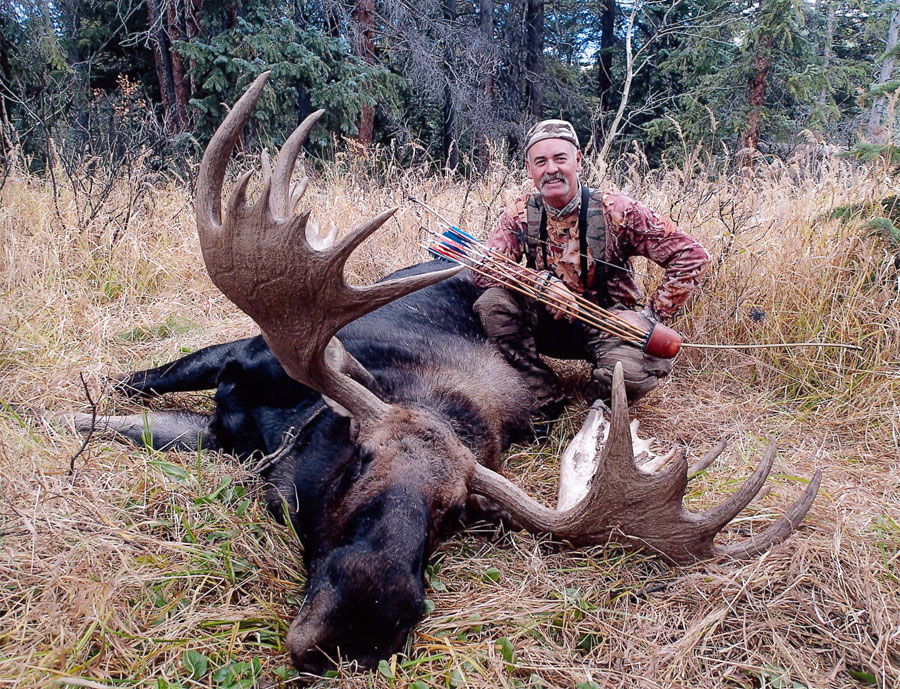 In the early afternoon of October 8th, 2015, Bobby Hebert of Golden, Colorado, found himself a mere 9 yards away from an incredible Shiras bull moose. Bobby’s years of patience and countless hours of practice had paid off. Mr. Hebert’s moose has an initial entry score that is 8 2/8 inches higher than the current World’s Record. It is yet subject to Panel Judging, which may change the final accepted score for a variety of reasons, including initial mis-measurement, unusual shrinkage, and other factors.

The current World’s Record Shiras moose is 185 6/8 inches taken in Sheridan County, Wyoming in 1987 by Richard E. Jones “We were making our way around to where I had been calling the night before, when my hunting partner, Mike told me to stop,” says Bobby Hebert. “He thought he could see a moose in the trees ahead. I slowly raised my binoculars to find it was the bull we had named, Yukon Jack, Mike told me to stand behind some pine trees and he proceeded to walk away. The moose seemed to watch my hunting partner disappear into the trees beyond me and started towards my direction.

The massive bull grunted with every step as he walked by me at 9 yards. I took a single step and let loose with my arrow, watching it strike home. He ran off about 40 yards and fell over. When I returned with Mike to see my harvest, the bull was standing up. I maneuvered around him for another shot, but he disappeared into some trees. We found him lying down with his head behind a pine about 20 yards away. I nocked another arrow, let it fly and it hit true. He ran another 35 yards and collapsed. I literally shed tears of reverence and joy, giving thanks to the Man upstairs. I am incredibly grateful to have taken part in this once-in-a-lifetime hunt.”

“The Pope and young Club is excited that Bobby Herbert has entered his magnificent Shiras bull moose into the Records Program as a pending Pope and Young Club world record,” says Ed Fanchin, Pope and Young Club’s Records Chairman. “The size of the moose is a testament of sound conservation work and game management. It’s great to know that animals of this class are currently roaming the woods. What I like most is the story behind Bobby’s hunt, and how it was a true example of Fair Chase, ethical bowhunting.”

Mr. Hebert’s moose will be entered into the current, ongoing 30th Recording Period—the biennium
representing entries accepted into the P&Y Records Program from January 1, 2015 to December 31, 2016.

At the close of every two-year biennial recording period, numerical awards and honorable mentions are awarded to the most outstanding animals in each species category entered during that recording period. New world’s records are verified and proclaimed, and awards are presented to these outstanding animals during the Pope and Young Club’s biennial convention and awards banquet.

Note: Panel Judging is a process of verification of the final scores of antlers, horns and skulls of the highest ranking North American big-game specimen entered during that two-year recording period. A handpicked team of highly knowledgeable and experienced certified measurers gather for the actual scoring.

The Pope and Young Club is a non-profit North American conservation and bowhunting organization dedicated to the promotion and protection of our bowhunting heritage, hunting ethics and wildlife conservation. The Club also maintains the universally recognized repository for the records and statistics on North American big-game animals harvested with a bow and arrow.