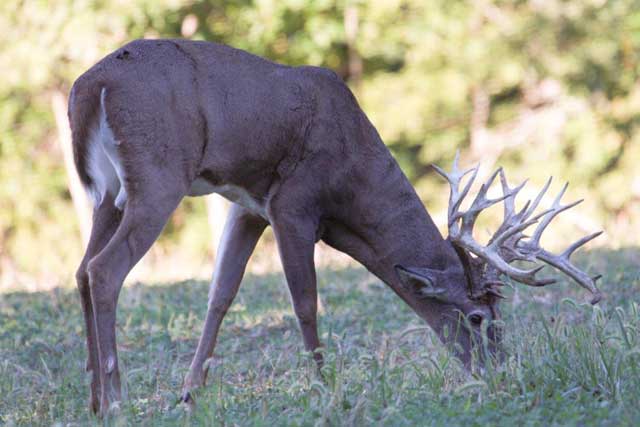 Another of the fine bucks we saw at Oak Creek.

I want to start this article by saying, “I’m the luckiest man on two feet.” I have a beautiful wife of 48 years and I’ve lived a life most men only dream of. I’ve worked in the Archery industry since 1978 starting as a Pro Staffer, a Factory Rep, owned a Bowhunting Magazine, was a Field Editor, Outdoor Writer, Member of the Archery Hall of Fame Board, Guide, Ranch Manager of a Large Ranch in Texas and TV Host of Tex/Mex Outdoors for the past 11 years. I’ve seen many hunting operations and one of the best I’ve ever hunted is Oak Creek Ranch in Bland, Missouri, located in the beautiful Ozarks.

In November of 2013, I traveled to Oak Creek Ranch to hunt with my friends Donald and Angie Hill, ate some of the greatest food ever, including the world’s best Bread Pudding and bowhunted for some monster bucks in what has to be God’s Country. Once the good Lord paints the Ozarks with his paint brush the hardwoods, cedar and soft wood timber become some of the most beautiful spots in the world. Plus going to Oak Creek Ranch at this time of the year is truly a memorable time to be bowhunting. Although I have hunted Oak Creek for the past 5 years I was finally able to hunt three days during the first week of November, prime rut.

Wayne Burns, my videographer and editor and I arrived at Oak Creek Ranch on the 3rd of November. We were pumped as we had a cold front coming in and of course it started to rain. In all of the years I’ve hunted at Oak Creek Ranch it seems to always rain! Since, I figured it had to be me I’ve been thinking about calling all of the ranchers and farmers in the summer during the drought and make an appearance to bring them rain.

When we drove into the Ranch driveway, the colors were gorgeous even in the late evening sunset. Fortunately our arrival was just in time to sit down for supper with Chris & Susan Long along with the entire gang at Oak Creek let me tell you, Bo the Chef at Oak Creek can really make some of the best meals you’ve ever eaten. I knew I wouldn’t be losing any weight this week. After a great meal we got together with the guides and then checked out the equipment to make sure my bow was hitting were I aimed. That’s one big bonus about Oak Creek Ranch; they have an indoor and outdoor archery range where you can shoot your bow day or night, regardless of the weather. Obviously, its very important to make sure your equipment is working properly.

4:00 am came early. The weather had changed from the day before and was now 50 degrees and overcast with the wind out of the Northwest at 10 mph with the humidity about 50% plus we had a dark moon. Perfect hunting weather for rutting bucks. Shane Dorton, my guide and great bowhunter in his own right and I downed some coffee and discussed the day’s strategy. Shane knows the ranch land like the back of his hand and suggested that we first do some scouting since we had a lot of wind howling around the Ozark hollers. We figured, due to the strong wind and dark moon the monster bucks were most likely bedded up, not moving.

As the morning progressed we saw 12 different bucks, most were bedded and the rest were chasing does as the rut had kicked off and those bucks were fired up but the doe’s wanted no part of those horned up bucks. We did see a couple of bucks trying to tend doe’s, but most of the bucks were young deer. Shane advised that the old dominate bucks were not very froggy; however the young bucks were fired up. Around 10:30 I said to Shane, “I can hear a cinnamon roll calling my name.” Enough said, we were on our way to the lodge.

Mid-day, is the time to take a nap, practice shooting our bows and doing some visitation. Early that afternoon we picked up our gear and decided to continue driving around looking for a rutting buck till about an hour before dark, then we would go to a huge food plot that was attracting doe’s and rutting bucks.

As we drove around we were watching for that special Spot & Stalk bedded buck to use a decoy as a diversion for the shot. Around 4:00 and after several different stalks, most were blown due to the changing wind so we went to a ground blind on a food plot. We were using a Primos Scar Buck Decoy after placing the decoy about 18 yards from our blind and spraying it down with Nose Jammer we crawled into the blind. Once we got settled in we started rattling and using a grunt tube to try and attract a buck to us. Within 30 minutes Shane managed to call in a small 8 pointer who came to the decoy but was put off and spooked when the decoy’s head started to bob up and down!

Then, out walked Muy Grande, the monster of monsters pushing 250 Plus points! He walked in all bristled up, stiff legged with the swagger of boss hog! This Buck was PO’D, he circled the blind all the time snort wheezing, grunting, Nose Jammer was working! As he walked around the blind glaring at our Scar decoy he worked 2 different scrapes and all the time I was wanting to pick up my Nikon 500 Camera and take one of those magical photos but every time I started to move Shane would put a hand on my shoulder. I knew he was saying don’t move! For a second time the buck strutted around Scar glaring at him! The only reason our decoy did not get his butt kicked was no wind and the bobbing head was not moving. Then, the buck walked out into the middle of the food plot. As the evening progressed we had the monster buck along with five other bucks chasing a hot doe all over the food plot and we must have heard over 15 snort whizzes from them all. In all of my years of hunting I’ve never seen that many bucks chasing one doe and never heard that many snort whizzes! That evening was action packed! That night the talk around the supper table was nonstop about rutting bucks.

The next morning started out wet and nasty, Shane said, “It would be easier and drier to do some driving around to spot some bedded bucks.” Another great idea and as we drove around we did spot several really great bucks, but not one of the set ups was good to try a spot and stalk or doing any rattling. As the morning progressed the rain continued and the wind got worse. We returned to a ground blind on another food plot and sat for 3 hours with nothing moving. Finally we called it quits and went back to the lodge and some more of Bo’s great food.

That afternoon was overcast, slow drizzle, strong wind out of the SSE-9 MPH and 50 degrees and dropping. During our morning travels we had seen a huge 10 pointer and decided to try and find that buck hanging out in a Creek Bottom in a huge patch of water grass. We did find 3 really nice bucks bedded down and decided to try and stalk one of the bucks that was on the outer fringe of the patch of water grass. The wind was right so Shane and I started our stalk. Before we had hardly gotten started we heard a heck of a noise and saw a doe running for her life with 4 monster bucks in hot pursuit.

Everything went downhill quickly as every buck within a mile radius was up and running in every direction. Back to the drawing board. So we decided to move on to a different food plot and do more rattling and vocals. On the way we found a scrape line with rubs and licking branches along an old logging road that was an ideal area to rattle and call. I got down on my knees, near a huge white Oak tree with a small brush pile in front of me and a small cedar behind me for a complete breakup. It was an ideal set up for a bowhunter. The first buck we rattled in was very nervous and moving in and out of the cedar constantly and would not give me a shot. It was now raining hard but Wayne, Company Host & Videographer had placed a rain cover on the camera so he was ready to film. Shane was doing his thing, breaking brush, rattling, banging horns, snort whizzing and using aggressive grunts, sounding like two monster brutes fighting over the rights to breed a doe.

I’ve hunted with a lot of guides but the men at Oak Creek are some of the best at what they do! That being said, I’ve never heard anyone as aggressive as Shane. Not 5 minutes after Shane stopped his sequence of rattling we heard a buck coming to the horns through the cedar thicket. From the noise, it sounded like a freight train knocking down brush and saplings. I could easily follow the path of the buck as he came on tearing up real estate. Drawing my bow back I concentrated on an opening in the cedar as the monster buck popped out in the opening facing me dead on. I settled my pin on the bottom of the neck, the apex of the neck meeting the body. I heard the Grim Reaper tipped arrow hit the sweet spot. The buck spun and bolted off in what would be a 60 yard death run, spilling a blood trail that a blind man could have followed. When we approached the fallen monarch there was absolutely no ground shrinkage. This was a huge 10 pointer with an additional kicker 8 points and a monster SCI score of 218. A true trophy of a lifetime.

Break the Rules with Barnett Razr and Razr Ice Crossbows