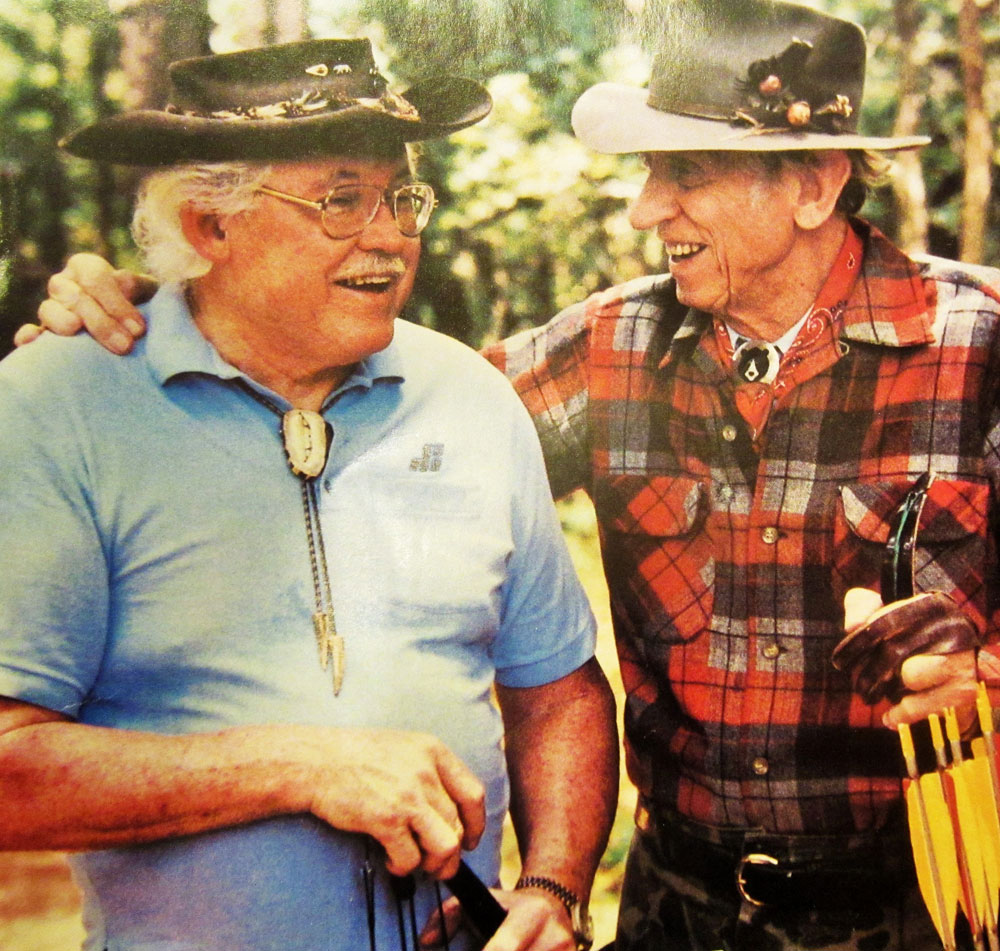 Fred Bear & Tom Jennings These are two bowhunting legends I knew well. I first met Fred Bear in ’72 and worked with him and other Pope and Young officers on the Club’s first record book. And about this same time I field tested a Tom Jennings (left) compound bow for a report in BOWHUNTER magazine about these increasingly popular mechanical bows.

ONE FRINGE BENEFIT of serving as Editor of BOWHUNTER magazine for 35 years – and being a serious bowhunter for more than 50 – was meeting and getting to know a good many true legends of our sport. Over the years I’ve written about most and shared hunting camps with more than a few. Regrettably, some have since passed on; thankfully, others remain close personal friends. Regardless, all live on in my thoughts and in the minds of those who follow the trails they blazed. Like you and me, these pioneer men and women loved drawing a stout bow, picking the exact spot they wanted to hit, then releasing smoothly, and seeing a well-aimed arrow flash away in speedy flight.

I’m confident that most readers will recognize their names. Many will possess at least some familiarity with the legends’ most noteworthy accomplishments. A few won’t know them – but should, because the rich history of North American archery and bowhunting would not be what it is without their involvement.

So check out the following questions. See how well you do correctly identifying the legends and related facts. At the very least, you’ll likely learn something new about these trailblazers who left their indelible mark on the sport we love.

2.The first licensed bowhunter to take a whitetail deer in the United States killed a spike buck on December 6, 1930, exactly 10 years to the day before I was born. He also was a successful broadhead manufacturer from the late 1920s until the 1950s, and helped organize his state’s bowhunting organization. Name the man, who lived into his late 90s, and his home state.

3.Seattle bowyer Glenn St. Charles founded the Pope and Young Club in 1961 to prove the effectiveness of archery tackle in big game hunting and record detailed information about the animals archers harvested. He served as his organization’s President until 1972 when he was replaced by the first Hunting Editor of BOWHUNTER magazine. Name the man who replaced Glenn as P&Y’s second President and the year the Club’s first record book was published.

4.Chuck Adams made bowhunting history in 1990 when he successfully completed the first “Super Slam” of all recognized North American big game species. Name the animal he arrowed to complete his quest and identify the second man to take the so-called “Slam.”

5.The current World Record for typical whitetail deer was killed in a soybean field near Peoria, Illinois, in 1965. At 204-4/8 inches, it still ranks as one of the largest whitetail racks ever taken by any hunter using any legal weapon. Name the left-handed bowhunter who tagged it and number of points on the buck’s oversized rack.

6. A world famous author and avid archer created a fictional character who was featured in a television series starring actor Raymond Burr in the title role. Name the award-winning writer and the name of his popular literary character.

7. Bob Swinehart was the first bowhunter to take Africa’s dangerous “Big Five” (lion, leopard, elephant, rhino, and Cape buffalo). The Pennsylvania archer, a protégé of Howard Hill, recounted his Dark Continent adventures in a popular book published in 1970. Name the book’s title and which of the Big Five species he arrowed with a Pearson recurve, rather than his trusty longbow.

8. In 1972 the Archery Hall of Fame inducted 7 deserving individuals whose success with the bow and arrow made a lasting effect on our sport. Six inductees were men—including iconic bowhunters Fred Bear, Howard Hill, Ben Pearson, and Maurice Thompson— but one woman was included in this elite group. Though known as the “Greatest Woman Archer of All Time,” she also loved bowhunting. Who was she? Also, name her Archery Hall of Fame husband, whose bows are still produced and widely used by target archers and bowhunters alike.

9. In 1966 a Missouri deer hunter, fed up with whitetails ducking his slow-flying arrows, changed archery history by developing and patenting a bow design that would deliver an arrow to its target faster than conventional hunting bows. Within a decade, 2 of every 3 bows were mechanical. Name this man known as “The Father of the Compound Bow.” Also, name the contemporary Hall of Fame bowyer (known as Mr. Compound”) who bought patent rights to mass produce his own line of high performance compounds that over time popularized the bows worldwide.

10. This Archery Hall of Famer was born in southern Illinois in 1940 but grew up in southern Indiana, where he developed a passion for shooting bows and arrows. He helped organize the Indiana Bowhunters Association and joined the Pope and Young Club in the 1960s, later serving on the P&Y Board of Directors for 24 years. His service included the longest Presidential term in P&Y history, 1984-2002. Later still, he was a founder and President of the Compton Traditional Bowhunters.

11. Name this bowhunter and the best-selling archery how-to book he authored in 1988.The first Pope and Young Club record book was published in the 1970s. It featured just over 300 pages and a couple of thousand big game entries. The next book, due to be published in 2016, will contain more than 100,000 entries printed on nearly 1,000 pages and listed in a special CD. Name the Editor of the very first P&Y record book and the member who loaned the Club the money necessary to pay the printing bill.

12. Fred Bear went bowhunting for the first time near St. Helen’s, Michigan, in 1929 and arrowed his first deer in 1935 during an Upper Peninsula hunt. An Ontario moose was his second big game species (1945) and a year later he tagged his first black bear. Later in “Papa Bear’s” bowhunting career, he took 2 World Record animals. One was downed in British Columbia in 1957; the second fell in Alaska in 1960. Name these 2 big game species.