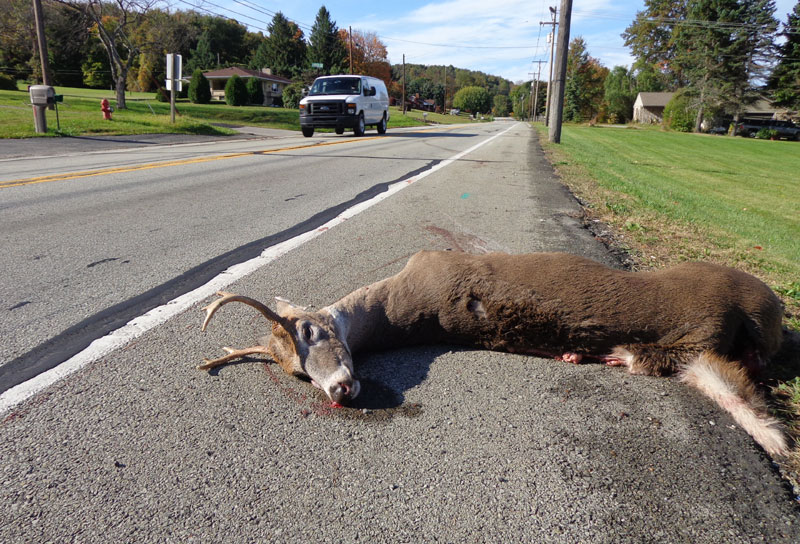 Many of the traveling yearling bucks are killed on our roads every year. Their dispersal brings bucks in contact with cars and trucks.

Here is some basic whitetail science that every hunter needs to understand. Yearling bucks, those 1-1.5 years old leave the home range they were born in. They disperse to find and establish their own home range, where they may spend the rest of their life.

This facet of whitetail behavior is well understood by biologists. Yearling buck dispersal is a God designed strategy to mix the gene pool. Here is what happens. A doe family unit is comprised of a mama doe, her fawns of the year (usually a buck and a doe fawn), and the female fawn from the year before plus the male fawn from the year before. These older offspring are 1.5 years old in September as they were born 18 months earlier in May or June the year before. Biologists refer to these 1.5 year old deer as yearlings.

During this first year a fawn is schooled by the mama doe on what comprises danger. They learn about human scent and visually what humans look like. Recent research indicates that deer see into the UV spectrum and that likely means that deer often see and avoid predators that emit the alarming blue aura that UV-brighteners leave in clothes.

Then in late summer of the male yearling is actively expelled from the doe family he was born into. A percentage of the dispersal also occurs in the spring when the new crop of fawns is born. What was once a protective nurturing relationship changes and she actually Jeckle and Hyde’s him. The mama doe is actually is rough on her yearling buck and forces him to leave or disperse.

Now the interesting part. In a recent Pennsylvania study, these yearling buck deer were tracked with GPS collars. Pennsylvania is roughly bisected horizontally by route 80. North of route 80 the landscape is largely wooded with a hardwood forest. South of route 80 the landscape is mostly broken up with a patchwork of agriculture. Yearling bucks were collared both above and below route 80. When it came time for yearling buck dispersal, something strange happened.

These age classes of bucks are the easiest for bowhunters and rifle hunters to kill as they are largely unfamiliar with their home range. They don’t know where the safe areas are, or the sanctuaries, they are just learning the ropes when they hear the twang of a bowstring.

Studies in the Midwest have revealed that some yearlings disperse even further distances. Some travel 20-30 miles to establish their home ranges. Quality Deer Management methods suggest that you don’t shoot the yearling bucks. Let them get established and grow up into mature bucks. The first thing you’ll notice is that they will become a whole new animal to hunt when they are 2.5 years old and are familiar with the escape cover within their home range.

There is one strategy some managers use to cheat the system. If you harvest the mama doe before yearling buck dispersal there is some evidence that many of those yearlings stay in the home range that they were born in. Thus, you can improve the buck to doe ratio with your own stock of bucks. The only catch is that the gene pool is not mixed and that buck will eventually breed his sisters and aunts.

Everyone Should Have a Sidekick

How to Field Dress a Wild Turkey