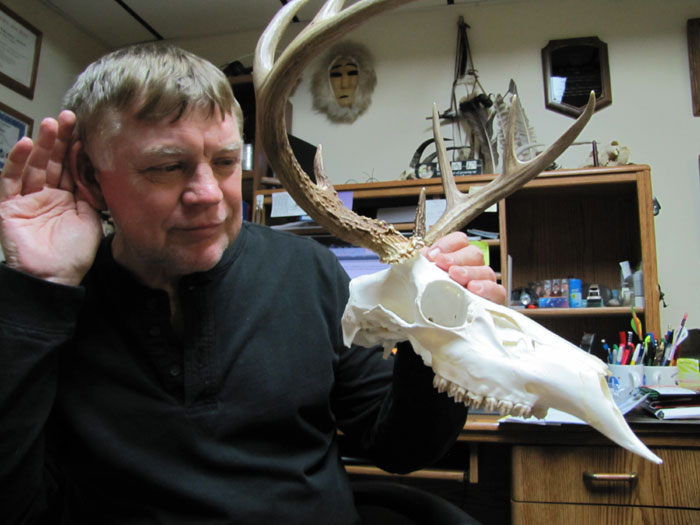 Deer hear about like us. Not very special hearing, but when combined with their other senses they are quite an adversary.

Deer hearing…there is a lot of fluff out there on this topic. It seems everyone has an opinion, but what is the real deer-hearing story. First, let’s look at what we call anecdotal evidence. That big word means, what we’ve observed with our own eyes. We’ve all done that.

We have all watched deer ears swivel around like radar dishes trying to home in on a sound. Deer are active listeners. They proactively listen for danger. This is one way they enforce their safety zone. They hear predators coming. We agree they can use those big-cupped ears to focus on a sound. If you are an experienced hunter, you will always watch a deer’s ears, as he will often tell you that there is an approaching deer behind or to the side. They seem to hear them before we do.

We also know that they are capable of cataloging dangerous sounds and determining when to be alarmed. An urban deer may tolerate a bicycle nearby but not the cadence of human footsteps in the brush. Metal noises seem to alarm deer more than a squirrel digging in dry leaves. In addition, human talking or coughing is a curious and unexplained audio component.

I was once hunting in Kentucky while I had a bad cold/cough. I was in a treestand above four deer feeding on acorns when I started to cough. I actually gagged and coughed like I needed a life-flight ride…but the deer only raised their heads once and then ignored my coughing. I was only 20-yards away and above them. Later, I heard a deer gag on an acorn. Hmmm, it sounded a little like me!

For some more hands-on science, I have spoken to deer under my stand at the end of the day. These were not urban deer. I have said, “Hey deer, I need to get home for dinner and I’d appreciate it if you’d just wonder off so I can climb down.” They have raised their head, but not run off as if a wolf was after them. Unless they combine senses, say,  both hear plus see or smell you, human voice doesn’t usually turn them inside-out. Go figure. But barking like a dog does seem to make them vacate.

I recently helped my son Cory boil and bleach a buck skull. We got an unexpected bonus; ear drums boiled out of the skull. Those “ear bones” prompted this article and the fact that I have had the deer-hearing question posed at seminars I’ve conducted. Here is the science.

Like so much whitetail science it came from the Univ. Of Georgia and Texas, A&M. David Osborne and Larry Marchington discovered some unpublished study by Art Stattelman that involved a soundproof room and deer responding to sound for food. A sound machine generated sounds at increasing levels until the deer responded to the sound. The results were interesting. Deer and humans apparently can detect sounds of low-to-moderate frequency at approximately the same intensity.

Another researcher from Texas A&M University replicated a similar experiment with deer hearing and found that they could hear about like we upright walkers. They heard best between 1-8 Khz with a peak around 4 Khz.

There is one new sound in the whitetail woods that deer seem to hate. It comes right after a string twang. It’s a “Swhack.”  That’s a sound I often use to end a hunt. You should try it. It may give you a buck skull to boil and you too may find ear bones.

On another final audio note, I have sat at deer study group meetings where research was presented on those deer whistles you stick to your bumper. Seems like they should hear my truck coming down the road! I can hear it. Moreover, my truck is easy to see, especially at night with all those lights on it. If you are wondering, those whistles don’t seem to help. And, that’s the deer ear story.