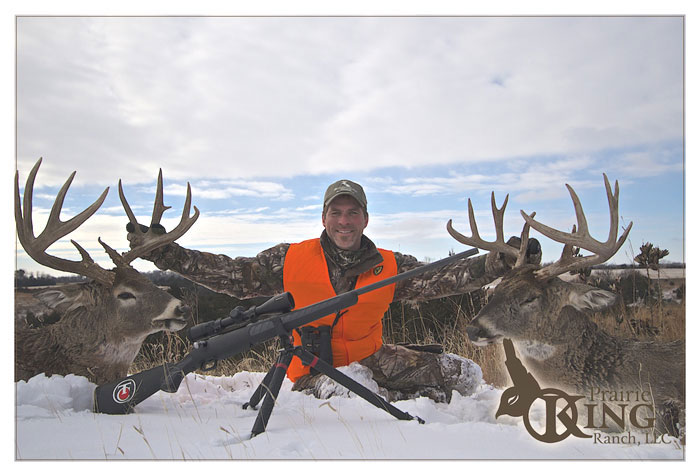 Being blessed with a 60 acre family farm has taught me a lot, while allowing me the opportunity to practice my amateur land management practices on a small scale. I’ve done it all- created bedding cover and foodplots, mineral sites and water holes. And… as a result, we’ve killed some great bucks on our small farm. When I first found out I was going to have the chance to speak to land management legend James Brion- I got really excited. James has made a living out of my hobby- successfully managing hunting properties for over 25 years.

When I started talking to the Nebraska native who now calls Montana home, I was intrigued. When he sent me a picture of two giant bucks he killed this fall within 10 minutes of each other- one a 150”+ and the other, well over 170”- I was obsessed. I had to learn more about how this guy is growing bucks like this.

In an industry where most outfitters can’t make ends meet in the first few years, a veteran like James in an anomaly. James said this about himself, “I’m a business major with a land management habit”. He’s got his hands in a bit of everything outdoors- running a hunting ranch and outfitting business, consulting for other landowners, and producing his popular show Nosler’s Magnum TV, and running his outdoor video production company Magnum Global Media. “Right out of college I bought my first piece of land and ran hunters on it to help pay the mortgage. I had to learn quickly how to keep deer around because if I didn’t have loyal hunters, I would lose the farm.” I guess sometimes hitting the ground running and “trial by fire” like James experienced is the best way to learn.

James shared with me, “My philosophy of management is simple- I want my deer to grow one year older. By allowing a buck to reach maturity I can get a good luck at the potential the land truly has.”

Sanctuaries – Thou shall not enter

James’ first piece of advice was rather simple in theory, harder to accomplish. “I’ve managed properties from 120-30,000 acres and hands down, the most important thing is having a sanctuary. And I mean sanctuary, where we do not enter. We don’t hunt, it, we don’t shed hunt it, we don’t enter.” James and I talked more and he shared that a good target to create the sanctuary would be at least 5-10% of the property devoted to it. Often more is better when possible, but a larger area like 25% just isn’t realistic for most land managers. It’s not necessarily about the size of the sanctuary, but the security that it offers the animals and the discipline it takes to stay out.

Centrally located, where the neighbors can’t snoop around or get an over the fence shot, the sanctuary location is important. Also James added that the land can’t be used for anything, no cattle grazing, no maple syrup tapping, no mushroom hunting… nothing.” He shared an analogy with me that made sense. “Imagine a sink full of dish soap bubbles. Now, a mature buck is one bubble. What happens when you put your hand into the water? The bubbles all get pushed away. That’s what a mature buck will do. When a human enters his area, he’ll push as far away as he safely can.” Brion continued to explain how he feels that big bucks try to avoid people and tend to feel most comfortable where there is little or no human interference. “Find a piece of property where people don’t go, and you’ll have a lot of deer there.” He also commented to how selfish bucks are. “You notice when a doe is startled, she’ll face the threat, snort, pound her hooves, really try to alert everyone else and figure out what is going on. You startle a buck and he just hits the hills without looking back. He’s always looking out for #1.”

To James, sanctuaries are the most important priority. He did say that he will be forced to enter one if he’s chasing off a trespasser or if they’re tracking a deer. Otherwise, for 365 days a year, sanctuaries are off limits- period.

Following the process of giving the deer everything they need on one property, bedding is very important. Ideally the bedding will be near the center of the property. “I don’t want the deer to have any reason to wander on to the neighbors.” Deer are opportunists and will bed wherever they feel comfortable. They need to be able to relax, and for that to happen they need a few things in place. First, the deer need to be able to smell what is around them. Second, they need to be able to see, and lastly, they need to have an escape route. If the deer feel comfortable, they’ll lay down and relax for a while. Bedding cover could be anything from fence lines to big woods, ridge tops to small bumps, and everywhere in between. Thermal cover like low growing conifers help them stay warm in the cold months, and screen cover like brush and grass helps the deer feel hidden. One of my friends here in Michigan currently has a dozen of them living under an old abandoned barn overhang. James confirmed the same thing about the deer he hunts, that they’ll bed where they feel most comfortable.

Also opportunistic, deer will eat just about anything. In fact, in order to keep their bacterial balance equation healthy in their digestive tracts- deer need to consume quite a bit of woody browse. That being said, they still need plenty of greens, and grains, lots of water and plenty of salty mineral. Brion also tries to keep the food centralized on his properties. “Ideally my sanctuary, food, and bedding will be in the center, but spread out a bit to get them to travel in between. If the deer aren’t moving, they’re pretty hard to kill consistently.”

This far into our conversation I followed James logic, but when we talked stands he threw me for a loop. “The key to consistently tagging big buck is to remain invisible. In fact, We don’t hunt where the deer are… we hunt in low concentration areas.” Now I was flat out confused.

Brion went on to explain what years of observation have taught him. “Big mature bucks are so competitive for breeding rights, that when they find a hot doe they’ll run off every other deer, or leave themselves. So… if you’re seeing a lot of 2 ½ and 3 ½ year old bucks on their feet, that mean’s that generally there’s not a big one in the area. If there were, the little bucks wouldn’t be comfortable showing their faces.” James told me his strategy during the rut is to find those hidden spots where a big buck will feel comfortable bringing a doe, and hunt there. Often these are overlooked spots that aren’t always easy to get to, which probably makes them even more appealing to a buck.

James likes to make sure that the hunter can easily get in and out without bumping every deer in the county. “Because… if we scare a deer of the property, he’ll most likely get killed by the neighbors.”

“This is why scent control is so crucial. You may not see that deer, but long after a hunter walks in and out of his stand the deer will be crossing those trails, smelling and noticing the human interference.” James and the Magnum guys are loyal scent control disciples. They do it all- from proper washing and storage of their Trinity scent control gear to liberally spraying down all of their clothes, and boots- before, during and after a hunt. “It’s really important to saturate boots with Trinity Blast spray before heading to a blind. I can’t stress enough how I try to remain invisible.”

Not every client James hosts is as dedicated to scent control as he is. In those situations James really relies on Trinity Blast scent eliminating spray. He makes sure that everyone gets a good layer of Trinity Blast well before they ever step foot on his hunting properties.

James also added that he is strict with his scent control 365 days a year, not just during hunting season. Even if he’s working on mending a fence, or supplemental feeding in the winter, he at least wears rubber boots and saturates them with Trinity Blast.

Many hunters think that James is “living the dream”. I asked him about that and he laughed. “I’m really blessed, I have four awesome kids and an incredibly understanding (and patient) wife. Without her, I couldn’t do any of this.” That being said, life isn’t all fun and games for James. He relies on his business degree every day because when all is said and done, the profit margins for an outfitter are quite slim, if any. “ I wouldn’t do this if I didn’t love it… It’s a lot of work to be gone for six weeks, run 120 turkey hunters, and come home to a house full of chores and projects to catch up on.”

To learn more about James, contact him about consulting, or to book a hunt, please visit his website at www.prairieking.com.

For more please go to: Nothing Gets You Closer

6 Tips To Fly Your Meat Home

6 Tips To Fly Your Meat Home