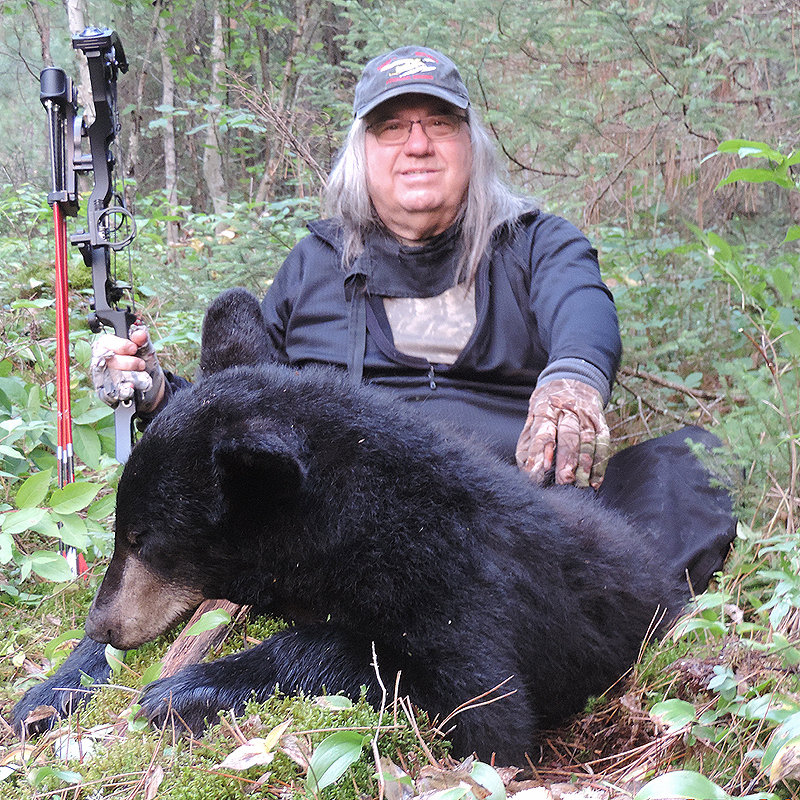 As the black object gradually moved through the dense Ontario woods I got my bow ready to go and waited for to see if the bear get closer. Limbs, some dead and some not, are scattered all around on the ground and most are hidden by the dense undergrowth. But if a bear wants to it can avoid stepping on the limbs and cracking them. That’s what the first bear had done. But not so with this one. Seemingly he didn’t want to pass a stick or limb without stepping on it … Crack. 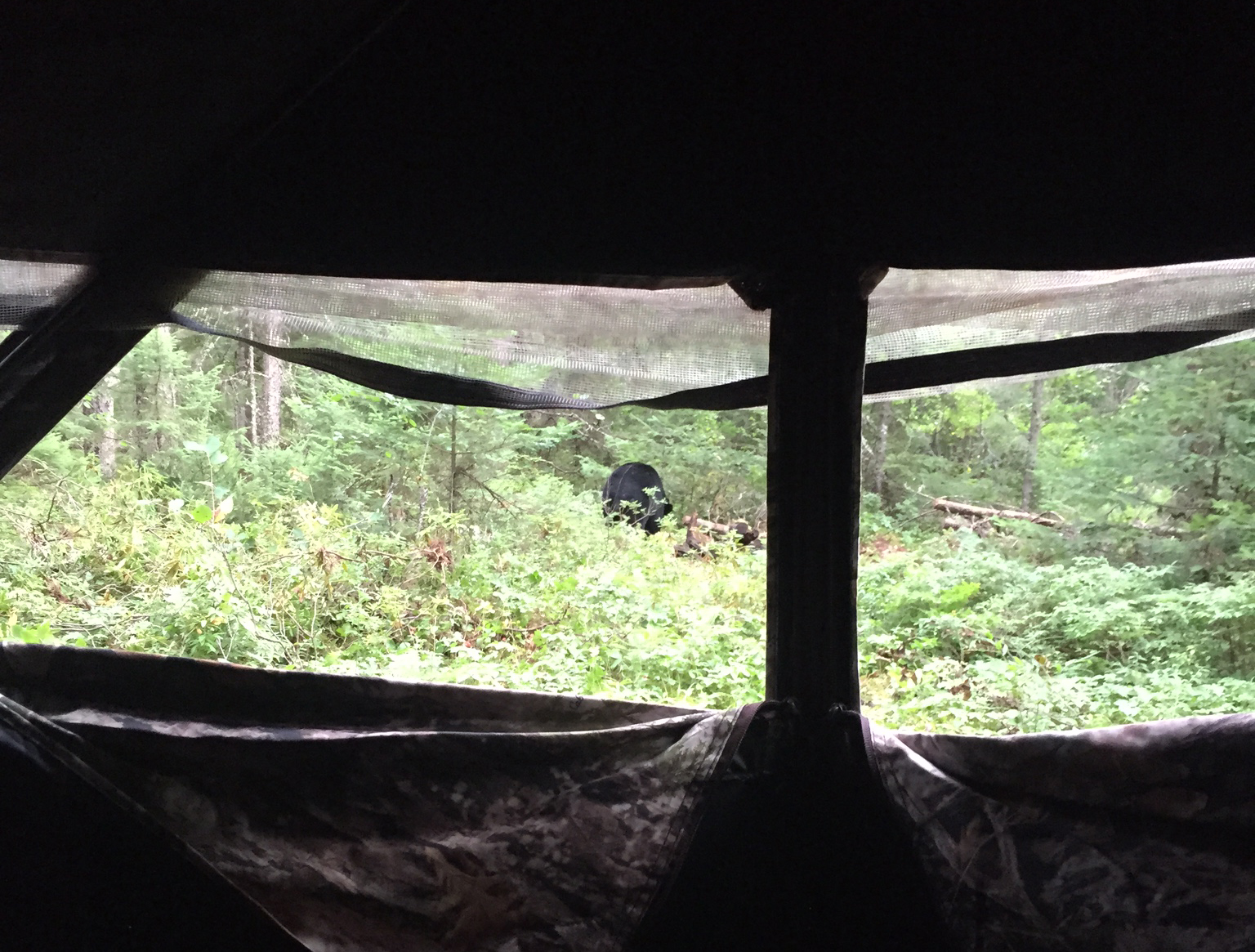 Gradually, the bear moved closer and soon he stopped behind the leaves of some sapling trees 12 yards to my left. He waited quietly, and so did I. 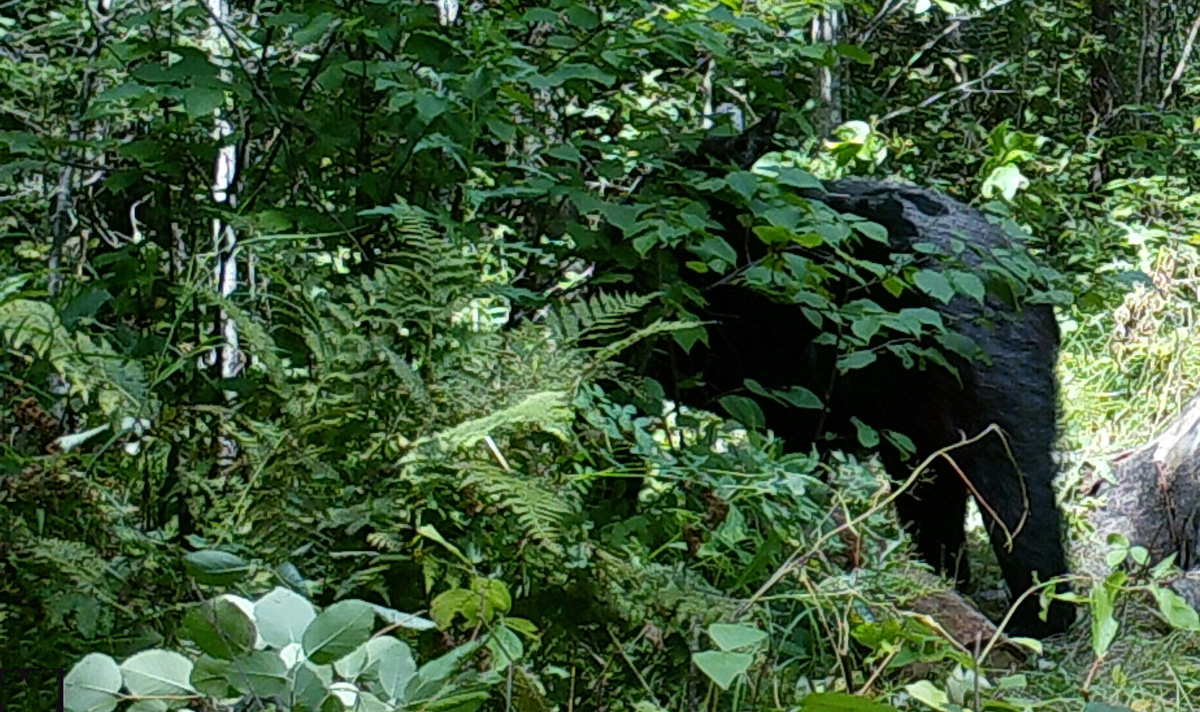 In due time the bear stepped away from the sapplings, out where I could see him better. He wasn’t as large as the bear that slipped up on us earlier. Now I had a decision to make, maybe the other bear would come back. Maybe he wouldn’t. 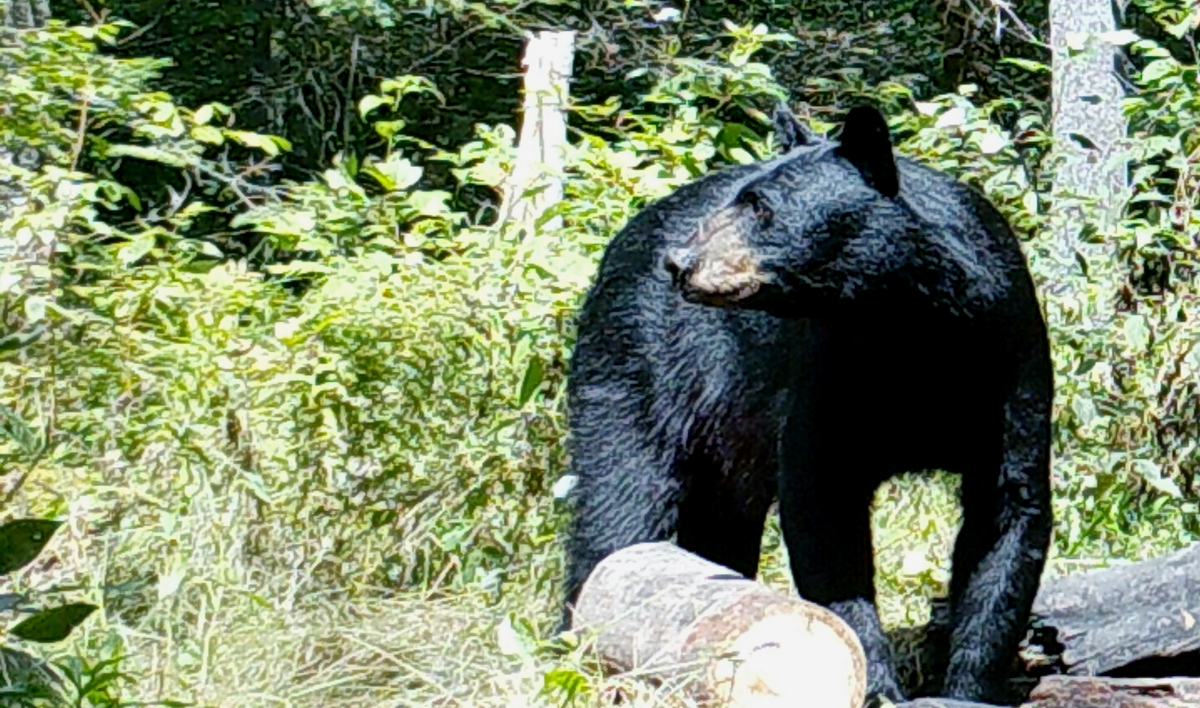 I decided to give it a little time, just in case the first bear returned. The current bear shoved and pulled the logs around and pawed out the bear goodies. I sat still, bow at the ready, and waited.

Soon the bear stepped away from the logs and walked behind some nearby trees. The shadows hung in the forest. Daylight was fading away. It was decision time. 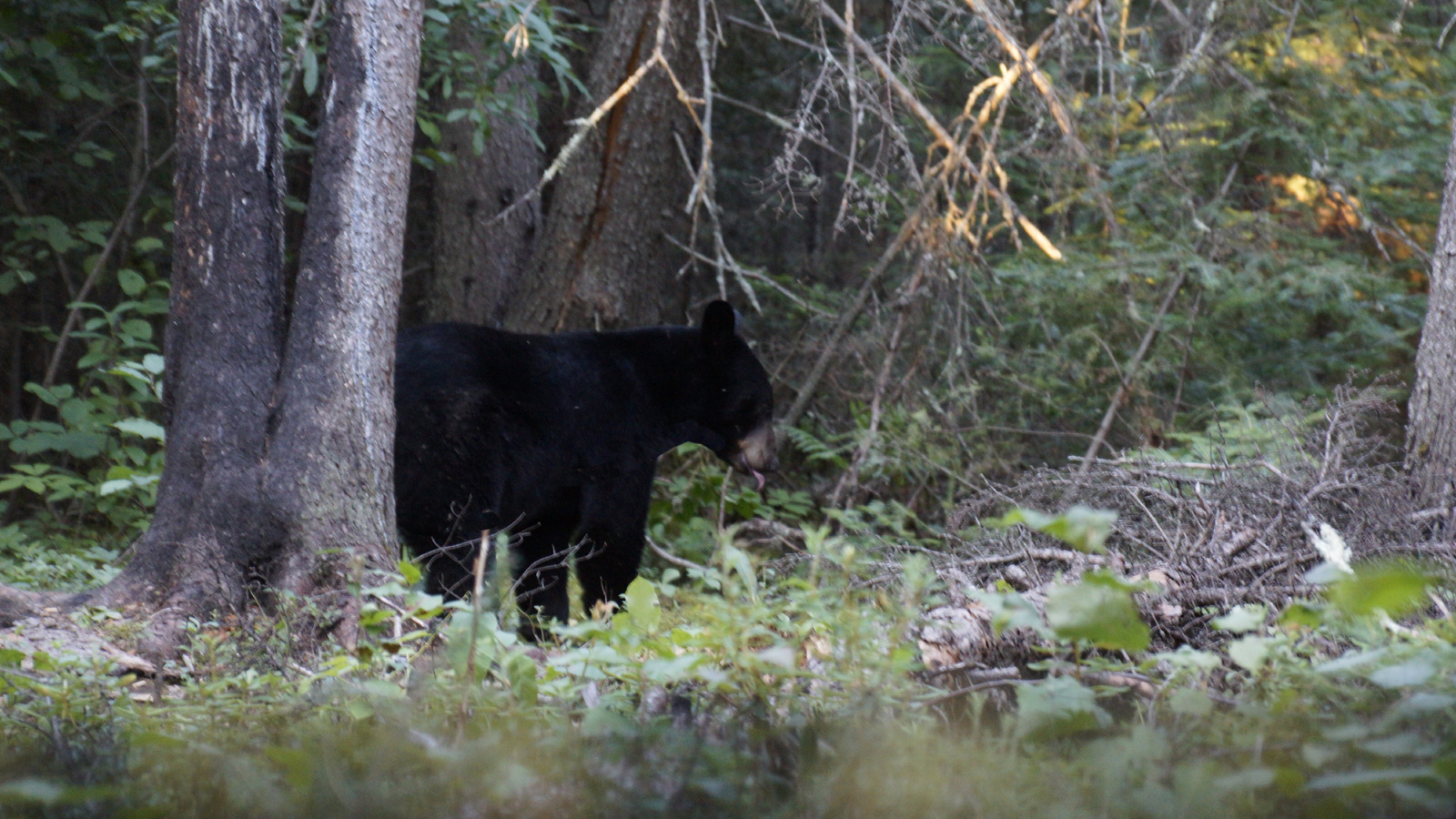 The bear did a 190 and stepped into the woods with his butt towards me. I drew and held, in case he turned left instead of walking straight away and leaving. 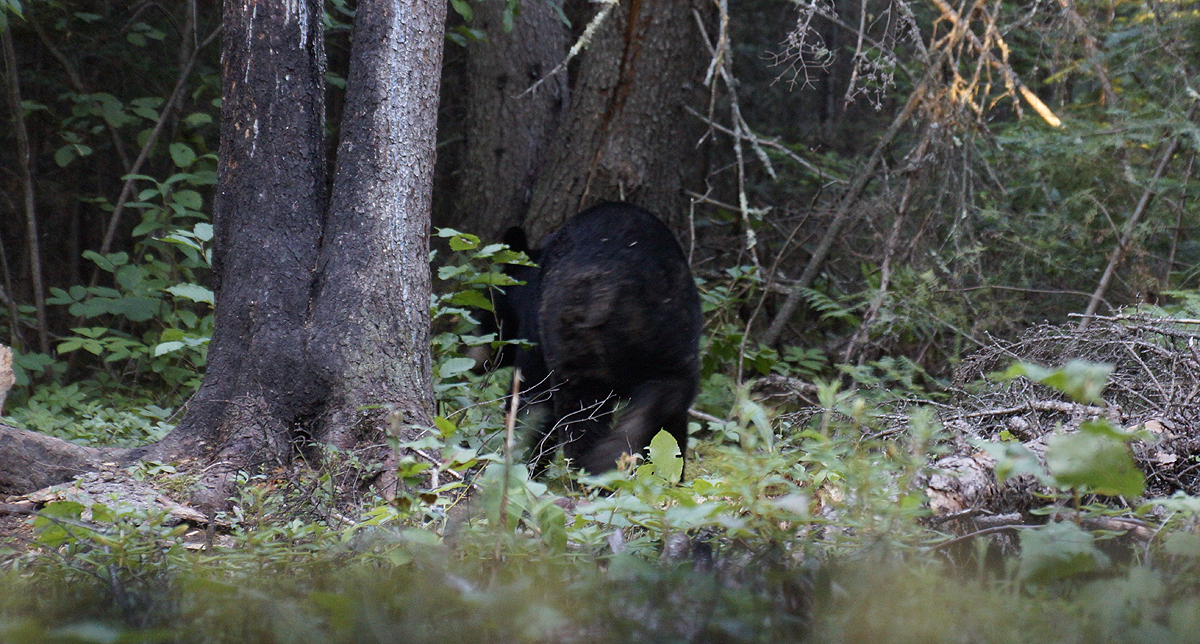 Good deal, the bear turned left, and was broadside. I put my top pin behind his front leg and released. My arrow popped through the bear and red spattered. He bounded 10 yards and I watched him drop.It was over. A minute later the Duck and I got out of the Double Bull and went to the bear and took a picture.

My Mathews Creed and Grim Reaper Whitetail Special had done the job again. 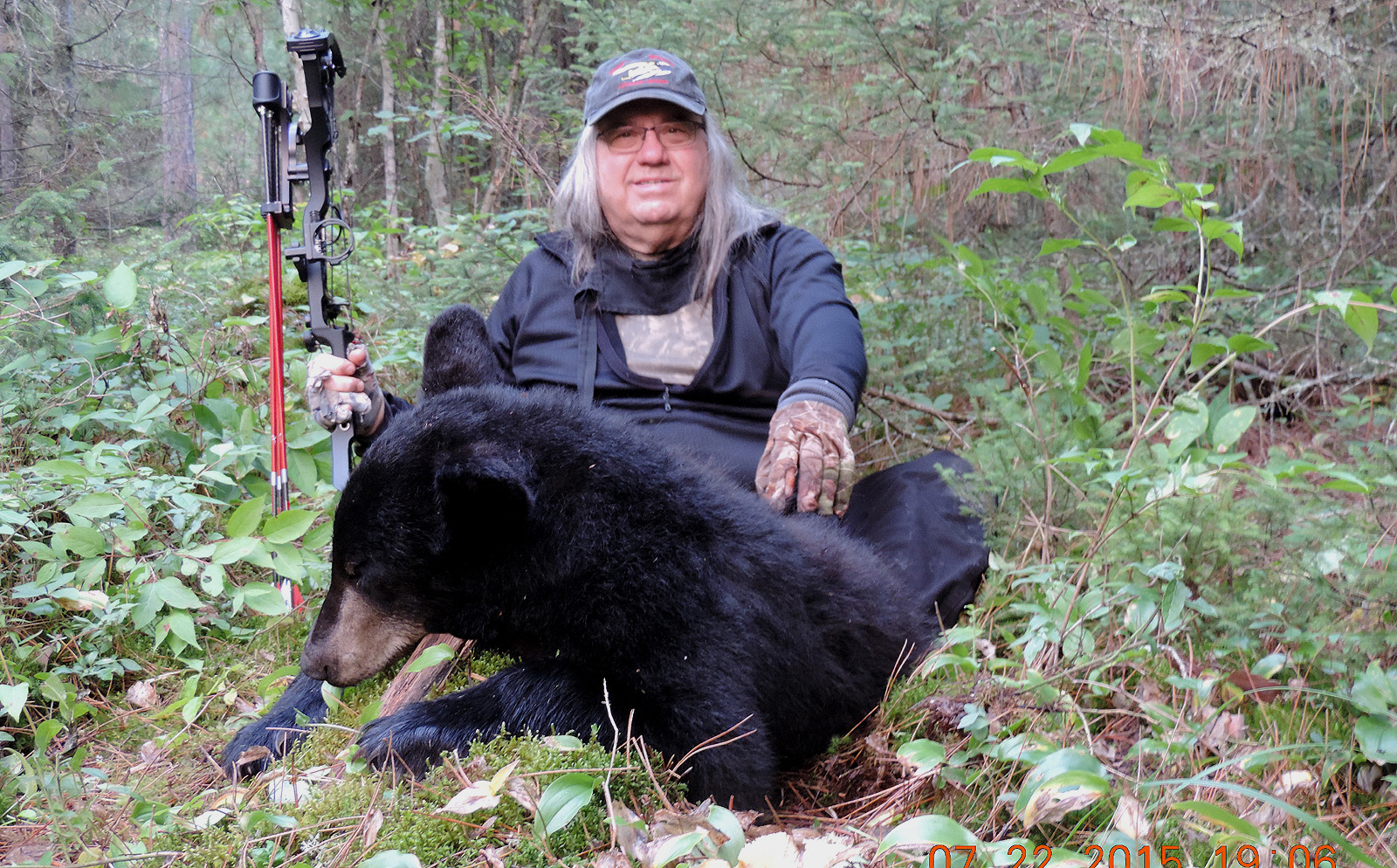 We loaded the bear in the truck and returned to camp. Kirby was frying lake trout and northern’s in his big grease cooker. We talked and joked and stayed up later than we should have, considering we needed to roll out early tomorrow.

As I listened to everyone I thought, “I’m really gonna miss doing this.”

In the morning Fred and I skinned my bear and wrapped the bear meat. Then we got in the truck and drove to Illinois. The last bearhunt was a wrap.

How To Make A Survival Bow and Arrows