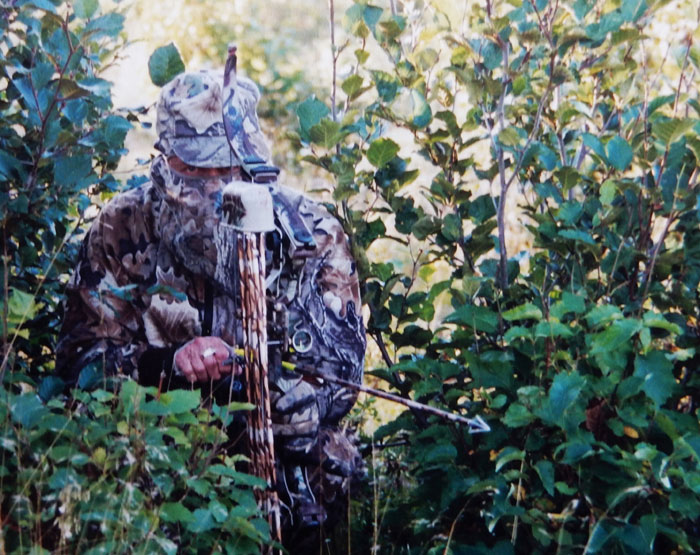 Movement by a camouflaged bowhunter in thick cover could be mistaken for a deer or other game animal. Target identification and picking a exact aiming spot on the animal’s body should prevent accidents. But the excitement of an adrenaline-laced moment of truth can cause lapses in judgment and the occasional tragic accident.

NORTHERN INDIANA BOWHUNTER Gary Howard died in the early morning darkness while walking to set up his portable treestand. It was late October and the time 6:05 a.m., a full hour before sunrise. Gary was dressed in camo and carrying his bow, with the stand strapped to his back. Incredibly, another hunter mistook Gary for a deer and shot an arrow through the heart at a distance of not quite 10 yards. Family and friends buried the 35-year-old bowhunter on Halloween day in 1986. Gary left behind a wife and four children.

Nearly a decade and half earlier, way back in October of 1972, a Hoosier bowhunter named Ron Fiesback, had been running late since his alarm went off. That’s why he was hurrying to his treestand in the half-light of a shadowy woods on private property, where he and hunting buddy, Dennis James, had permission to deer hunt. The two friends had just split up after agreeing to hunt until 9:00 a.m. before getting together again.

As Dennis climbed into his tree, Ron hustled off toward his stand maybe 100 yards away. But he hadn’t covered two dozen yards when he heard a “strange noise” and saw an arrow streaking toward him. A mere instant later the feathered shaft, tipped with a Bear Razorhead, sliced though Ron’s abdomen and rattled away into the dead leaves behind him.

“Dennis!” Ron screamed. “My God, somebody just shot me!”

SADLY, BOTH INCIDENTS ACTUALLY HAPPENED. Yet compared to Gary Howard, Ron Fiesback was the lucky one. He survived the severe injuries that nearly ended his life at age 27. But just how “lucky” was Ron? He lost five pints of blood in the woods and six inches of damaged intestine in an Indianapolis hospital’s operating room, when the cuts in his gut, liver, and diaphragm were surgically repaired. Of necessity, Ron was pumped full of antibiotics to combat the bacteria attacking his punctured large intestine.

All told, Ron spent five weeks in the hospital, losing a total of 30 pounds during a long, expensive, and painful recovery that prevented him from returning to his teaching job until the following August. Lucky? Sure, considering the fact Ron didn’t leave his wife Sandy a widow or their young son Kirk growing up without a father. Regardless, it was a terrible time.

The details of Ron’s “accident” are mind-boggling. For years afterward, Ron himself had difficulty believing what occurred. The young man who released that near-fatal arrow had actually shot at Ron and Dennis as they first moved past in the noisy leaves, believing the shadowy shapes he saw were whitetail deer. Only later, when Ron unknowingly walked closer after leaving Dennis, was he shot at the point-blank range of only 11 yards.

Wrap your mind around that fact for a moment. Try placing yourself in Ron’s boots and attempt to understand how such a “bowhunting accident” could possibly happen. Because the truth is if it happened to Ron Fiesback and Gary Howard, it could happen to you or me.

UNLIKE GARY AND RON, or the other bowhunters who’ve been accidentally killed or injured by other hunters’ arrows in past decades, I’ve never been shot or (to my knowledge) shot at. And thankfully that’s true for a vast majority of hunting archers who venture afield each season, following in the footsteps of the Thompson brothers, Chief Compton, Pope and Young, Fred Bear, and other pioneers of our great sport.

But again, one undeniable fact remains: It could happen again. Anytime. Almost anywhere.

I know I’ll never forget the pre-dawn day I slipped along a brushy Indiana fence line west of Fort Wayne — not all that many miles from where an arrow killed Gary Howard. I was heading toward a gnarly walnut tree containing my hang-on stand. It was still dark, but I was on private land and didn’t need a light to find my way along the familiar trail. Finally, when I was within 25 yards of the same tree I’d hunted the previous evening, I glanced up and froze, stunned by what I saw.

There, clearly silhouetted against a moonlit autumn sky, was the unmistakable shape of another hunter. He was sitting in my treestand.

An icy hand clutched at my chest as I gaped in disbelief. Immediately, the man lowered his bow and quickly climbed down. I heard him mumbling something about not thinking anyone was hunting this stand. Then he hurriedly headed off toward a neighboring farm.

I still wonder, “What if somehow this brazen trespasser had mistaken me for an approaching deer? What if this this jerk had ‘seen’ a deer instead of my human outline? What if an overwhelming desire to tag a deer made him ignore the importance of target identification, of picking an exact aiming spot, not to mention obeying state game laws that clearly define legal shooting hours?”

CALL ME AN OVERLY CAUTIOUS GIRLY-MAN if you choose, but that chilling encounter caused me to reach a sobering decision: I’d never again walk through darkness to or from a stand without holding or wearing a small light. My rationale? I believe even the most inexperienced, excitable, eager-beaver, brain-dead hunter knows that deer don’t use flashlights or headlamps to find their way through the woods.

Time was I carried a small flashlight. Then I used a miniature sportsmen’s light with interchangeable tinted lens (red was my usual choice), and later still the I toted the popular Mini-MagLites. Today I favor the compact but powerful push-button LED flashlights or strap-on headlamps. While they do help me negotiate darkened hunting terrain, their main purpose for me centers on safety.

In reflecting on his near-death experience, Ron Fiesback said that good ol’ common sense would have prevented his accident. And that’s true. Hunters should never shoot at any target they cannot clearly identify. Bowhunters also are taught to always pick an exact spot where their arrow will hit and to be aware of where an errant shaft may go in the event of a miss.. The young man who shot Ron confessed he’d shot at shadows, not once but twice!

And while Ron said he normally carried a light when approaching and leaving stands in low-light conditions, he’d not bothered that fateful morning. His reasoning? First, he was hunting posted property that he knew very well. Second, it was already getting light and a flashlight wasn’t really needed.

Regardless, Ron’s advice to every safety-conscious bowhunter makes perfect sense to me. I second his notions to: (1) Accept the very real possibility a nearby hunter will see or hear you as you walk to or from your stand, even on posted land, and (2) Always use a light coming and going, unless you need sunglasses to cut the sun’s daytime glare.

The truth is, a good light is the perfect complement to those common safety harness systems and fall-resistant lifelines now used by all savvy treestand hunters. “Better safe than sorry” may be a timeworn cliché, but taking common sense measures to be safe in the woods and fields can prevent injury or death. That’s one indisputable fact of hunting life!