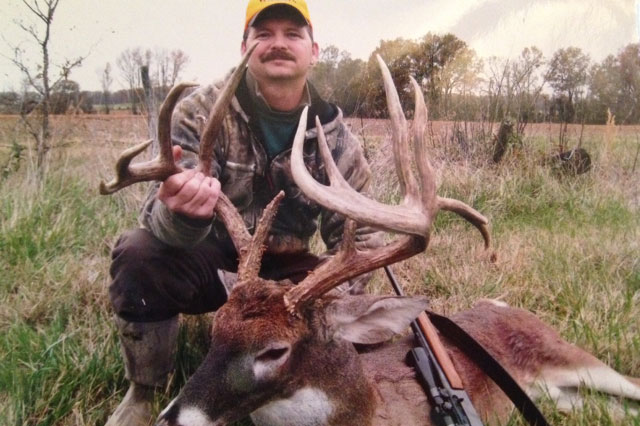 Every deer hunter’s dream is having quality private land for him and his family to hunt and manage. In many states, when you look for a big piece of property to lease, if that property has an abundance of deer and turkey, the lease price is outrageous. When longtime deer hunter Vic Thayer Jr., of Bartlett, Tennessee, started riding the roads and knocking on doors to locate hunting lands, he came upon one landowner who said, “I’ve got all my property leased, except the small 20 acres right behind my house. You’re welcome to go take a look and see if it’s a piece you may want to lease.” This point in time was when Vic Thayer’s deer-hunting strategies changed.

Thayer looked over the 20 acres and spotted several fence rows grown up with bushes that ran through a small woodlot. He found quite a bit of deer sign on this 20 acres that no one was hunting. So, Thayer leased the little 20 acres for $ 10 per acre in 2010. During the summer, he put up some tree stands in places where he thought he might be able to take a buck. Then he stayed out of the woods until the opening day of deer season.

“I only had been in the stand for 8 minutes before I saw a beautiful 8-point buck,” Thayer says. When the buck was within range, Thayer squeezed the trigger on his Remington Woodsmaster .30-06. He couldn’t believe he had taken a nice buck from a small property he’d never hunted before in the first 8 minutes of Tennessee’s 2010 deer season. This buck scored 132 points on Boone & Crockett.

Thayer continued to hunt this little 20 acres the rest of the season and saw quite a few bucks that would score 110 to 120 B& C, but passed on them. In 2011, he returned to his stand on the same 20 acres he’d leased the year before and took another nice 8-point buck that scored 138 points B& C.

After taking this buck, Thayer received a phone call from his 27-year-old son, Justin, who told him, “Dad, I’m coming up to the property to hunt with you this afternoon.” Thayer put his son on a point of woods close to a field. The next morning Thayer returned to his original stand on the 20 acres and took a 14-point buck that scored 168-7/ 8 B& C. A couple of weeks later, Justin went back to the property, sat in the stand where his dad had taken the 14 pointer and took an 8-pointer that scored 115 B& C. Justin, who never had taken very many deer, considered this 8-pointer a real trophy. In 2 years, Thayer and his son had taken four very-nice bucks, scoring 115 – 168-7/ 8 B& C, from this small 20-acre property. Thayer learned that this small tract of land was a funnel area between several large agricultural fields. Besides the fence rows, it had a number of ditches running through it that also were travel corridors that the deer used to get from field to field. 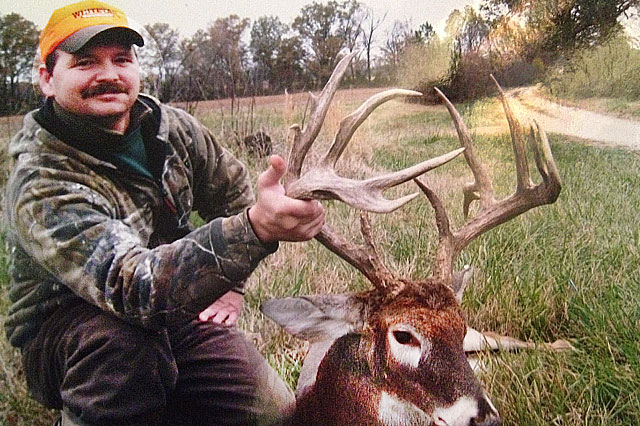 On opening morning of 2012, Justin Thayer missed a really-big buck that was running and chasing a doe. Justin admitted, “I just missed him.” Justin hunted the little 20 acres more than Vic in 2012. The 20 acres had plenty of buck sign. The banks of some of the ditches the deer traveled through were so heavily worn with deer tracks that the banks looked like someone had used a rotor tiller to go up and down these travel trails. According to Vic Thayer, “I saw more rubs and scrapes on that property that year than ever previously. You couldn’t walk 20 yards without seeing another scrape.”

Identifying that much buck sign on a small property like this would have had most of us putting out several trail cameras to see what size bucks were using the area. But Thayer wasn’t an advocate of trail cameras. “When you put out trail cameras, you have to go in and out of the woods to check them quite frequently. Once I see buck sign in an area, I believe the less you disturb those bucks, the greater your odds for taking a big buck. I prefer to stay away from these little small woodlots, until deer season arrives. Then, I only hunt them when the wind is right, and the conditions are in my favor to take an older-age-class buck.

“If you pinpoint the right small property like the one I’ve described, these will be small little woodlots that deer feel comfortable in during daylight hours. Too, funnel areas that deer use there to get into and out of big agricultural properties or ‘big woods’ where they’re probably hunted regularly will be present to keep the deer coming to these type properties. I believe the fewer times I hunt the little woodlots, the greater my odds will be for taking an older-age-class buck.”

Be sure to look for our next installment of Knowing The Wisdom of Hunting Small Properties with Vic Thayer, Jr. – The Second Small Hunting Area of 30 Acres.

To learn more about how to How to Hunt and Take Big Buck Deer on Small Properties click here http://amzn.to/1DwjO0H.

Be sure to bookmark this page so you can come back and read the rest of the story. 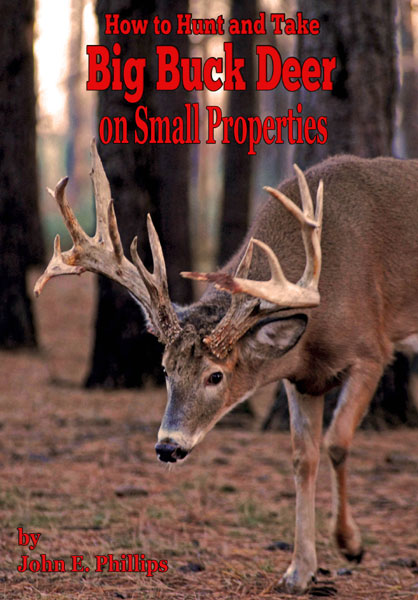 A Doe, a Deer, a Female Deer - Should you Shoot?