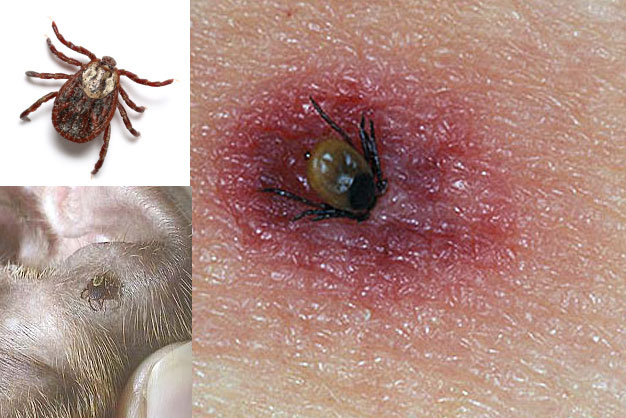 Whether on humans or animals like dogs, ticks can cause a huge problem.

Every spring, around this time, I write about tick diseases.  And every year the story gets worse.  At first I just wrote about Lyme disease.  And that is bad enough.  Lyme disease is a very bad disease that can lead to serious outcomes that are life-long.  You get Lyme disease from the blacklegged tick (but also recently found in Lone Star ticks too) whose range is the eastern half of the country, but especially eastern states.  I have at least ten bowhunting friends who have had Lyme or have had it in their family.  At least ten.

Then there is Rocky Mountain spotted fever, which has been around for many years.  Last year I wrote about several new tick diseases that are totally debilitating.  Anaplasmosis, Ehrlichiosis, Heartland Virus, and there are others.  Geez.  It gets crazier and crazier.  But if you were getting a bit leery about getting a tick attached to you while deer hunting, let me update you on a tick disease that was first found in 2009, and although still rare, it is becoming more common.  It’s called alpha-gal allergy, and it is a meat allergy.  When you get this stuff, you are allergic to meat.

You get this allergy from Lone Star ticks whose range was once just the South and Southeast, but is now found in most of the eastern half of the United States.  I won’t go into the complicated way that researchers made the connection between Lone Start tick bites and an allergy to meat, but it’s there.  The alpha-gal carbohydrate is found in the meat of all mammals except monkeys and humans.  If you get bit by the Lone Start tick, or a chigger, this carbohydrate transfers to you, and causes a development of a delayed allergic response triggered by eating mammalian meat products.  The more Lone Star tick bites you get the worse the reaction.  In fact some people get a reaction just eating foods that have touched meat.  Poultry and fish don’t trigger it, but mammalian meat does.  No more wild game for you if you get this disease.  Not beef, nor pork.  You’ve probably eaten your last hamburger and deer tenderloin, at least for a long time.

You get the disease when bitten by the infected tick and something in the saliva triggers you to produce antibodies against the alpha-gal carbohydrate molecules.  Why are some people more susceptible to a Lone Star tick bite?  Unknown, but the disease is more common in the South than other areas.  Probably because there are more Lone Star ticks there.  However, a 2012 study shows high rates of alpha-gal allergies in the western and North Central parts of the United States, and this suggests that this allergy may have connections to other tick species.

Here are the symptoms of the disease.  Four to six hours after eating mammalian meat you get an allergic reaction just as you might with other food allergies.  Skin rash, itching, hives, upset stomach, diarrhea, maybe anaphylactic shock as the antibodies in you attack the alpha-gal allergen. You may also suffer breathing problems.  There is the suggestion that fatty meats trigger this allergy more than other meats, but who knows?  In any case, this disease is serious and if you even suspect that you have it, then get tested right away.

Apparently if you do not get bitten again, antibody levels may decline and the allergy may go away.  But recovery may take years, if at all.  There is no cure.  The only sure thing is to not get bitten by a Lone Star tick.

When you are out in the field, use tick repellent or tick repellent clothes, especially in late spring and summer, but also in the fall.  High rubber boots help.  Tucking in your pant legs also helps.  When you come in from hunting, shower and do a body check for ticks.  Always.  Remove the tick as soon as possible because the longer it is attached, the worse things can get.  If you find a bite and a rash, you definitely need to see a doctor, but note that diagnosis of a specific tick disease can be difficult.
There’s my annual tick rant and now I feel better.  Ten years ago I didn’t know anyone that had alpha-gal allergy.  Today I know three bowhunters that do.  Take tick precautions.  If this stuff becomes common, it not only will be negative for you, it will scare hunters-to-be away as well.  We cannot afford to lose hunters, especially to a darn tick.  That would tick me off.  Really.

For more please go to: