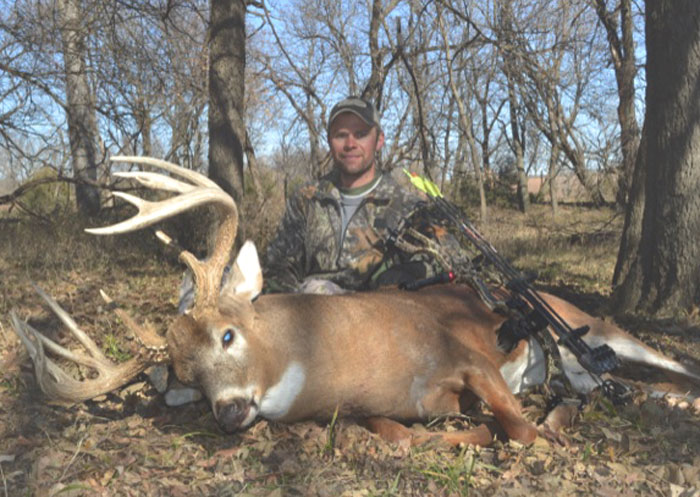 After a morning hunt on the first day, I am walking back to the truck.  The wind is blowing a steady 20 mph in my face and I thought to myself, this would be a great time to see a buck cruising by and get a chance at him.  Literally as I am finishing that thought I see white antlers bob over a hill heading toward me.  It was a scripted scene as those white tines contrasted against the red blustem under an ocean-blue sky.  Back to reality, this buck is heading right at me, dipping in and out of sight.  I drop to my knees and nock an arrow and ready myself as fast as I can.  Holding some type of Yoga position, with my knees on the ground, chest in dirt, an arrow nocked to my side I peek up to see this monster buck, oblivious to my presence, 20 yards and closing, coming directly at me!  All I can do now is hope he goes by and offers a shot.  He’s so close I can hear him letting out soft grunts as he’s moving.  Fifteen, ten, & down to five yards away, he suddenly spots me in my crouching pose.  He goes from fight, bristling every hair on his body (maybe thinking coyote), to fright in a second and turns bounding away.  His huge framed rack burning images in my mind.  This whole scene unraveled in a minute.  I could not believe what just happened.  If I had a few more seconds and got to full draw before he cleared into the open, I might have had a chance.  I knew that buck had to be in the top 3 biggest whitetails I had ever seen alive in the wild, a true Kansas giant.

I had 6 days to hunt and over the next few days I did not see much on that property.  I tried some other spots; saw quite a few does, fawns, and smaller bucks but no shooters.  Up to this point the weather had been warm, with highs 65-70 during mid-day.  However, a big cold front was coming.  The next morning was supposed to be about 20 degrees with sustained winds at 25-30 mph.  I did not think I could last staying warm in a tree-saddle until 12:00 in that cold and wind, so I opted to sit on the ground.

On my last day to hunt it was 5:30 am; I’m in the dark – literally and figuratively, on where to sit.  I knew the deer trails and the area I thought the big buck would come from and the wind direction was good.  I started building my small “fort” next to a big downed tree.  Once I had some logs piled up for a good back drop and felt somewhat concealed I broke a few strategic branches to help offer a clear shot.  Luckily in this area there was not a lot of under-brush and a clear shot could be had out to 50 yards in a couple directions.

I hunkered with many layers of clothing, toe warmers, hand warmers and even body warmers down my back.  I even had an extra jacket over my knees, yet the cold wind still seemed to cut through me.  At 7:15 am I slowly stood up to look around.  After a few cold, windy moments, I turned my head to see a lone doe 50 yards away staring directly at me.  You just can’t get away with any movement – that’s the big negative of sitting on the ground.  However, it was so windy that she let it go and moved on.  Then from a scene in a hunter’s dream, I heard a loud grunt cut through the wind and the giant buck appeared.  Head back, lip curling, sniffing around like a bird dog, …this is what we trained for… this is the rut in Kansas!

As great as that scene was, I had to snap back to reality.  This buck was like a shorthair pointer on a bird and not stopping.  I grunted and doe bleated but with the wind I didn’t think he could hear it.  Plus his mind was preoccupied with that doe.  The buck snaked by at 50 yards – no shot.  Letting that soak in for 15 minutes and not seeing anything, I analyze where my shot could have been.  I needed to break two more branches to even have a chance and even then it wouldn’t be perfect.  I break the branches and then stare in the direction the buck and doe had exited.

At 10:15 am; reality sets in, I should be getting on the road soon.  This is the last day I can hunt and  I think back to a phrase I recently heard:  A farmer can prepare the ground, fertilize and plant the best seed but God’s got to make it rain.  I’m hunting in a good spot, there is likely the biggest buck I’ve ever shot nearby, I’m confident that doe will come back this way with the buck in tow but he has to give me a shot.  I will stay here until dark, I’ll get home at 3 am, whatever it takes; but deep down I know it still won’t happen without a little “rain”.  Win, lose, or draw I’ll take away some great memories and images I won’t forget.

Fifteen minutes later a yearling buck materializes in front of me.  He is motionless starring into the woods.  We stare together in that direction.  I see nothing.  What does he see?  A flicker of an ear, a little motion? Seconds later the doe and big buck are making their way back toward me.  The big buck swings out in the open within 30 yards, but he is on the side of my makeshift blind to which I cannot shoot.  He fades back into the brush.

A few moments later the doe appears leading the buck toward a shooting lane.  This could be it; I really could get a shot at this buck!  I don’t remember feeling overly nervous, just trying to focus on making a good shot.  I’m going to need to stop him because he’s moving quickly in spurts, dogging this doe.  He jogs into the lane and I make the “maaaah” doe bleat sound with my mouth.  He barely hears it in the wind, but throws his head up and looks in my direction.  I had ranged a tree near him at 42 yards; I’m trying to float this pin to the right spot.  Heavy clothes, cold weather, big buck… squeeze it… the arrow sails an inch below his brisket!  A clean miss!  I can’t believe it!  This is where the windy conditions are in my favor.  The big buck really only cares about what the hot doe is doing.

The doe has no idea an arrow was in the air and with the wind the buck barely moved.  He’s between 45-50 yards now, wind howling. I nock another arrow and come to full draw, settle in… the shot goes off, …but the arrow deflects wildly off an overhanging branch!  (Remember I set this up in the dark and didn’t have time to clear good shooting lanes – and am paying for it now!)  While am doing everything I possibly can to scare this buck into the next county, the wind is still howling and neither deer was sure what was going on.

I’ve got one arrow left, it’s truly the bottom of the ninth, full count, whatever you want to call it… but it was definitely crunch time.  Believe it or not, the doe turns and comes back through the shooting lane. The buck was a little nervous but not wanting to let this beauty get away, he follows her.  “Maaah”, I stop him.  This time just far enough to the right of the overhanging branch.  I pay close attention to his position and know he is just behind a green clump of grass I previously ranged at 30 yards.  I’m really confident he’s standing at about 35 yards, slightly quartering to me.  With all my mental fortitude I try to bury that 30-yard pin just above his heart and do the best slow trigger squeeze I can…  Heavy clothes, face mask, strong winds, cold, sitting on the ground, two arrows already gone, on a big buck, don’t rush it …make this count, just a little rain… is it in the cards… it is!

The arrow buried to the fletching exactly where I wanted it!  He didn’t go 40 yards and was at rest in less than 5 seconds.  Unbelievable!  I still can’t believe it happened and unfolded that way.  What could have been over the first day turned into a mental and physical 6-day battle that makes this trophy even sweeter.

Like anything in life, find a worthy goal, never give up, put in the time, expect difficulties, expect success, but please don’t for get to pray for “rain”.

Be a Star With the Liberty Star Hose Butler

Be a Star With the Liberty Star Hose Butler

Step up Your Game with Bloodsport Crossbow Arrows