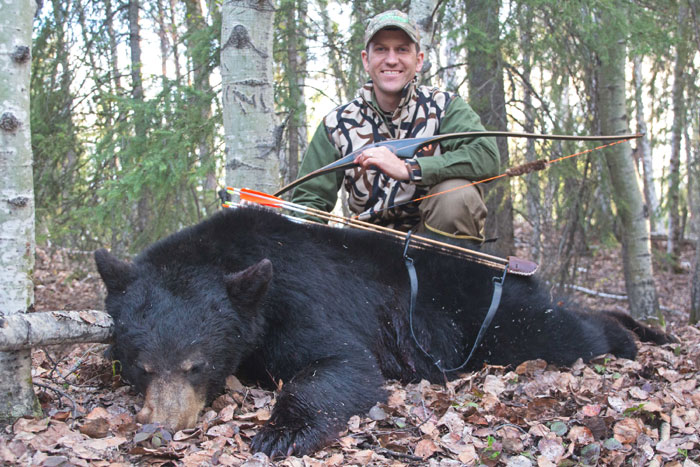 The author with an Alberta black bear killed on May 24th with a hybrid longbow.

10 Mistakes you don’t want to make during the spring 2016 bear season.

I hear a lot of negative murmur about mosquitoes on spring bear hunts. Mosquitoes are like a vaccinatable disease – if you get vaccinated you don’t have anything to worry about but if you don’t, they’ll make you miserable.  There will definitely be mosquitoes in large numbers wherever you spring bear hunt but with the advent of modern technology they really aren’t a problem anymore. I carry two ThermaCELLs with me everywhere I go in the northwoods. They virtually eradicate mosquito problems. Bring plenty of refill cartridges and you should be fine. Eight to ten pads and 5-6 propane refills usually works for a week-long hunt.

Often, the number one of objective of a spring bear hunt is to simply bring home a bear. The first bear you see, however, will most likely be a juvenile bear. You can shoot that bear and have the rest of the week to relax at camp, but why not wait for a more mature bear that will achieve more of the management goals of the region and make you happier in the long run? Don’t shoot the first bear you see. Take the chance that you’ll get another opportunity on the trip. You probably will.

Spend the extra money and go with the outfitter that you feel most comfortable with. Human-to-human communication is the time honored, most trusted form of communication. Call numerous outfitters, ask them DETAILED questions about their hunt and go with your gut. If you base your hunt solely on economics, you may be disappointed. However, don’t let a cheap price fool you. Some outfitters offer quality hunts at cheaper rates. Often times this has to do with the region of the country they are in and their personal goals in outfitting. Go with your gut after you’ve talked to the outfitter. My biggest black bear to date was killed on a “cheap” hunt.

Everyone has a different standard regarding what a target bear is, whether it’s a DYI or guided hunt. Use clear guidelines to define what you’ll pull the trigger on or you’ll be subject to an emotion-based decision on stand. Shooting a non-target animal always carries a negative feeling and you don’t want that. Examples would be – “I will only shoot a bear whose back is midway and above the second ring of the barrel.” Or “I’m only shooting an adult male.” Brush up on bear judging techniques before you go.

Springtime yields the best hides of the year for bear. The later you go into the spring, however, the bigger chance a bear’s hide will be rubbed. A rubbed hide will look multicolored and patchy. Do your best to look at all sides of the bear before shooting, because sometimes one place on the hide can be rubbed, reducing the quality. If you give the bear a little time, he’ll usually show you all his sides. A mount can hide some rubs, but a rug cannot.

As a publisher, the level of tolerance for poor quality photos surprises me for people going on a once-in-a-lifetime bear hunt. Don’t EVER trust your phone to take a good photo, regardless of how many pixels it is. Buy a decent point-and-shoot camera. If nothing else, put the camera on automatic mode, make sure the focus is clear and shoot numerous photos from numerous angles. Make sure the bear is a good position to see most of its body, reduce the amount of blood visible, wear hunting clothes for authenticity, have your weapon in the photo and SMILE. Make sure all important parts of the picture are in the frame, i.e. your head, your gun, the whole bear, etc. FOCUS is key.

There is much debate about the necessity of playing the wind when bear hunting over bait. On some wilderness hunts, bears are more tolerant of human scent because they haven’t developed a normal fear of humans. However, in most regions of the bears range, adult bears are afraid of humans and like to avoid them at all cost. If your scent is blowing into the areas from which the bears are coming, your chance of seeing the BIGGEST bear on the bait is dramatically reduced. Some will say that wind isn’t critical, but I would choose the stand with a good wind over a one that’s dead wrong.

I hear tales of bear hunters not sitting until dark, but rather leaving stand in time to get back to camp before it gets too late. CRAZY! Just like in most types of hunting, “just before dark” is usually the best time for the mature animals to arrive. Sometimes the big ones will be there well before dark, but usually the last 30 minutes of legal shooting light is the best. Carry a flashlight; the bears usually won’t eat you. They are just as afraid of you after dark as they are in the daylight.

Perhaps the ultimate hunting mistake is executing a poor shot on an animal. There is nothing worse than coming home from a spring bear hunt empty-handed because of a lost opportunity. When a bear comes to a barrel, most of the time he is going to stick around for a while. The worst thing you can do is rush the shot. A bear can twist, turn, sit down and lay down when in range, offering a wide range of poor shot opportunities. Only take broadside or slightly quartering shots when the bear is standing on all four legs. Don’t aim too low or too far forward. The vitals of a bear are narrow towards the front but extend farther back than a whitetail deer. A bear’s lungs reach all the way back to the third to last rib. The best shot is a double lung, not a heart shot. Additionally, take into consideration the length of a spring bruin’s hair. He’s not as big as he looks. Hunters trying to sneak in a low-heart shot like on a whitetail have shot many bears too low.

Perhaps the biggest mistake you could make is not going on a spring bear hunt in 2015. You’ve still got time to plan and many outfitters still have openings. Outfitted or DIY bear hunts in the spring are extremely exciting and are a great way to spend a time otherwise devoid of big game hunting action. Be sure to check out the top outfitters in the North American on our “go hunting” page on www.bear-hunting.com and in this issue.

For more also go to: The Bear Hunter