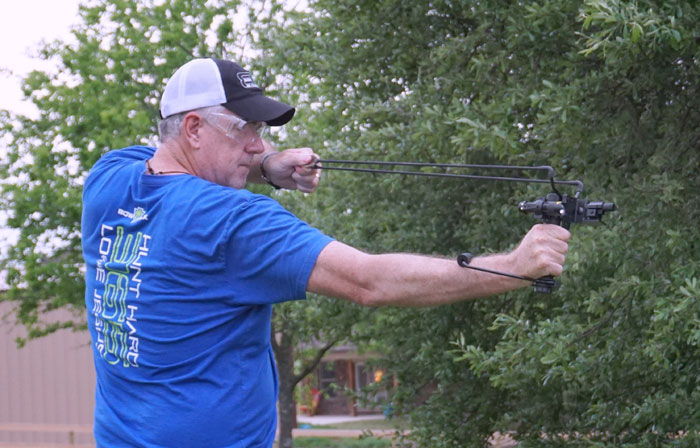 One of the perks of writing in the outdoor industry is you get to try out really cool stuff. Survival Slingshot definitely fits in the “cool stuff” category and I could not wait to get my hands on it. From the time you open the box you realize this slingshot is more than just “cool stuff.” I served in the Army for eight years, and everything about this “slingshot” is military grade. After handling it for a bit, I knew I needed to learn more about this company named Survival Slingshot and how they make this thing. It turns out the Survival Slingshot was invented by an aerospace engineer using 3D CAD software and 3D printers. The slingshot is constructed of a cast aluminum allow handle, steel yoke, and power bands available in different draw weights. His design was inspired by the AR-15, which explains the over the top spec’s used to build the Survival Slingshot.

Even the directions to put the slingshot together are over the top. Plainly written, easy to read, with color pictures, who does that? Even if you don’t use the directions, the assembly is quick and easy. The package I reviewed was the Survival Slingshot Ultimate with Laser Sight.  This package will shoot either ball bearings or arrows and includes the slingshot, ammo, survival kit, compass, flashlight, laser pointer, and Whisker Biscuit attachments. The laser pointer comes with windage and elevation adjustments for added accuracy. The flashlight attachment has three settings; two for brightness and a strobe setting. The survival kit is a Rambo-like bag with fish hooks, line, sinkers, and safety pins all stored in the handle with a built in compass. There are several configurations to choose from with the Ultimate package depending on the ammo you want to shoot. The first  configuration is for shooting ball bearings and includes a laser pointer, flashlight, a compass, survival kit, and ammo. The second configuration adds a Whisker Biscuit arrow rest. No need for ball bearings with the second configuration; this thing will shoot a frigging arrow! Again I say, who does this? Awesome!

To test the Survival Slingshot with ball bearing ammo, I used a Hips Archery Herd Bull target. It stops my 60 pound pull Hoyt Nitrum with Easton Injexion arrows with about 6 to 8-inch penetration at 20 yards. I wanted to see what the Survival Slingshot could do on a premium archery target. This slingshot configuration would consist of slingshot with the survival kit, laser pointer, and flashlight. My first shot was from 10 yards. With the laser pointer dead center of the Hips target, I pulled straight back keeping the laser pointer on target and let loose. My first shot hit high right, but jeez the penetration! The ball bearing buried 3 inches into the target. For someone who doesn’t know how to shoot Rambo’s slingshot, I was impressed. I took more shots adjusting the laser pointer and learning how to properly shoot the slingshot. It only takes a few shots and you are accurate, but it’s fun to keep tweaking. Keep in mind if you zero your laser pointer at 10 yards, you will have to compensate as you increase your distance. Beware: shooting this is addictive. Make sure your buddies bring their own ammo!

Next, I added the Whisker Biscuit assembly to the handle in order to shoot arrows. Assembly was quick and easy; I was shocked they use actual scope mounts to install the additional add-ons like flashlights, laser pointers, and arrow rests. There is even a different yoke you can add that has a bow string instead of the slingshot tubes. The bow string yoke actually has a string loop so you can use an arrow release. Survival Slingshot even has a bow fishing rig on their website now. Perfect for when you can see the fish, but they just won’t bite! My test used a Whisker Biscuit arrow rest and the sling shot tubes used for a ball bearing as a bow string. It is harder to seat the arrow in the tubes/leather strip than a ball bearing, but I easily hit the target at 10 yards from the start. I was actually more accurate with the arrow than the ball bearing. With a heavy Easton Carbon Aeros 400 at 8.1 gpi and 27 inches long, hitting the target at ten yards was easy.  Make sure to get all your shots in before your friends and family see you shooting; you will have to fight for shooting time! 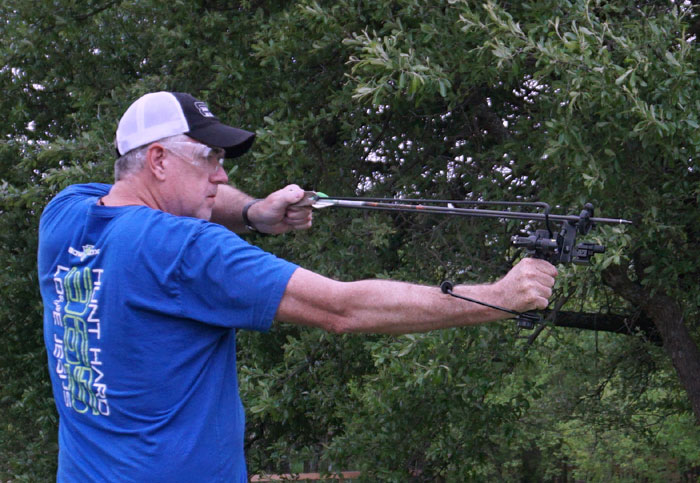 I have to admit I originally thought the Survival Slingshot was more a novelty than an actual weapon.  From the first time you take this out of the box, you realize it is for real. This is not a toy you give a kid! The estimated range on the ball bearing is 250 yards, and it will do every bit of it. If you add an arrow/broad head to this you will kill something. My opinion is this definitely measures up to the marketing material. My only problem with the Survival Slingshot is it is a blast to shoot and I burned through my ammo! In summary, whether you are a serious backpacker or the hunter who has everything, you can’t go wrong with the Survival Slingshot. It is a lot of fun to shoot and a comfort to know you have it in your back-pack.