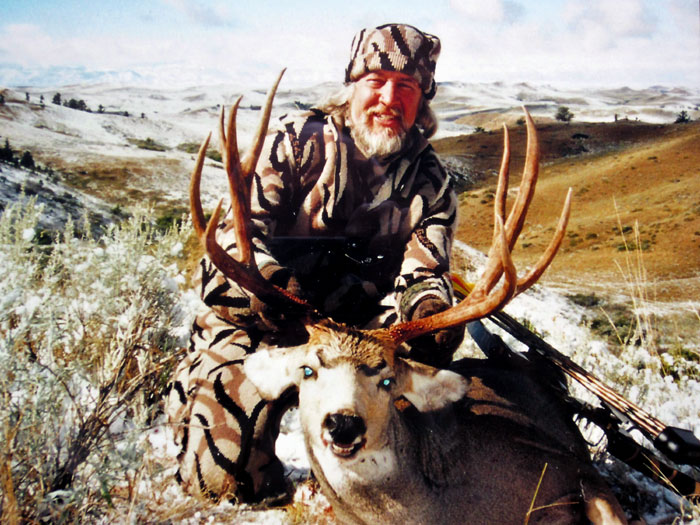 Back in the late 1960s, I blew a point-blank shot at a nice muley with a pair of hunting pals watching. Rather than pouting, I learned from my mistakes and worked to make sure it didn’t happen regularly. I’ve tagged lots of mule deer since, including this Wyoming buck that I stalked and shot at about 20 yards on the open prairie near Sheridan.

THE THREE OF US were gathered at the end of a spotty blood trail where the Utah muley had finally folded in a sun-splotched aspen grove. Amid the wide grins and happy handshakes, the bowhunter whose arrow had made our impromptu celebration possible suddenly glanced up and pointed. “Buck!” was all he said. And sure enough, for reasons known only to the mule deer and the Good Lord, a decent-sized 4×4 buck was bounding downhill directly toward where we stood over what may have been his twin or at least some distant cousin.

Never one to look a gift horse or mule deer buck in the mouth, I somehow managed to recover first. I yanked an arrow from my bow quiver, nocked it and raised my recurve just as the muley finally spotted us and skidded to a stop. Unbelievably, he turned and posed broadside only 20 short yards away. Quickly reaching full draw, I instinctively focused on his heart-lung vitals, held for a second, and released.

Sad story short, the cedar shaft sailed just under his chest. I’d missed. In front of witnesses. Where was a handy gopher hole to crawl into when I needed one?

THAT EMBARRASSING MOMENT happened nearly 50 years ago. But it’s forever burned into my mind’s eye, along with a closet full of skeletons from similar blown shots that left me chagrined and humbled. Admittedly, the ribbing I took from hunting buddies stung, but my own mental butt-kicking and self-flagellation hurt my pride even more. In fact, it took me a good many hunting seasons – and more errant arrows – to reach the realization that I’m not the only hunter to miss.

The fact is, any hunter claiming he or she has never blown a gimme shot at a big game animal has either not shot at many animals or is flat-out lying. Truth be told, it happens to everyone sooner or later. Believe it!

Who can forget watching the vintage footage of the legendary Fred Bear stalking and missing an easy shot at a standing grizzly bear, then promptly fling his bow into a bush in frustration? (Posted today on bowhunting.net) Classic moment! And I’ve personally watched a good many other bowhunting “icons” and big name TV personalities do the same, though I admit not many threw their bows afterward.

Want more proof that even the best blow shots? I’ve had three different U.S. Olympic archery gold and silver medal-winners confess they’d missed broadside shots at deer standing 20 to 25 yards away. Blame “buck fever” or misjudging yardages, some unseen twig or arrow-deflecting leaf that went unnoticed. Whatever the cause, misses happen from time to time. Deal with them. Learn from them.

All consistently successful archers and bowhunters understand the importance of focus, shooting form, and proper practice. None ever releases an arrow expecting to miss, yet it happens for a myriad of reasons. Judging from my own frustrating experiences, I’ve found most result from mental lapses, commonly known as brain farts. For decades I’ve written that once the basic fundamentals of shooting a bow are mastered and practiced, archery and bowhunting are at least 90% mental and maybe 10% physical. Learn to master the mind, Grasshopper, and your misses will be fewer and farther between.

A FEW SEASONS AGO in Illinois I watched a Boone and Crockett-class whitetail buck chase a hot doe past my climbing stand several times. He was one of the largest trophy bucks I’ve seen anywhere in more than half a century of chasing whitetails across much of North America. Admittedly, my heart was pounding like a jackhammer each time he trotted past, mouth open, tongue lolling as that ol’ doe played hard to get. Never quite offering me an ideal stationary shot, the giant buck finally paused just to my left at only 18 yards.

I carefully drew but couldn’t risk releasing. He was slightly quartering toward me and the shot angle much steeper than I like for a lethal double-lung hit. Even worse, one massive beam with six long, thick tines partly shielded his vitals. So I held. And held. And held some more. My bow arm began to burn. Then tremble.

Fortunately, the hot doe circled back his way. He tensed and shifted slightly, turning his head to watch his girlfriend. My arrow finally flashed away. Unfortunately, there was an immediate crack! as broadhead smacked antler beam and remnants of the shattered carbon shaft flew just over his broad back. And when I finally found my broken arrow, both its nock and screw-in broadhead (including the insert) were missing. My sole consolation was knowing I hadn’t drawn blood or injured the magnificent whitetail, only enhanced the education of an already hunt-wise trophy whitetail.

I never saw that old warrior again. No surprise there, but I couldn’t help hoping. And I also hoped I’d at least get word of some successful hunter on an adjoining farm report killing a giant deer with a broadhead buried in his heavy beam. Did I ever have a near-miss tale to share!

Sponsored by:  The Archery Hall of Fame & PCBA and…