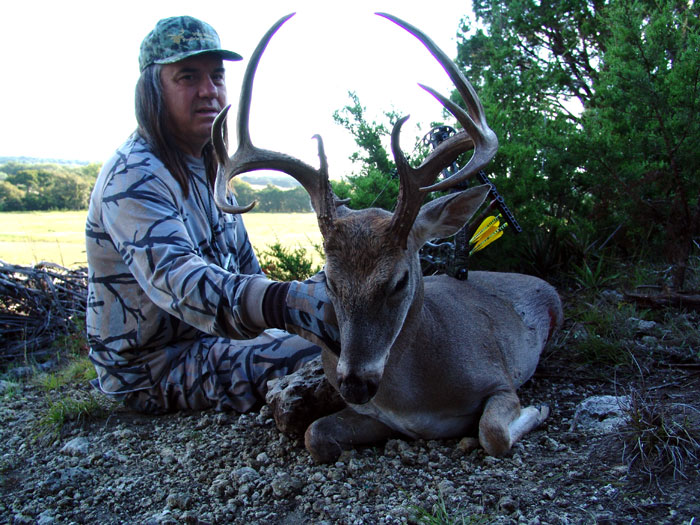 Robert Hoague managed to catch up with this buck by being persistent. Bucks this age are the travelers and had to dodge a lot of hunters to end up in Hoague's hero pic.

Researchers are learning more about buck movements due to new GPS Tracking collars. Just as the invention of the telescope opened up our eyes to the scope of the universe, this new technology is revealing secrets about whitetail movement, secrets that biologists never even dreamed. While at the S. E. Deer Study Group meeting in Athens Georgia recently I was privy to some new research findings that are opening up new discussion on buck movement patterns. This is information I want to share with hunters.

In contrast to does, bucks begin to travel when only 1.5 years old due to maternal doe enforced buck dispersal. This stirs the gene pool. In northern Pa, one study learned that these yearling bucks were moving up to 5-miles to establish a new HR. In the more patchwork agriculture regions of southern Pa, it was 15 miles. In one study in heavily farmed Illinois, buck dispersal averaged an amazing 25-miles.

Bucks do cruise. This winter at the South East Deer meeting in Georgia I heard a research paper given that really mixed up the knowledge base on what we believed on buck movements. The research was conducted in three study areas with 37 GPS collared bucks. The areas stretched from north-central Pennsylvania to the Piedmont region of Georgia to the Mississippi River flood plain of Louisiana.

Steering the research was Dr. Carl Miller, his longtime friend David Stone from the Warnell School of Forestry and Natural Resources. During the study, nearly half of the mature bucks left his home range boundaries for between 12-hours and 11-days. Now for the interesting part. This study showed that they did this traveling between mid-February and mid June…not during peak rut. Go figure. A bucks fidelity to his home range is not a given. Bucks are cruisers.  GPS collars are revealing new secrets about whitetails.