Dr. Burkenstock’s ‘That Itch Stuff’ – Be Itch Free and Enjoy the Outdoors

by Aaron McCaleb
in Bowhunting Posts
0 0
A A
1 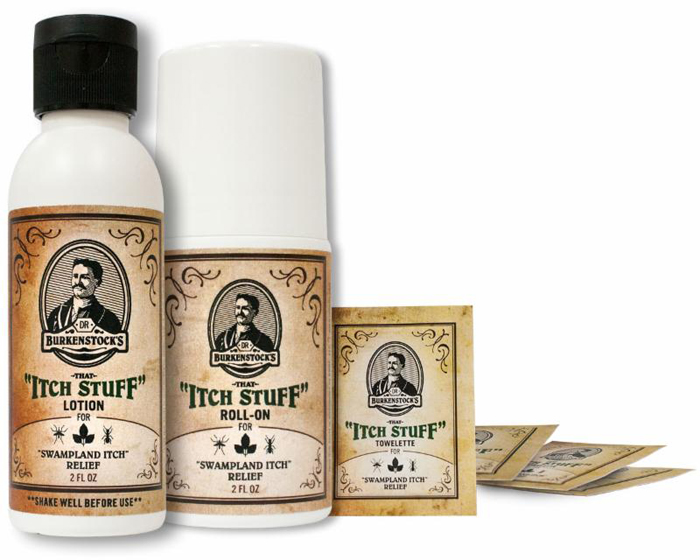 There are a number of reasons why anglers, hunters and campers don’t get out in the woods and water as much as they’d like. Whether it’s work, chores or school events for the kids, with summer vacation just around the corner, it’s important to enjoy every sunny day outside.

That’s exactly why you should bring Dr. Burkenstock’s, That Itch Stuff with you every time you go fishing, camping or hiking. That Itch Stuff is a lotion designed to provide relief to irritated skin from insect bites, poison oak, ivy or sumac. It even works on chigger bites.

For example, if untreated, the itching caused by poison ivy can make it almost impossible to enjoy the outdoors. Come prepared. A handy supply of Dr. Burkenstock’s That Itch Stuff can save the day safely and effectively, providing an end to itching without any mess or odor. When you think about having fun outdoors, think That Itch Stuff for effortless, lasting protection.

Despite its unusual name, That Itch Stuff has a long history of soothing irritation caused by insects and poison plants. It was originally developed in the first half of the Twentieth Century by Dr. Burkenstock, a Louisiana pharmacist who loved fishing and exploring deep in the swamps. Louisiana swamps, however, are full of bugs and plants that irritate skin. Skin rashes and insect bites were driving him out of the swamp he loved.

Burkenstock put his knowledge of chemistry to use to develop an anti-itch medication which he perfected in his pharmacy lab over time. Word spread among his customers who began to come into his pharmacy asking for That Itch Stuff, so Dr. Burkenstock decided to brand the product under the same name his customers grew to love. Three generations of Burkenstock pharmacists later, That Itch Stuff is still the same powerful and effective skin cream that customers know and trust.

That Itch Stuff comes in a variety of applications. As a cream, roll-on or handy wipes, That Itch Stuff can be stored in a tackle box or a pack pocket until needed. No mess, no smell, no itch.

This spring, before you go into the wild, pack That Itch Stuff ahead of time. Because fishin’ is more fun than itchin’.

In addition to That Itch Stuff, Dr. Burkenstock offers a wide variety of products designed to help you enjoy the outdoors. To find out more, check out their website at www.drburkenstocks.com.

Bloodsport Crossbow Arrows: Get the Most out of Today's High-Speed Bows